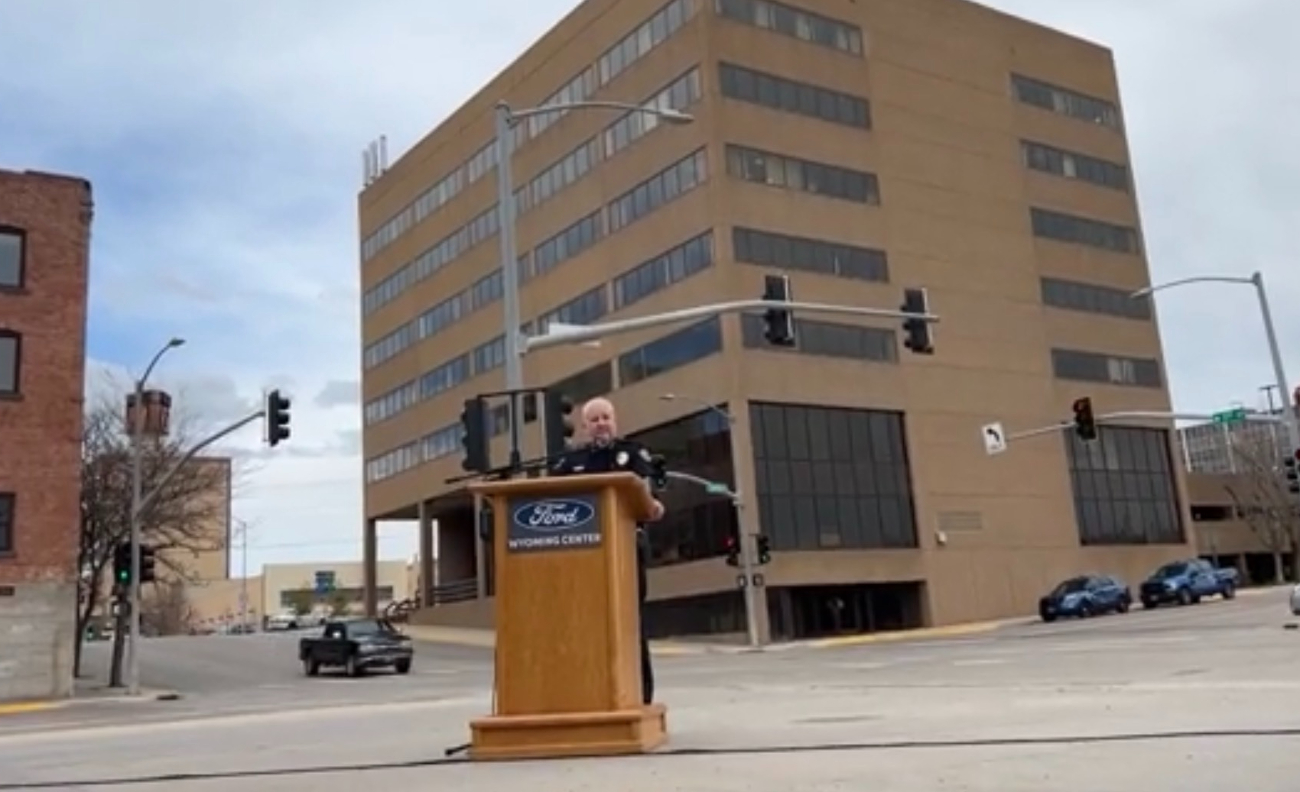 Casper Police Chief Keith McPheeters discussing the purchase of the Casper Business Center, visibile in the background, at a press conference on May 11. (Brendan LaChance, Oil City)

CASPER, Wyo. — The City of Casper is looking to hire Kansas City–based Police Facility Design Group to complete designs for the renovation of the Casper Business Center, the building at 123 W. 1st St., which the city recently purchased to house police headquarters, municipal court and other city functions.

The Casper City Council will be asked to consider authorizing a contract with the firm during its Tuesday, May 17 meeting. If the contract is approved, the city could pay Police Facility Design Group up to $2,061,978 for the project.

The City Council authorized the $8 million purchase of the Casper Business Center at a special meeting in April, a purchase that ate up most of the $9 million in American Rescue Plan Act funds the city received, according to City Manager Carter Napier.

The exact cost to renovate the 41-year-old building will not be known until a design is complete and the city puts the project out to bid. The city plans to pay for the renovations starting with its $11.2 million in remaining federal CARES Act funds, then turn to the $5 million in its Opportunity Fund if needed, Napier said at a May 11 press conference. He added that he thinks it unlikely the city will need to dip into reserve funds that are supposed to remain dedicated to other purposes.

If the City Council approves the contract with Police Facility Design Group, the firm will provide architectural design and construction administration services for the city’s new police headquarters at the Casper Business Center.

Police Facility Design Group conducted a police headquarters needs assessment for the city in 2019, and the firm helped provide consulting when the city considered the purchase of the Casper Business Center, according to a memo from Casper Police Chief Keith McPheeters. The firm has conducted an on-site evaluation of the building.

A “local subject matter expert” retained by the city has helped evaluate whether Police Facility Design Group is the right choice to design the new police headquarters, according to the memo from McPheeters. That individual looked at the firm’s pricing compared with local and national trends and looked at the firm’s expertise when it comes to designing and engineering police facilities.

Other municipalities as well as state governments have also considered using federal money to pay for infrastructure projects like Casper is doing with the police headquarters project, McPheeters said in the memo.

“Specialized design and engineering services are rapidly being contracted, and the demand for these specialized services has already resulted in increased delays,” he added. “It is the recommendation of the Casper Police Department that the Architectural Design and Construction Administration Services contract be executed without delay so as to avoid unwarranted delays in this project. Likewise, the existing relationship with PFDG has proven to be effective, cost efficient, and beneficial to the City.”

“Therefore, it is our recommendation that Council authorize the City to enter into contract with PFDG to perform the architectural design and construction administration services for the new police headquarters, for which PFDG would be paid an amount not to exceed $2,061,978.”

The design process is expected to take 6–12 months, with the renovation of the Casper Business Center expected to be complete in 2–3 years, Mayor Ray Pacheco said at the press conference last week. Meanwhile, some city functions are expected to move into the building immediately, according to McPheeters.

The driving factors in the city’s interest in the Casper Business Center were its central location and its potential to become the new home of police headquarters, dispatch, municipal court and other city services at a more affordable cost than constructing a brand-new building, Napier has said.

Details regarding why the police department sees a need for a new headquarters are explored in this article about inadequacies McPheeters pointed to during a tour at the Hall of Justice in February.