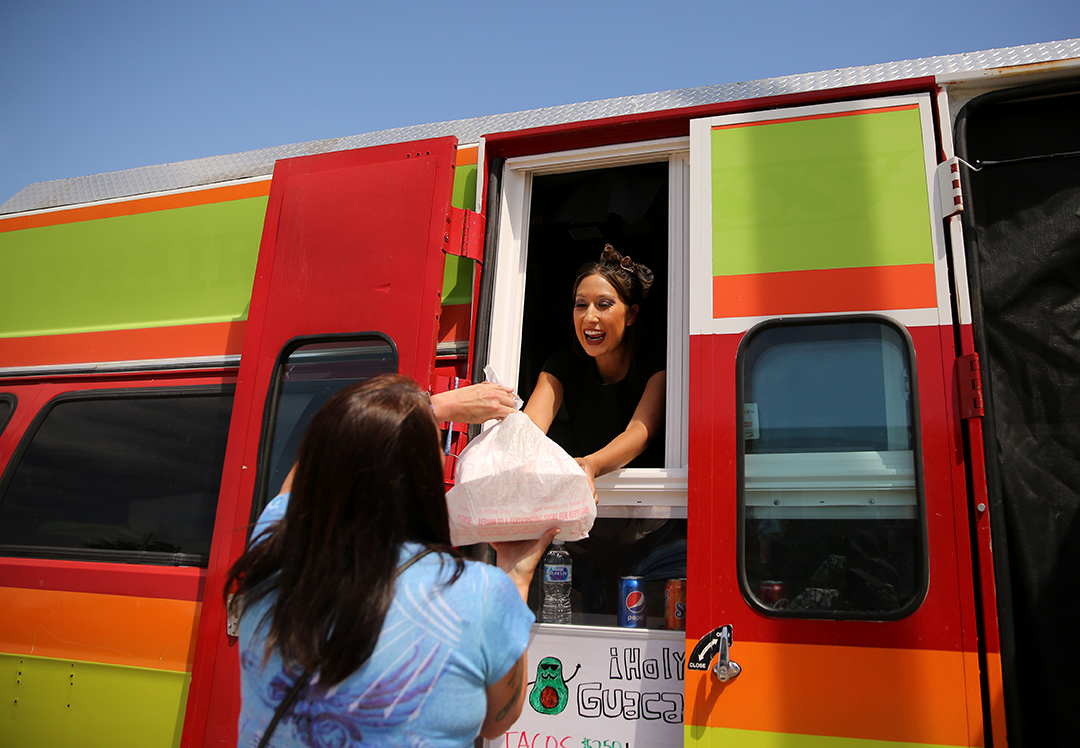 Angelina Saldivar hands an order to a customer out of the Holy Guacamole food truck in Casper. (Dan Cepeda, Oil City)

CASPER, Wyo. — The Casper City Council is considering some changes to rules for food trucks and other mobile vendors.

Special restrictions on food trucks currently apply to a three-block section of 2nd Street between Durbin and David Street downtown. Food trucks are only able to park and serve customers in this area if they get a mobile vendor parking permit co-signed by a downtown business or property owner.

Food trucks can only get permits to operate for up to two consecutive days on the same block face in the restricted area downtown under current rules. The proposed rule change would extend that to up to three consecutive days, city staff explain in a memo on the topic. The cost would remain $25 per space per day.

The proposed ordinance changes would also clarify that food trucks are able to park and operate out of the Goodstein parking lot off of Collins Drive in the Old Yellowstone District. The city is leasing that parking lot from the state and built several special parking spots to accommodate food trucks when it renovated the lot, a project completed in fall 2021.

The food truck parking spaces in the lot allow access to electrical outlets. The proposed ordinance changes would allow food trucks and mobile vendors to use the electrical outlets if they pay a $15-per-day fee to the city. A $300 damage deposit would also be required, the draft rules show.

With some ambiguity in the existing rules as to whether food trucks can park in parking lots, the proposed rule changes would explicitly allow mobile vendors the ability to park on city-owned or city-managed lots.

A requirement that mobile vendors get a health license from the City of Casper was removed from Casper’s ordinances in fall 2019.

“This was done due to the fact that mobile food vendors must obtain a food permit from the State of Wyoming and another from the County Health Department, and therefore Council believed it was a duplicate permit,” the staff memo states.

However, the requirement was not removed from the rules for mobile vendor parking permits in the restricted downtown area. The proposed ordinance changes would remove that city health license requirement for food trucks getting permits to park along 2nd Street.

There are some other tweaks to the ordinance being proposed, with full details available in the City Council’s work packet.

The City Council will consider the proposed changes on first reading during its Tuesday, May 17 meeting. Ordinance changes require approval from the City Council on three separate readings.