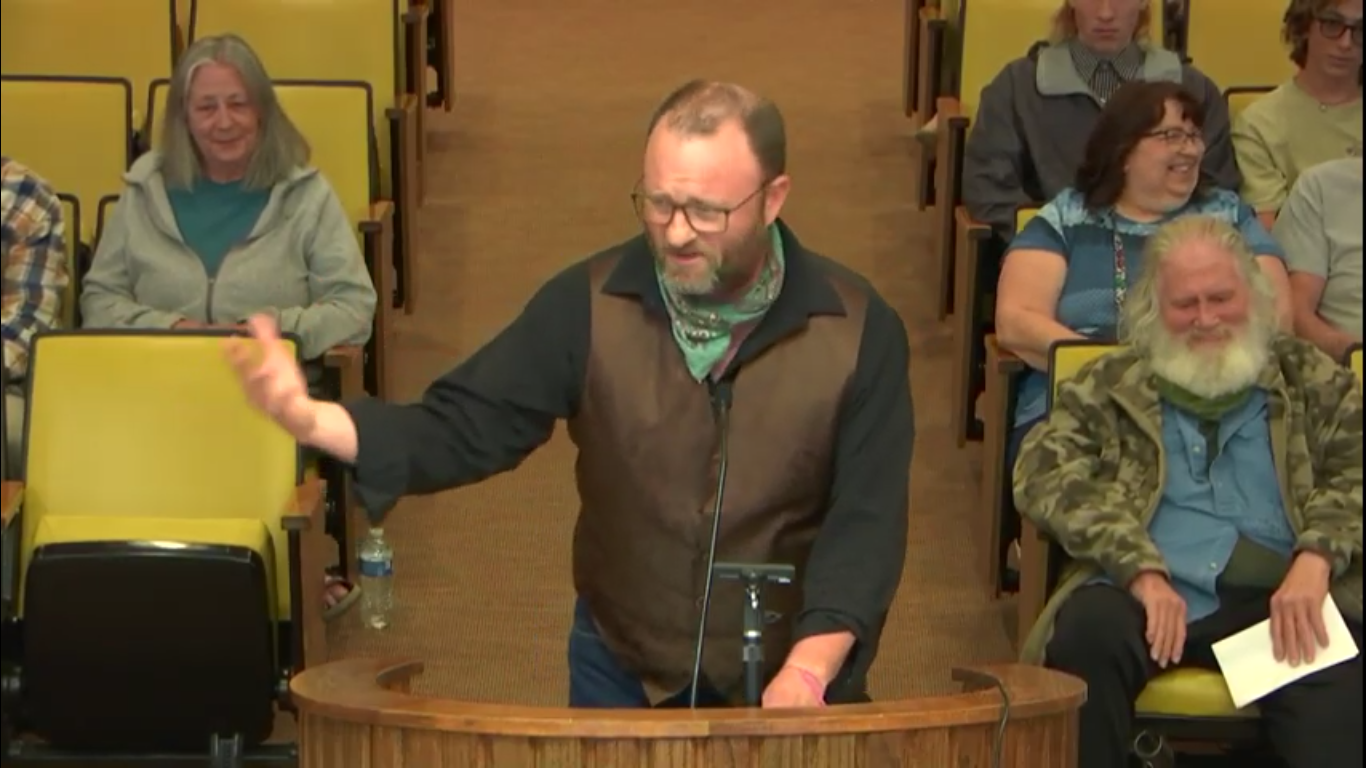 Chad Lore tells the Casper City Council fines for parking on the parkway are hurting his family and his neighbors. (Screenshot via City of Casper, YouTube)

CASPER, Wyo. — A number of people told the Casper City Council on Tuesday, May 17 that they don’t like that the city has been fining people for parking on the parkway in front of their own homes.

The parkway is the city-owned space between a street and a sidewalk that is often covered in grass. Chad Lore told the City Council he has been parking on the same spot in front of his home for 23 years.

Lore said he finds it ironic the city is fining people for parking on a piece of land called a parkway.

“It is not called the ‘do not parkway,’ it is called the parkway,” he said, adding that the neighborhood he lives in has narrow streets. “The parkway is the only safe place for us to park.”

Lore said he talked to a city official who said he will have the opportunity to avoid fines by applying for a parkway parking permit: “All I would need to do is fork up some dough.”

“For those of us who have lived here for most of our lives, it smells,” Lore said. “It smells like a dead fish. Smells like extortion. You are profiting off of my family’s safety.”

Lore said that others in his neighborhood have also been ticketed and he thinks it is in poor taste for the city to start issuing fines when people are financially struggling after the COVID-19 pandemic.

“This is not fair and I’m drawing the line,” Lore said. “My family’s safety is not for sale. It is truly audacious that after two years of COVID restrictions and families struggling to get by, the city hits us with this ticky-tack outdated preposterous ordinance.”

“The people ticketed in my neighborhood are mostly on fixed incomes: retired teachers, retired Army veterans, a contractor, a nurse. Some are working extra jobs just to make ends meet. It is nothing short of despicable to charge these people for a safe place to park.”

Lore noted that residents have often put their own money, time and effort into paving parkways in front of their homes.

“Did the city pour the concrete, add the gravel, remove the dead trees? No, the upkeep has been done by the homeowner,” Lore said.

While Lore spoke passionately about the parkway parking issue, he concluded by extending an invitation to all members of council to come to his house for pizza.

After several more people spoke on the issue, Mayor Ray Pacheco said the City Council is looking to expand a parkway parking permit program citywide and is trying to find a solution that works both for the community and the city government. The City Council is considering $100 fees for the first year for the permits with $25 annual renewals, City Attorney John Henley said Tuesday.

Pacheco said the first-year costs would work out to around $8 per month, adding that he thinks the City Council wants to find an ordinance that both recognizes that the parkway is city-owned property and acknowledges that it is property owners who maintain that space. The parkway parking ordinance is unlikely to please everyone no matter what the City Council decides, Pacheco added.

Parking on the parkway has been illegal for many years, Councilmember Amber Pollock said, adding that the City Council launched a pilot parking on the parkway program in spring 2021 at the behest of Councilmember Bruce Knell. The pilot program is limited to 12th and 13th Streets between CY Avenue and McKinley Street. It allows residents in that area to obtain permits to pave the parkway in front of their homes in order to have parking space off of the street. The pilot permit program allows people to pay a $250 fee to the city in order to pave that space at their own expense. There is also an annual fee of $50 to renew the permit.

When the council launched that program, it also directed city staff to again start enforcing parkway parking rules throughout the city.

Pollock said she thinks the City Council’s intention in launching the pilot program was to see what happened and either expand that program citywide or eliminate it entirely. She said she has been in touch with one of the residents who spoke to the City Council on Tuesday who has been getting warnings about parking on the parkway in front of his home.

The proposed citywide program the City Council is considering would provide a legal route for anyone to get a permit to park on the parkway, Pollock said. She encouraged anyone who has thoughts about what a fair fee structure is or other aspects of how the permit program should run should show up to the Tuesday, June 7 meeting, when the City Council will consider a new ordinance to implement the citywide program on first reading.

Councilmember Steve Cathey said part of the reason for requiring permits is to ensure people aren’t paving and parking on parkways in places that would obstruct the views of traffic, causing safety issues.

Councilmember Kyle Gamroth said he could understand why some people are concerned about the fines for parking on the parkway, but said the “majority of communities don’t allow parking on parkway at all,” adding that he thinks there are some good reasons to consider a permit program.

Councilmember Lisa Engebretsen said that while some people appropriately pave and safely park on parkways, most people who utilize the parkway are doing so in a problematic way. She said people often park campers, trailers or boats on the parkway, blocking the view of traffic, and added that the City Council’s goal is to find a solution that works for everyone.