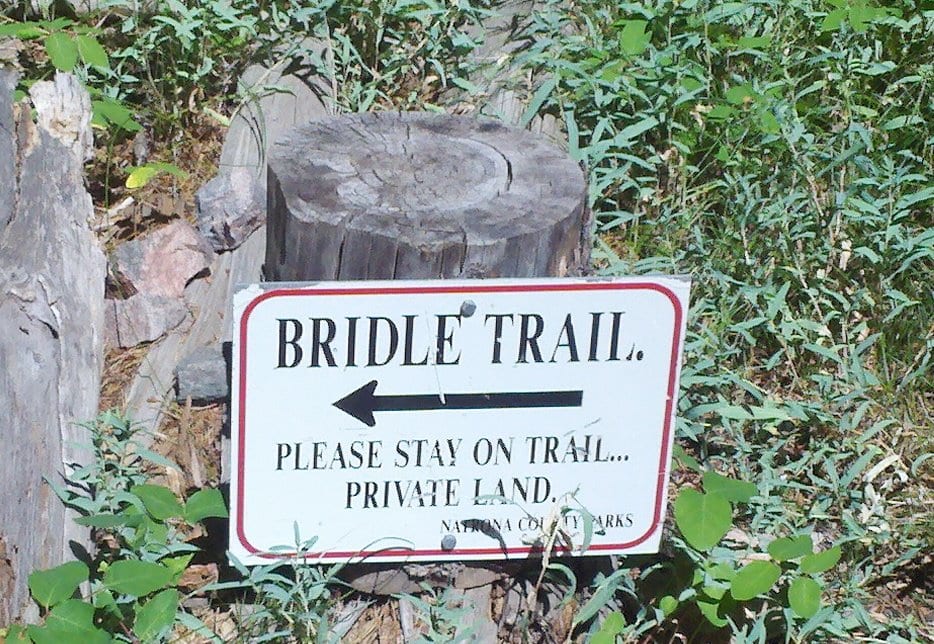 CASPER, Wyo. — Natrona County and Howard Christman will meet this week for another attempt to resolve an issue over a 90-year-old portion of the Bridle Trail that traverses Davis Way and Christman’s private property.

For at least 12 years, Christman has reported vandalism, fires, drug use, and prohibited nighttime use of the trail by a minority of the trail users. He said Tuesday that an average of 57 people come by on each day of the weekend.

In 2020, the county built a new section of trail that, for all but a few yards, bypasses Christman’s property. It was an attempt by the county to “thread the needle” and provide the public with trail access while also respecting private property rights, county attorney Eric Nelson told Oil City.

There was an assumption by county parks officials that once the trail was complete, access to the trail around Chistman’s property would be blocked off by some means. There was also an assumption by county officials that Christman would grant the county an easement for the small sliver of the new trail that crosses the very southeast corner of his parcel boundary. Then-commissioner Forrest Chadwick expressly said that his vote to approve the building of the new trail section was “contingent” upon a subsequent signing of the easement.

As of last week, neither assumption has been fulfilled, and access to Davis Way remains open, effectively allowing users to trespass. In December 2020, the county parks department briefly placed boulders on the trail blocking access to Davis Way. Parks director Mark Haigler told Oil City at the time that he was directed to remove them.

“I think we have a failure to communicate, or some selective amnesia,” Christman told the commission Tuesday. He said his understanding of the agreement was that the county would, in addition to building the new trail, also block off access to Davis Way.

“My recollection was that we were going to do the trail, you were going to give us an easement,” said Chairman Paul Bertoglio. “I don’t recall anything about us blocking the trail.”

“We did our part,” Commissioner Rob Hendry told Christman, adding that the county had spent about $103,000 on the design and construction of the new trail section.

Bertoglio and Hendry told Oil City that they may still be amenable to blocking access, but have been waiting for Christman to sign the easement granting access in perpetuity to the small section of new trail that remains on his property. They added that it has been difficult to maintain contact with Christman on the matter.

There is some ambiguity, Nelson said, about the public’s right to access Davis Way itself, if not those surrounding portions of the Bridle Trail. Christman told Oil City that Davis Way is a private road. Nelson said that was unclear as of Friday, though Christman certainly has the right to fence off the shoulder of the road where the Bridle Trail emerges on Davis Way.

Nelson also said that part of the trail was built in the 1930s by the Civilian Conservation Corps. That work, as well as lore surrounding some historical or implied easements by previous property owners, forms the basis for a belief held by some outdoor user groups that the area was meant for public dedication, Nelson said. He added that the previous county attorney shared those beliefs.

When the commission approved the new trail in June 2020, Nelson told the commission there were no “express” or “recorded” easements at the county he could find to support that claim. He said Friday that the trail stakeholders may consider submitting their documentation on the road’s status to judge in order to force a ruling one way or the other.