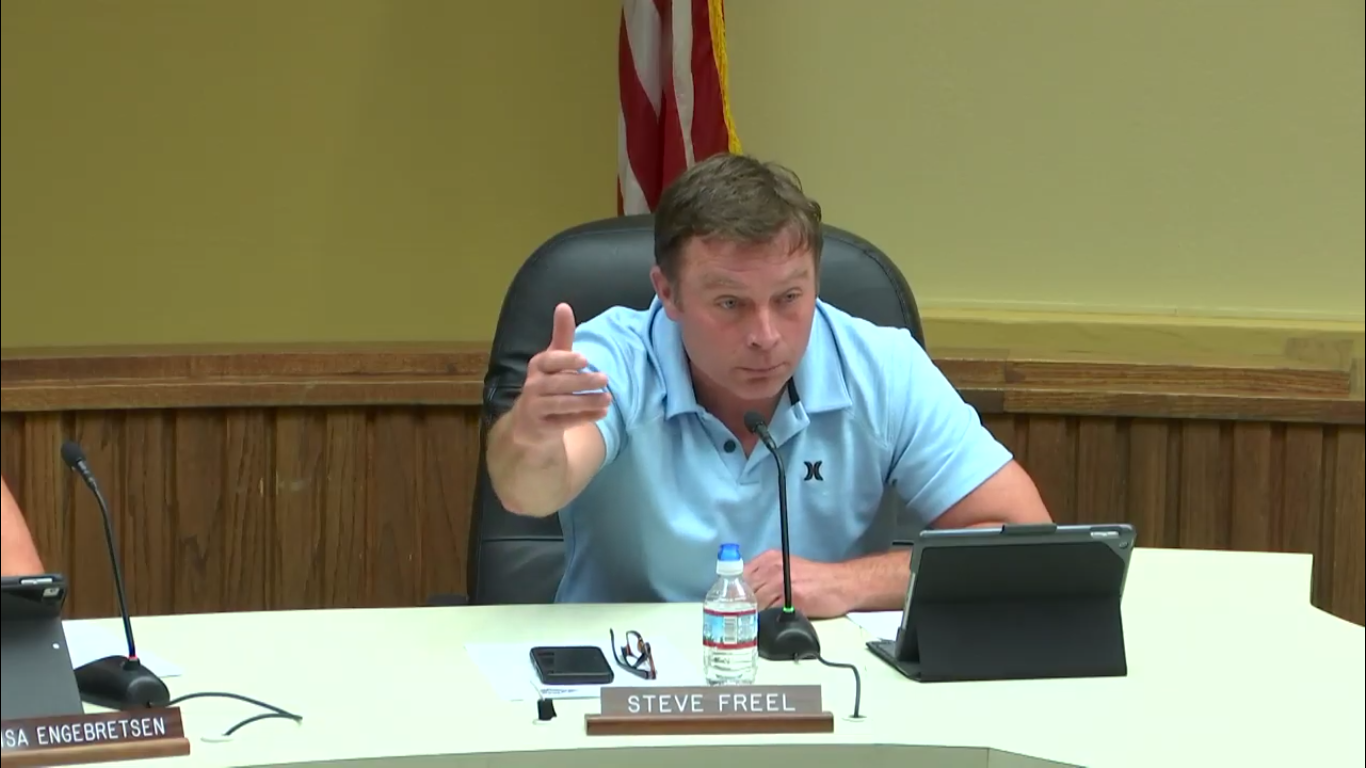 Vice Mayor Steve Freel was the only member of the City Council to vote against rules expanding a parkway parking permit system during second reading on Tuesday. (Screenshot via City of Casper, YouTube)

The permit system would require residents wanting to park on the parkway, the city-owned space between a street and a sidewalk often covered in grass, to pave the parkway at their own expense in a manner approved by the city. Residents would also be required to pay an annual fee for a permit giving them the exclusive right to park on the parkway in front of their home.

The city currently has a pilot parkway parking permit program limited to 12th and 13th Streets between CY Avenue and McKinley Street, with parking on the parkway prohibited elsewhere in the city. The fees for the pilot program include a $250 initial fee plus a $50 fee to renew the permit. The city council plans to do away with the $250 initial fee and lower the annual permit fee to $25. The City Council would need to pass a resolution to set the new fees separately from the ordinance changes it is in the process of considering.

While the City Council was initially looking to expand the parkway permit system citywide, Councilmember Steve Cathey proposed an amendment on Tuesday to limit the permit program only to narrow streets. People would not be able to pave and park on parkways if streets are wide enough to accommodate a 12-foot travel lane sandwiched between eight-foot street-side parking lanes. The City Council adopted this amendment on a vote of 7–1.

Vice Mayor Steve Freel was the lone member of the City Council to vote against both Cathey’s amendment and the ordinance itself during Tuesday’s meeting. Councilmember Bruce Knell was absent on Tuesday.

Freel, who was absent when the City Council’s first reading vote took place on June 7, said he questions the idea that the city will charge people to park on parkways when residents are already asked to maintain that city-owned property at their own expense.

“I still find it rather ironic that the parkway is public property owned by the government that you, by law, have to maintain and keep up, but if you want to park there, we’re going to pass a rule that says we’ll allow you to park there on public property but now you’ve got to pay us to do that,” Freel said.

In addition to his opposition to charging people for permits to park on parkways, Freel said he thinks the City Council has been spending far too much time discussing the issue.

“I’m against this,” he said. “I think it has been a colossal waste of time and I hate to put it that way, but it really has been.”

With parkway parking debates dating back years, Councilmember Shawn Johnson agreed that the City Council has “spent a ridiculous amount of time on this.” However, he said that some type of permit needs to be in place if residents are to be given exclusive rights to park on parkways. Otherwise, Johnson said he thinks the city would be in violation of a constitutional provision against gifting exclusive rights for private use of public property for free.

In terms of where the city is prohibited to allow this, City Attorney John Henley pointed to Article 16, Section 6 of the Wyoming Constitution. That section reads as follows:

(a) Neither the state nor any county, city, township, town, school district, or any other political subdivision, shall:
(i) Loan or give its credit or make donations to or in aid of any individual, association or corporation, except for necessary support of the poor; or
(ii) Subscribe to or become the owner of the capital stock of any association or corporation, except that:
(A) Funds of public employee retirement systems and the permanent funds of the state of Wyoming
may be invested in such stock under conditions the legislature prescribes;
(B) The legislature may provide by law for the investment of funds not designated as permanent funds of
the state in the capital stock of any association or corporation and may designate which of these funds may
be invested. The legislature may prescribe different investment conditions for each fund. Any legislation establishing or increasing the percentage of any fund that may be invested under this subparagraph shall be passed
only by a two-thirds (2/3) vote of all the members of each of the two (2) houses voting separately.
(b) The state shall not engage in any work of internal improvement unless authorized by a two-thirds (2/3) vote of the people.

Councilmember Jai-Ayla Southerland asked whether it might be possible to allow people to pave parkways and park on them without a permit provided any resident was allowed to park on a paved parkway. If the rules were written to allow anyone to park on a paved parkway, the city could then offer a permit to people who want to formally secure exclusive use of the parkway while others could take the risk of having someone else park on a parkway they had paved in front of their residence, she suggested.

Henley said that parkway parking rules are in place not only to ensure the city isn’t giving away exclusive use of public property for free, but also to ensure parkways are used in a safe and aesthetically pleasing manner.

Councilmember Amber Pollock asked whether it is common for cities to require residents to maintain parkways, to which City Manager Carter Napier responded by saying it has been common in the communities he has worked in.

“Why do we have parkways?” Pollock added. “What it the point of them?”

Two main purposes of parkways are to add some green space to a streetscape and to offer some safety by creating a buffer between pedestrians using the sidewalk and vehicles using the street, Napier said. Councilmember Lisa Engebretsen added that she thinks parkways give cities opportunities to widen streets if funding is available to do so.

Prior to the City Council’s debate, resident Bruce Dangle asked the council to do away with any fees for the permits. He listed off other sources of revenue for the city:

Dangle added that he doesn’t understand why residents are allowed to park on other public property such as parking lots or along streets without paying a permit fee but will be required to pay to park on parkways under the proposed rules.

Councilmember Kyle Gamroth said he appreciated Dangle sharing his perspective, adding that he doesn’t think revenue generation is a factor in the City Council’s consideration of the parkway permit system. Gamroth said he thinks it is likely the city will lose money in terms of what it will cost to administer the permit program if the program advances with $25 annual fees.

With Dangle also asking whether he would need to get separate permits to park different vehicles on a parkway he has paved, Gamroth asked for clarification as to whether the city will use stickers or placards.

The city would use placards allowing people to move a permit between vehicles, Napier said that he recommended.

With Dangle also having expressed some concern about whether residents would be able to do maintenance work on their cars, Pollock asked for some clarification from Napier.

The city manager said the city is not interested in ticketing anyone for conducting routine maintenance on their own vehicles in driveways, along streets or on parkways. However, the city does prohibit people from using their residential driveways as spaces like commercial businesses would to earn money fixing other people’s cars, Napier said, adding that the city also intervenes when it receives complaints about abandoned or junk vehicles parked around Casper neighborhoods.

With the City Council advancing the parkway parking permit rules on second reading Tuesday, it would need to pass the rules on third and final reading at its next regular meeting before the changes would become official.

The proposed ordinance changes can be reviewed in the following document from the City Council’s work packet: