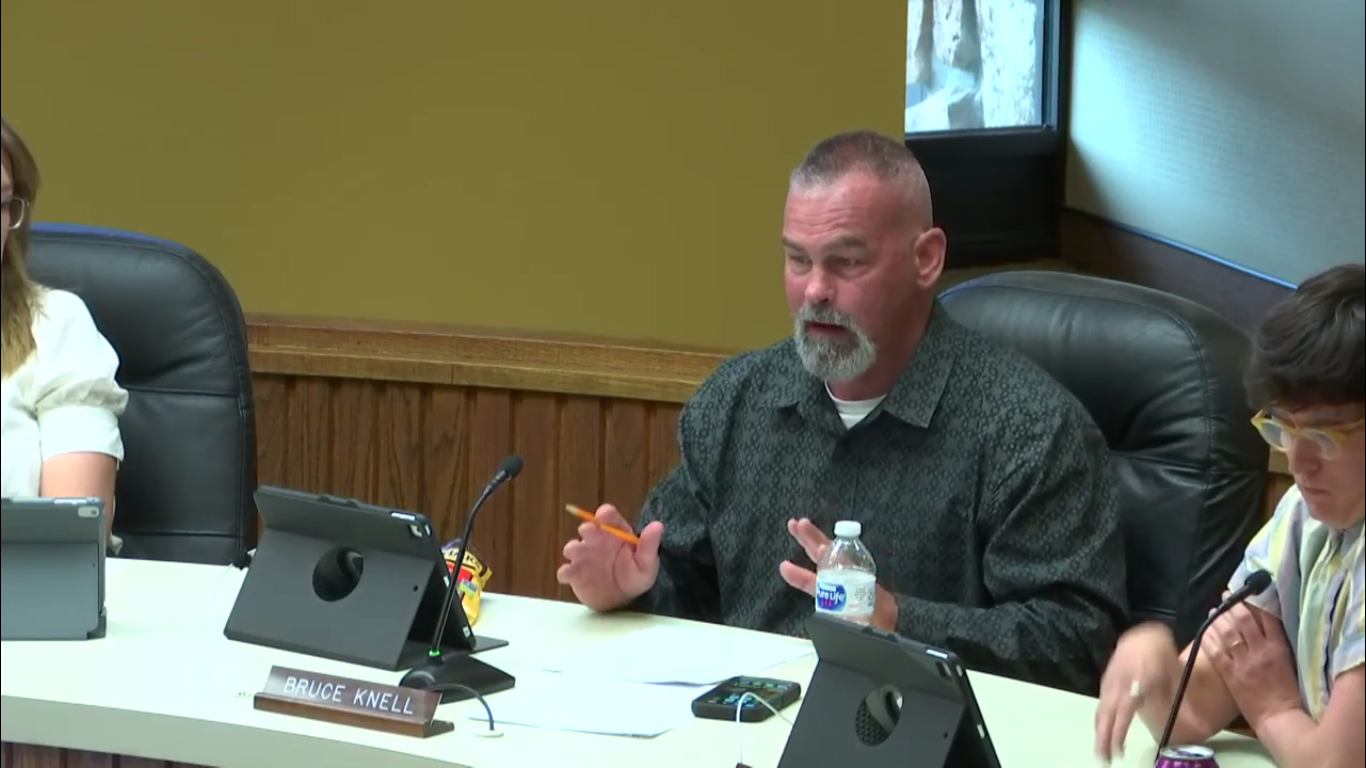 City Councilmember Bruce Knell on Tuesday expressed some frustration about media stories not including everything that gets said during council discussions and encouraged residents to watch full discussions on the City of Casper's YouTube channel. (Screenshot via City of Casper, YouTube)

CASPER, Wyo. — On Tuesday, a Casper resident urged the City Council against closing any swimming pools after councilmembers floated such ideas during the June 28 work session.

Rhonda Aune told the City Council that she has been a member of the Friends of Washington Park Pool for about 15 years and that the work session talk of possibly closing that pool is not the first time the idea has arisen.

“This comes up about every four years,” Aune said. “They want to shut our pool down; they want to make it a splash pad.”

While splash pads can be fun, Aune said they don’t offer the same opportunities for learning that swimming pools do.

“I’m very much in support of our outdoor pools,” she told the City Council. “Our children need to be out, they need to be learning how to swim. We have our North Platte River running right through town. People are out there rafting in kayaks, innertubes. [If] they don’t learn how to swim in a confined area with lifeguards, that’s very concerning to me.”

In addition to the river, people spend a lot of time recreating at Alcova Lake, and swimming pools help people gain skills that make it safer to recreate in places where there are no lifeguards, Aune said.

While Washington Park Pool was identified during the work session as potentially the most likely candidate for a pool closure due to its proximity to the Casper Family Aquatic Center, Aune said she doesn’t think the two facilities should be compared.

The pool is also being well utilized by residents, Aune added.

“I think this summer there has been more kids at Washington Park Pool than there ever have been and that’s a really cool thing to see,” she said.

Marion Kreiner Pool should also stay open as it is important to North Casper, Aune said.

Aune urged the City Council against closing swimming pools as a way to cut costs.

Councilmember Bruce Knell, who said during the June 28 work session he would support anything that reduces city spending at the Casper Recreation Center, emphasized that discussion during the work session doesn’t equate to anything like a final decision of the City Council.

Knell added that he thinks media coverage of the City Council can tend to sensationalize discussions and leave out aspects of what gets said.

“They pick out just the parts of what I want to say to make their paper look really good, which obviously irritates the hell out of me,” Knell said. “But with that said, if you watch the actual meetings and watch the entire dialogue that goes on amongst this group of people and what is really said on every end of it, these are just ideas that are being thrown out on us. Nobody is saying we’re shutting down anything.

“I would urge people before they get too hoity-toity to maybe go back. YouTube has every meeting we’ve ever had and you can literally look and see every dialogue that’s been made because it is all filmed. Because I can tell you we are not being treated very fairly up here.”

All Casper City Council meetings can be viewed at the City of Casper’s YouTube channel.

Councilmember Kyle Gamroth said he spent a lot of time at Washington Park Pool as a kid. He said some people seem to have the impression that the City Council is considering closing more pools than what has actually been talked about.

“There are a couple pools that within the next several years will require significant capital investment, and what we are doing right now is just having a discussion about what our current outdoor pool needs are as a community, what our current capacity is, whether we are over capacity and, if so, would it be prudent of us to explore closing a pool that was going to require significant capital investment,” Gamroth said.

While money is part of the conversation, Gamroth added that the City Council would think about whether an area is under-served by recreational opportunities before acting on any idea to close a facility. He noted that the reason a pool like Marion Kreiner came up in the work session discussion is because it needs significant investment in a new filtration system if it is going to be able to operate into the future.

The City Council is trying to balance a host of needs, and talk about swimming pools is just a part of a greater discussion related to one-cent optional sales tax revenues, Gamroth added. Staff’s proposal for use of one-cent revenues over the next four years would include about $1.3 million to subsidize swimming pool fees should voters renew the tax this November.

“In addition to having to find money to potentially replace or significantly rejuvenate the pools, one-cent is also being used to artificially decrease the rates at those pools,” Gamroth said. “Wanting to keep all of the pools open, try to keep the rates the same, try to keep nonprofits supported and try to increase our streets budget, which is chronically underfunded — it is an impossible task.

“We are certainly going to try to do our best, but I hope this is an illustration to the community about how difficult these decisions are [and] how helpful community input is for us making these decisions because, again, there is no right or wrong, black or white answer.”

Councilmember Amber Pollock thanked Aune for providing her perspective regarding swimming pools and for paying attention to what was discussed during the work session. While decisions aren’t ever formally decided on during work sessions, ideas often begin to grow during those sessions, Pollock added.

Similar to what Knell said regarding the media, Pollock said the way a work session is reported on may give people the impression that a councilmember is calling for something to happen when they are really just trying to brainstorm along with the rest of the City Council.

In the swimming pool instance, Pollock said people may have gotten the impression she was suggesting pools be closed in town when her intention was to ask whether the city has the right number of pools to serve its population. While she said work session discussions are important, it is also important for people to know that ideas that arise in work sessions “can die a thousand deaths.” On the other hand, Pollock said it can still be valuable for people to communicate with the City Council early in a discussion before anything formal is put together toward a final decision.

Pollock emphasized that the City Council has made no decision toward closing any pools in the near future. Based on the June 28 work session discussion, city staff will come before the City Council at the end of the swimming season to continue the discussion surrounding the city’s pool inventory and whether it should consider any closures.

The full discussion during the Tuesday, July 5 meeting can be reviewed via the City of Casper’s YouTube channel: