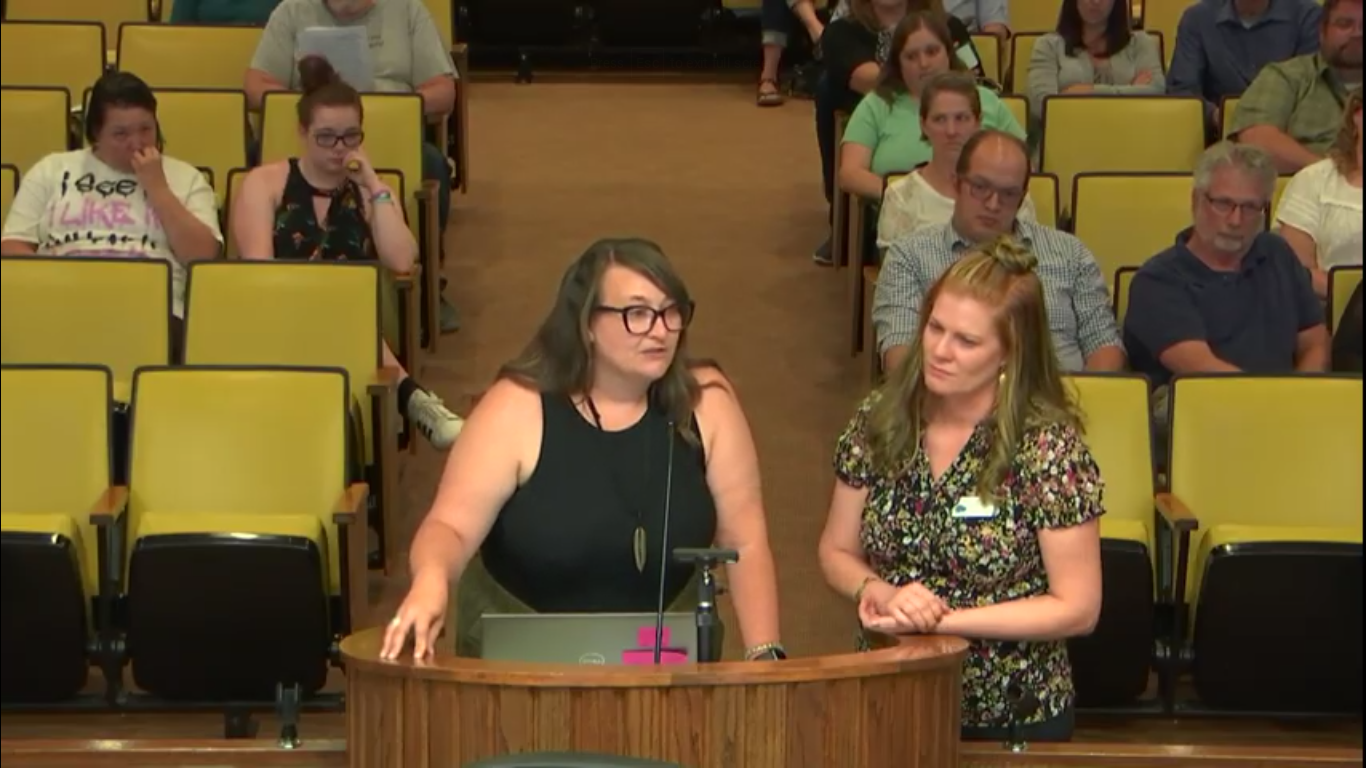 Prior to the public comment period during the meeting, Mayor Ray Pacheco reminded people that the City Council has yet to make any final decisions as to how one-cent money would be spent over the next four years should voters choose to renew the tax this November.

Anna Wilcox, director of Learning and Development at the Wyoming Nonprofit Network, spoke on behalf of the range of nonprofit organizations that stand to lose support from one-cent under the staff proposal. A total of $3,052,000 in one-cent revenues was allocated to nonprofits during the current four-year one-cent cycle.

“Nonprofits currently funded by one-cent are providing critical services that both support and work in tandem with your city services, with our city services,” Wilcox told the City Council. “Most are doing so with minimal funding, using funds that they raise annually through many facets.”

Organizations that stand to lose support under city staff’s proposal are asking the City Council to consider what costs the city would incur if the nonprofits were not providing the services they do.

“Could all of this be accomplished within the city’s budget?”

The City Council should consider the return on investment it is getting from supporting nonprofit organizations, Wilcox said.

“If you spend $3 million on streets over the next four years, you get $3 million of improvement on the streets and we greatly appreciate that — at no point are we negating the need for infrastructure and funding to go toward that,” Wilcox said. “But if you invest $3 million into nonprofits, you not only receive that back in services, you are also less likely to incur additional costs over that based upon the negative impact of those services not existing within our community.”

The nonprofit organizations that would be impacted by the staff’s proposal are preparing a document to show how they would be impacted if they were to lose one-cent support. That document will be made available to the City Council in time for its July 12 work session discussion of one-cent priorities, Wilcox said.

With more people than usual in attendance at Tuesday’s City Council meeting, Councilmember Kyle Gamroth said he thought it was encouraging to see people getting engaged in person as opposed to complaining about things online. He said that the perspectives people bring to the City Council are valuable to its decision-making process.

“We’re just nine people from the community; we don’t have the perfect answer,” he said.

Gamroth noted that a survey of Natrona County residents conducted this spring didn’t find funding for community assistance to be high on the list of priorities that people want the one-cent tax money to support. The top priority was repairing streets, with community assistance ranked 14 out of 16 categories the survey asked about.

The reason streets are so high on people’s minds may be because a lot of people directly experience their condition on a regular basis, Wilcox said.

“We all drive the streets every day, so we feel the potholes,” she said.

The subtle kinds of service that nonprofits provide may be just as essential as infrastructure but harder for people to see, Wilcox said.

“People aren’t seeing the need for these services because they are currently being provided,” she said. “With this funding, the ability to provide those services makes the community less aware that those problems even exist in some cases.”

After some other residents urged the City Council to support nonprofit organizations, Councilmember Jai-Ayla Southerland made a similar point about the importance of the not-so-obvious services nonprofit organizations provide. In order to try to make those services more tangible, Southerland encouraged people to think about such human services as their own kind of infrastructure.

In addition to physical infrastructure like streets and water pipes, “there is also a social fabric,” Southerland said.

“$1 in prevention saves $10 in incarceration, treatment costs,” she said.

Vice Mayor Steve Freel said his experience in law enforcement makes it clear to him that nonprofit organizations fill a gap in needs that the city would otherwise have to take care of and spend more money on.

“While I appreciate that we need to fill every pothole in town, I’d like to fill maybe half of them and everybody can just drive the nice streets for a while because of the fact that we still have business that needs to be taken care of,” Freel joked, adding that he thinks the City Council needs to think big picture when it comes to deciding what should be done with one-cent revenues.

Susan Burk, community liaison with Central Wyoming Hospice and Transitions, encouraged the City Council to keep in mind that a city is more than its streets and pipes. When considering where to direct one-cent tax revenues, she said the City Council should think of the people who would be impacted if services didn’t exist.

The wording of the spring survey gauging what Natrona residents want to see happen with one-cent tax dollars could have influenced their responses, Burk added, noting that the survey asked about “community assistance programs” rather than using the term “nonprofit.”

If the term “nonprofit organization” had been used in the question, people may have been more likely to think of some of the following organizations that received support from one-cent during the current four-year cycle, Burk suggested:

Councilmember Bruce Knell acknowledged that surveys have limitations and said he thought the concerns people brought up on Tuesday helped show how important one-cent is for Casper. The City Council will do its best to come up with a set of priorities to receive one-cent money over the next four years and the input residents gave during the meeting would be valuable toward that end, he added.

A number of people who spoke Tuesday specifically urged the City Council to continue supporting the Natrona County Library. Councilmembers also received a lot of emails and phone calls about the library, Councilmember Amber Pollock said.

Pollock thanked people for sharing that correspondence. With some people thinking the City Council was talking about closing the library, Pollock added that there was never a proposal to do so. In addition, the library is owned by Natrona County, and the City Council has no control over its operations.

City staff used results from the spring survey as well as direction from the City Council to come up with the proposed plan for use of one-cent revenues over the next four years. That survey can be reviewed in the following document:

The city estimates one-cent revenues will total $64.5 million over the next four years. Staff’s proposed plan, which can be modified by the City Council, can be reviewed in the following document: