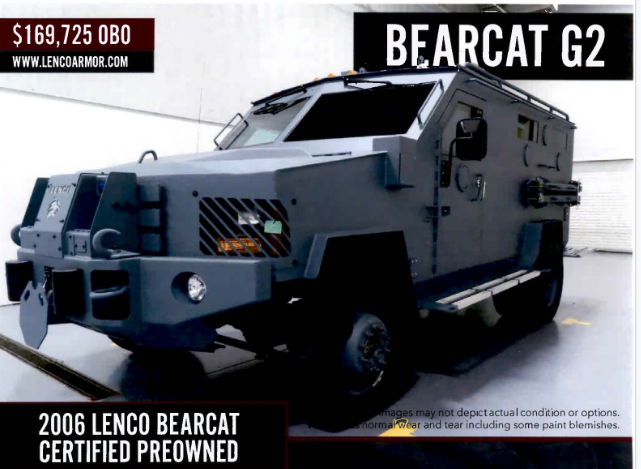 NOTE: This article touches on the topic of suicide. Please read at your own discretion.

CASPER, Wyo. — On Tuesday, the Casper City Council indicated it is OK with the Casper Police Department moving forward on negotiations to purchase a used certified preowned Lenco BearCat G2 Incident Response Vehicle that is currently listed at $169,725 or best offer.

If the purchase ends up happening, the Casper Police Department would have the vehicle painted blue rather than black or desert camouflage, Police Chief Keith McPheeters told the City Council. The police department takes the community’s perceptions seriously and while he thinks the vehicle is needed, McPheeters emphasized that he thinks it is misguided when law enforcement agencies elsewhere have used military-style vehicles with more “aggressive” appearances in ways that may intimidate people.

“It is going to be blue,” McPheeters said. “It will be appropriately labeled. … This is a rescue vehicle.”

The financial advantage of the specific vehicle the police department is looking at is that it has been refurbished with things like a new drivetrain and engine.

“[It] might as well be a new vehicle for, roughly speaking, half the cost,” McPheeters said.

If the city is to purchase the vehicle, McPheeters said in a memo that it could use money in its Opportunity Fund. That fund has about $5.5 million in it, Financial Services Director Jill Johnson said Tuesday. Councilmember Lisa Engebretsen asked if those Opportunity Fund dollars were needed for the renovation of the Casper Business Center into a new police headquarters.

As City Manager Carter Napier was not present on Tuesday, an answer to Engebretsen’s question was not immediately provided to the City Council.

Councilmember Kyle Gamroth asked McPheeters whether he had any data available about whether Casper has seen an increase in officer-involved shootings. While the police chief didn’t have specific numbers on hand, he said he thinks Casper historically averaged one officer-involved shooting every four years, but that there have been around eight such incidents in the past four and a half years.

McPheeters cautioned against drawing too many conclusions from the estimates he provided, but said that it does seem to be the case both locally and nationally that violent incidents are on the rise.

He added that armored vehicles like the one the police department is considering not only offer protection for officers but also have been shown to be a good tool for de-escalating situations. McPheeters said the vehicle could have been used in a number of recent situations.

Gamroth asked if McPheeters could point to specific data about such vehicles helping de-escalate situations. McPheeters said the National Tactical Officers Association has a lot of such data available.

Engebretsen asked whether the chief could share data about crime rates in Casper to help inform the City Council’s decision.

The police department is working on its second quarter 2022 report, which will be made available to the City Council once complete, McPheeters said. He highlighted a few statistics during the work session, saying that automobile burglaries are up in Casper over 100% compared with the same time in 2021.

McPheeters also shared some data regarding the police department being dispatched for reports of a suicidal individual. He said such calls are up 5% from the same time in 2021 and that suicide attempts are up 18%. At the same time, suicides are down about 50%. McPheeters said this suggests the police department is getting better at how it responds to people dealing with suicidal ideation.

Southerland asked whether the police chief was aware of any downsides to having such a vehicle in Casper. McPheeters said that he is not aware of evidence that such a vehicle would contribute to an increase of violence in the community.

On the other hand, the police chief said that there have been a number of problems related to communities bringing military-style equipment in. One of the major problems has related to public perception when equipment closely resembles military vehicles, McPheeters said. The vehicle the Casper Police Department is considering strikes the right balance of not appearing overly aggressive while being able to meet the department’s needs in responding to things like active shooter situations, McPheeters said.

The other problem law enforcement agencies have encountered when bringing military equipment in is high maintenance costs, McPheeters said. This is another reason the Casper Police Department is looking at the Lenco BearCat G2 Incident Response Vehicle. The police chief told the City Council he expects the department should be able to get “a couple of decades of use” out of the vehicle.

The Natrona County Sheriff’s Office has an armored vehicle, and Southerland asked McPheeters to talk about why the Casper Police Department thinks it needs its own.

While the police department can request assistance from NCSO for use of its vehicle, McPheeters said it is possible there will be times that that vehicle is already deployed elsewhere when one is needed for an incident in Casper.

The Special Response Team that mans the NCSO armored vehicle includes members of the Casper Police Department, McPheeters noted. Therefore, the Casper PD doesn’t necessarily need to request the use of the vehicle, but rather the deployment of the vehicle is a decision of a joint jurisdictional team.

Deploying that team, on the other hand, may be slower than the Casper Police Department being able to deploy its own, McPheeters said.

Vice Mayor Steve Freel, who was formerly an assistant police chief in Casper, said that the department has had armored vehicles in the past, albeit smaller than the one that is currently being asked for. He said the vehicles have proven useful in talking barricaded subjects, including suicidal subjects, out of houses.

Freel said speed of mobilization of multiple-jurisdiction teams and equipment has always been an issue, noting that time is of the essence when such equipment is needed. He noted there could be a situation where the Special Response Team is responding to an incident in Glenrock when something happens in Casper and an armored vehicle is needed.

Not having the equipment could potentially cost someone their life, Freel said.

Freel also suggested the police department consider sharing something each day with the City Council about significant incidents officers responded to. He said being aware of what the department deals with on a daily basis may be necessary for people to really understand why the police department makes requests like the one it is currently making for the armored vehicle.

Councilmember Amber Pollock said she appreciated the perspective Freel and McPheeters shared. She has heard from some people uncomfortable with the purchase of an armored vehicle and said she might refer those people to Freel or McPheeters for more information.

Pollock added that she thinks “continued transparency” on the part of the police department is important when it comes to people’s discomfort. It was in response to this point that McPheeters talked about why the department plans to have the vehicle painted blue.

Gamroth said he appreciated the discussion on Tuesday and that he thought the police chief provided a lot of good reasons why the armored vehicle is needed. On the other hand, he said he remains uneasy about the purchase.

Southerland said that she was initially hesitant about the request, but that the detail she heard during the discussion on Tuesday eased some of her concerns. If the purchase is to happen, she added that the certified preowned vehicle the police department is looking at “seems like the right choice fiscally.”

Southerland added that she thinks it is important that the City Council try to encourage a constructive dialogue around the topic with the community.

Tuesday’s discussion of the armored vehicle starts at around the one-hour mark in the following video of the work session on the City of Casper’s YouTube channel: