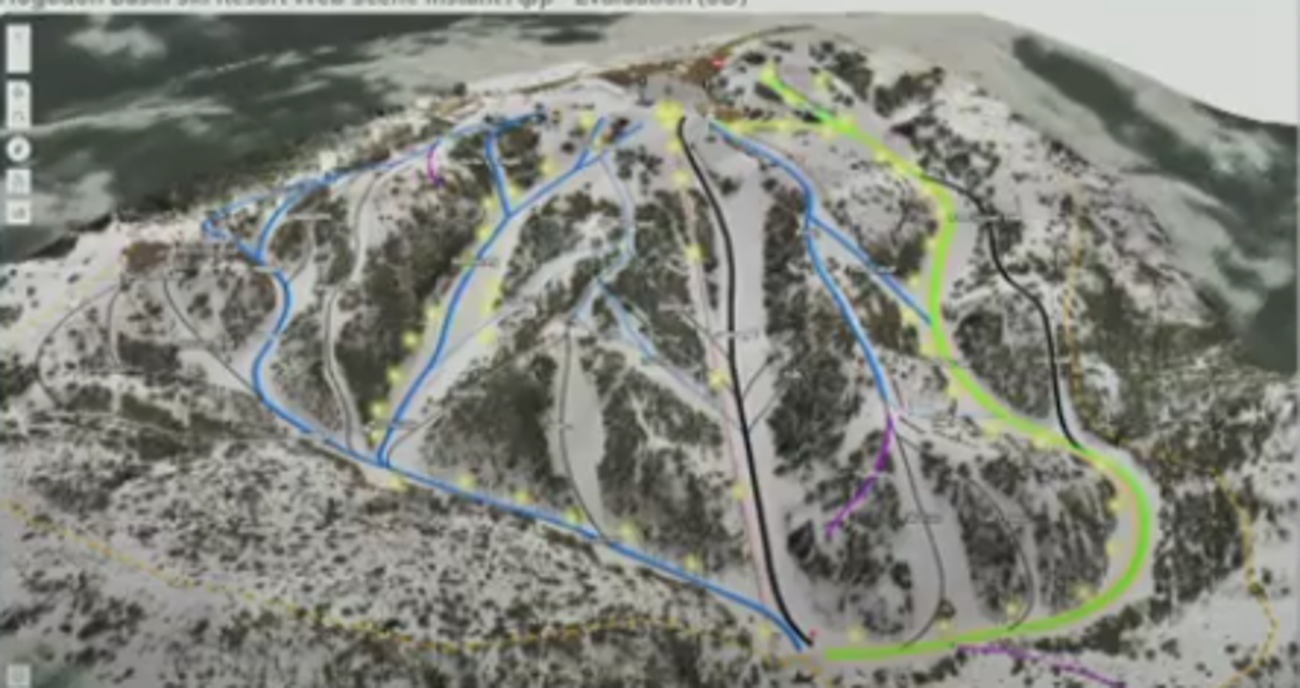 Image from a new map being developed for Hogadon that will allow users to see which runs are open and closed and other information. (Screenshot via City of Casper, YouTube)

CASPER, Wyo. — On Tuesday, the Casper City Council heard a presentation regarding the subsidy the city provides to allow Hogadon Basin Ski Area to operate.

Jan. 29 was the busiest day overall at Hogadon with 836 skiers. That happened despite some runs still being closed, Lopez said. It wasn’t until Feb. 13 that all 28 runs were open. Hogadon was able to offer 87 total skier days during the season.

While Hogadon saw one of its best years in terms of cost recovery, Lopez noted that it remains a subsidized operation. With one of the City Council’s goals being to look at ways to reduce subsidies coming out of the General Fund, Lopez presented some ideas staff is working on.

Eliminating ski days is not the answer to reducing subsidies, according to what Lopez presented. Hogadon is profitable even on slow days during the season; it is largely the cost of year-round personnel that drives the subsidy, Lopez said, adding that staff are needed throughout the year for things like maintenance.

Expanding revenue-generating activities in the summer is something that has been explored. When the City Council approved a contract extension with OVG 360, formerly known as Spectra Venue Management, for the operation of food and beverage service at Hogadon this July, Lopez noted the adjusted agreement added incentives for OVG to bring events like summer concerts to Hogadon.

There are existing summer activities at Hogadon, including about three miles of hiking and biking trails, Lopez said. The lodge is also rented out for events, particularly weddings.

Another way to reduce the subsidy would be through corporate sponsorships or the selling of naming rights at Hogadon, Lopez said, adding that the city has asked OVG to look for such opportunities.

The city is in the process of renegotiating a lease agreement with Mountain Sports for ski rental operations. The new agreement is expected to include a slight increase to what Mountain Sports pays the city from revenues it sees through rentals, Lopez said.

A new interactive map showing open runs and other information is being prepared for the upcoming season, which Lopez said could help drive more interest in Hogadon. In addition, staff is looking into the possibility of entering a new partnership with an Indy Pass program that would involve the Indy Pass company paying Hogadon when skiers from other resorts come to Hogadon, Lopez said.

Visit Casper also purchased a bus that the city can use when Visit Casper isn’t using it to drive skiers up and down the mountain, Lopez noted.

The city is also in talks with Natrona County Parks about possible new agreements to coordinate discounts for people using both Nordic trails and downhill skiing.

Ideas that could really help change Hogadon’s direction include expanding its snowmaking and harvesting abilities to expand the season, as well as adding lighting to the Dreadnaught run and the terrain park, Lopez said. The city is planning to apply for grant funding available through the Wyoming Office of Outdoor Recreation to add the lighting.

Dreadnaught is one of the ski area’s more popular runs, and lighting would give Hogadon the ability to add night racing there, Lopez said.

Before considering the variety of measures Lopez presented on Tuesday, the city was anticipating a subsidy for Hogadon of around $376,000 for the current fiscal year. Implementing the variety of changes presented could reduce that subsidy by as much as $100,000, Lopez showed the council.

That would not include changing pass or lift ticket prices this season, though the city may explore that ahead of the 2023–2024 season, Lopez said.

If the City Council wanted to reduce the subsidy in half by raising rates, Lopez suggested increases of around 10% would be needed. To fully eliminate the subsidy, 40% rate increases would likely be needed, but that could put rates at a point so high that Hogadon would struggle to find customers, she said. Increasing rates by 10% could also impact the ski area’s ability to attract skiers, she noted.

Councilmember Amber Pollock asked what type of attendance increase would be needed to reduce subsidies in half without raising rates. Lopez said staff could come up with such figures but did not have that immediately available on Tuesday.

Councilmember Steve Cathey said there is some point when high attendance would lead to long lift line waits and drive away customers. However, Lopez said that she thinks Hogadon likely has capacity to accommodate more skiers than it did even on its busiest day without crossing the threshold Cathey brought up.

Councilmember Lisa Engebretsen suggested Hogadon consider a partnership with a hotel to drive attendance at Hogadon. Some hotels already generate some business for the ski area, but Lopez said the city could explore more formal agreements.

The City Council indicated general support with the overall direction staff is heading with efforts to reduce the subsidy that Lopez presented on Tuesday. Some aspects of what she presented may require formal approval from the City Council at some point, she noted.