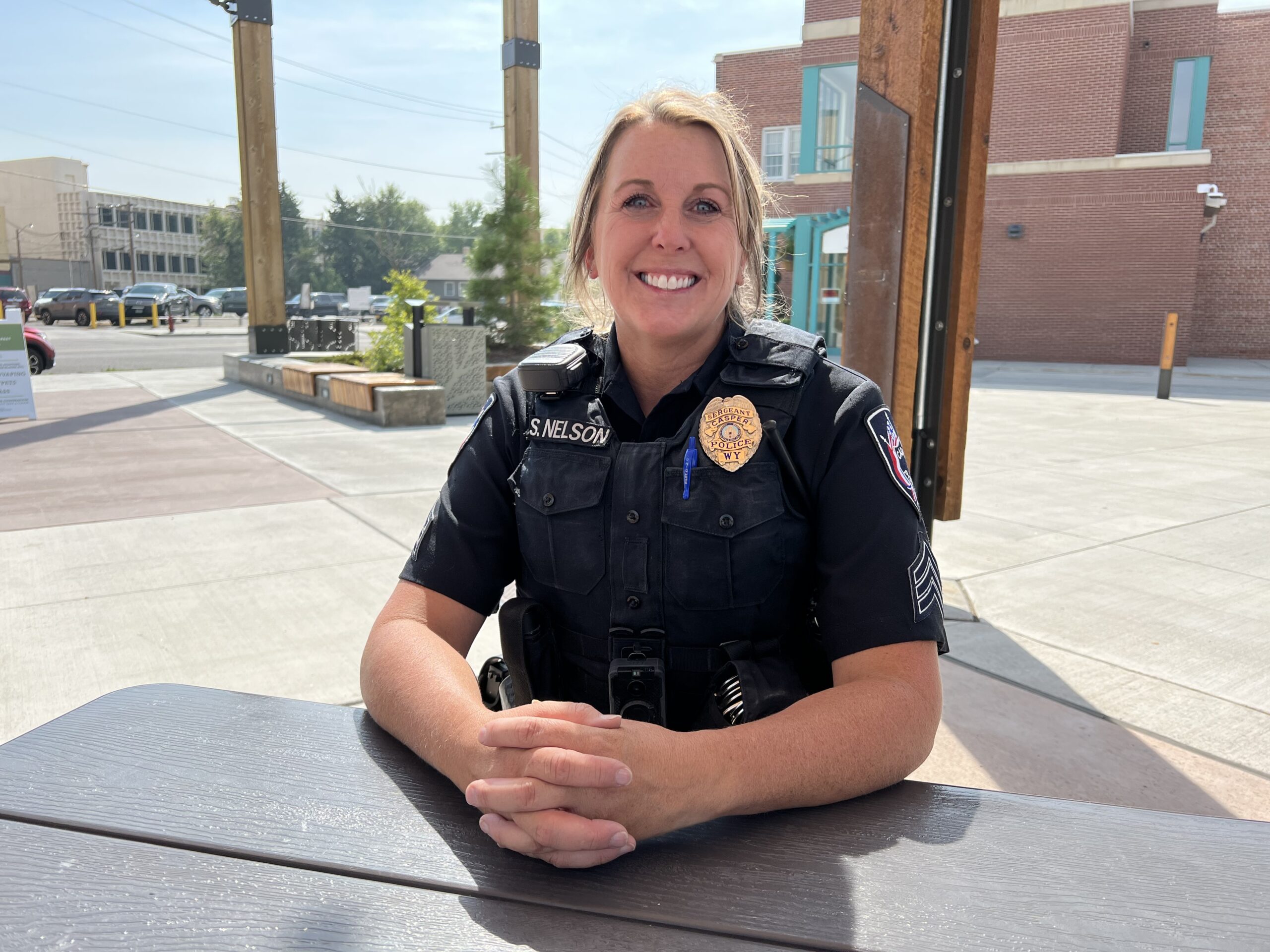 CASPER, Wyo. — School is back in session, and an over-17-year veteran of the Casper Police Department is starting her first full school year supervising school resource officers who provide services to the Natrona County School District.

Sgt. Sara Nelson started in the new supervisory role during the spring semester after the Casper PD’s previous SRO supervisor, Jeff Bullard, was promoted to lieutenant.

“It’s interesting working with the younger kids again instead of adults,” Nelson said Tuesday after driving from Kelly Walsh High School to David Street Station for an interview with Oil City News. “My office in my schools is Casper Classical [Academy] and I just bounce around schools helping out the resource officers if they have a bigger case.

“I go out and just kind of help and make sure they get what they need to be successful with their, you know, investigation or whatever they’re doing.”

Monday marked National Police Woman Day and Nelson said she encourages more women to consider a career in law enforcement. She didn’t start out in law enforcement but rather in fire service in northern Wisconsin, and also has extensive experience in emergency medicine.

“I’ve been a paramedic for 27 years and worked here at the Wyoming Medical Center for a number of years,” Nelson said. “I currently work part-time in Converse County on the ambulance just to keep my medic [credentials] up and keep those skills fresh and I still love that job. I love the interaction with people and using that set of skills to help people.”

When she was working as a flight medic, Nelson had an opportunity to work with the Natrona County Special Response Team as the SRT needed a medic during a two-week intensive training.

“I happened to be there and they asked if I would be interested in going,” Nelson said. “I went and that was a whole new experience for me.”

After that training experience, Nelson decided to pursue a career in law enforcement. One of the reasons she decided to get into law enforcement was because of the opportunities it offered to help proactively prevent tragedies rather than respond after a tragedy has already occurred.

“Through all those years of being a medic and the tragedies that I’ve seen — we as medics react,” she said. “We just get the 911 call, we go.

“As a law enforcement officer, you have a sense of preventing some of that, like that speeding car or that drunk driver. You can get them pulled over before they cause that tragedy — you have a little bit more of a piece of intervention.”

Prior to becoming the supervising sergeant for school resource officers, Nelson spent four and a half years a patrol sergeant with the Casper Police Department. She also spent over six years as a detective, specializing in investigating crimes against children. The ability to move between different roles is one of the things that appeals to her about law enforcement.

“There are so many avenues you can take — you don’t have to necessarily stay in patrol for your 20-30 years,” Nelson said. “Breaking up your career like that, it just keeps you fresh and ready to go to work because it’s something new and you want to put your 100% in.”

While any role in law enforcement can have its challenges and working with schools is no different, Nelson said one of the things about her new role that she’s enjoying is a move away from night shifts.

“I work 7:30 to 3:30 Monday through Friday, so no more night shift,” she said. “As you get older, you tend to cherish those Z’s a little bit more. That’s definitely been something that’s improved for me.”

“Most of the guys that are at the school, they play in gym with [students], they’ll interact, they’ll hang out with them at lunch and just kind of be that mentor,” she said. “I do think that’s a really good opportunity for kids to realize that we’re just people.”

While school resource officers may serve as mentors to some of the kids they interact with, Nelson serves as a mentor for those officers. In her previous supervisory role in patrol, she said mentoring was also one of the skill sets she leaned on.

Nelson said she draws on some of her own experiences in order to offer guidance to officers she supervises and to try and see when they might be in need of support. She witnessed challenging things during her time in patrol and as a detective.

“In patrol, in general, you might deal with 10% of the population over and over again and usually it’s not good — a lot of criminal activity and more heinous crimes,” Nelson said. “Like I said, as a detective, my specialty was crimes against children, so, you know, the worst of the worst.”

It is important for supervisors to pay attention to signs that the hard aspects of the job may be impacting an officer, Nelson said.

“If an officer gets in a position for too long, they might get jaded a little and just cynical,” she said. “We do see that and that’s when it’s time for a change. Sometimes that’s what we do is supervise and realize, ‘Okay, it’s time to move and let’s get you somewhere where you know, you can see the light too again.'”

With not only the Casper PD but also other law enforcement agencies in the region experiencing some unexpected deaths in recent years, Nelson said she thinks it is crucial for agencies to take mental health seriously. She thinks the Casper PD has been taking steps in the right direction.

“I think we are finally adding tools for officers to process things a little bit better — counselors, chaplains, peer support with other officers,” Nelson said. “We have a lot of that going on.”

“I never managed officers,” she said. “I managed people and that was probably my biggest thing. I want to know who my people are, who the families are. I want to know things about them because I’ll know when they come in and they’re off — is it because something’s going on at home? Did they not sleep today because it’s night shift? Is this something small that we can fix right away or is this something more?

“So knowing your people is the most important thing. The rest of it is all books and papers and policies.”

Having raised two children, Nelson knows that a career in law enforcement presents challenges when it comes to finding a good work and home life balance. While all officers may deal with such challenges, she said the way women experience this may be a little different than for men, particularly if they are mothers.

“I can’t say for a guy — I mean, they have their connection with their kids, but for a mom, it’s a different connection I think and that sometimes can be a hard balance,” Nelson said. “I’ve missed Christmases. I’ve missed birthdays. I’ve missed concerts.

In terms of men and women on the police department, Nelson said that she thinks their somewhat different skill sets can be complementary.

“We just have a different approach,” Nelson said of male and female officers. “Our brains are wired a little bit different and we bring a different perspective.”

In her own experience, Nelson said she tended to encourage fellow officers to slow down when coming onto a scene before rushing into a course of action. While that may have generally been the case, she added that there were times where a male officer would slow her down when she would get into a tunnel of thought.

Having both male and female officers can be particularly valuable when it comes to interacting with victims or speaking with offenders, Nelson added.

“I worked crimes against children,” she said. “So I dealt with a lot of sexual assaults, domestics, that type of stuff. I think having both a female and male officer is a really good course of how to investigate some of those crimes.

“I’ve had male offenders and I’ve had male victims and they’re not real comfortable talking to me about some real private things.”

On the other hand, females are often more comfortable communicating with a female officer. The Casper Police Department has received many requests from female victims of sexual assault asking that a female officer be assigned to their cases, and this is something the department strives to do whenever possible, Nelson said.

Although she encourages women to consider a career in law enforcement, Nelson said that it may not be right for everyone, men or women.

“It takes a different personality to fit into this type of career, even as a medic and a firefighter,” Nelson said. “I see a lot of type A, maybe type B kind of melding in there, but you have to have a certain fit to do this job, male or female.”

When it comes to younger female officers on the Casper PD, Nelson said she tries to serve as a mentor through sharing her own experiences with them and encouraging them to consider what route they want their careers to take.

“We don’t have like a female officer group or anything,” Nelson said. “I just try and check in on them and see, ‘Hey, is there anything I can do to help?” I’ve had a few conversations with the younger female officers, like, ‘Where do you want to go and in your career; here are the things that I’ve done.'”

In terms of the community, Nelson said she is happy she moved to Casper.

“I love the outdoors,” Nelson said. “I love to ski, I love the river. It just was a good fit for me. I’ve had such good interaction with the public. We should be proud of the community. I think it’s fantastic. You don’t get this type of community everywhere.

“So yeah, I really enjoy what I do and I love living here.”