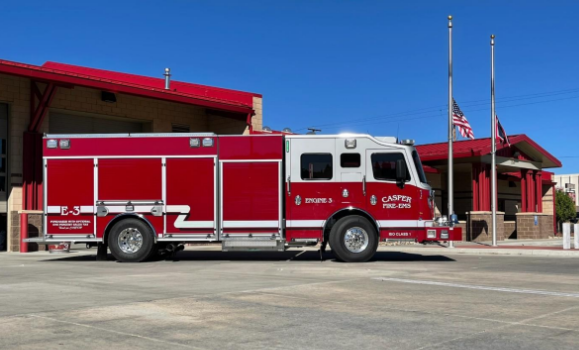 CASPER, Wyo. — Three new fire engines have arrived to help the Casper Fire-EMS Department respond to emergencies in the community.

Engines 2, 3 and 6 have all been inspected by Casper Fire-EMS personnel and will be placed into service this week, the department said in a press release on Monday. Ceremonies will be held for the first day of service for each engine at its respective station, and residents are welcome to attend.

The “wash-down” and “push-in” ceremonies that will be held for all three engines come from fire department traditions.

“The wash-down ceremony is performed utilizing water from the outgoing fire engine to ‘wash’ the new engine — both to clean accumulated dirt from the delivery drive and to bridge the old and new engines together,” Casper Fire-EMS said. “The ‘push-in’ ceremony dates back to the days of horse-drawn fire apparatus. With horses unable to push the fire apparatus back into a station, it would be up to the firefighters to push the horse-drawn engine back in following every response. This ceremonial function is demonstrated with all of the fire company’s members ‘pushing’ the apparatus into place.”

The three new engines have 2022 Rosenbauer Commander series chassis and are equipped with Waterous 1,500-gallon-per-minute pumps and 750-gallon water tanks. All three also feature new LED warning and scene lighting equipment, according to the fire department.

“Clean-cab” fabrication systems able to scrub airborne contaminants from the passenger areas of the fire engines are another highlight the department pointed to.

The previous Engines 2 and 6 are 2009 Spartan Gladiator chassis apparatus and will be converted to reserve, stand-by apparatus in the department’s fleet.