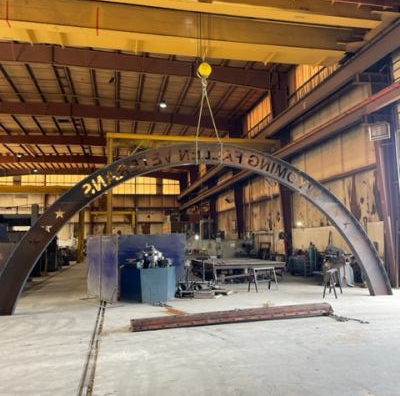 CASPER, Wyo. — On Tuesday, the American Legion George W. Vroman Post 2 got the green light it needed to begin installing a new memorial in Casper honoring Wyoming veterans who died in combat.

Dean Welch, an Iraq War veteran and post adjutant for the American Legion George W. Vroman Post 2, told the Casper City Council that installation could begin as soon as Wednesday if an agreement between the city and the veterans’ organization was approved.

A metal arch featured in the new memorial’s design is complete, and Welch said it will be “visible from quite a ways off” once it is installed at Patterson-Zonta Park, 3800 W. 13th St. in Casper. Austin Engineering donated steel and letter cutting for the arch, Wyoming Recycling donated steel for banding on the structure and High Country Fabrication donated welding labor, Welch noted.

“That’s going to be a fantastic addition to that part of town,” Knell said.

Welch, with the help of a committee, came up with the design for the new memorial. It is expected to include an arch structure, signage with the names of fallen veterans, lighting, flags, a walkway, benches and a donor recognition sign, a memo from city staff said.

Further details about the new memorial are available in this article based on an interview with Welch in May.

The staff memo and language of the donation agreement can be reviewed below: