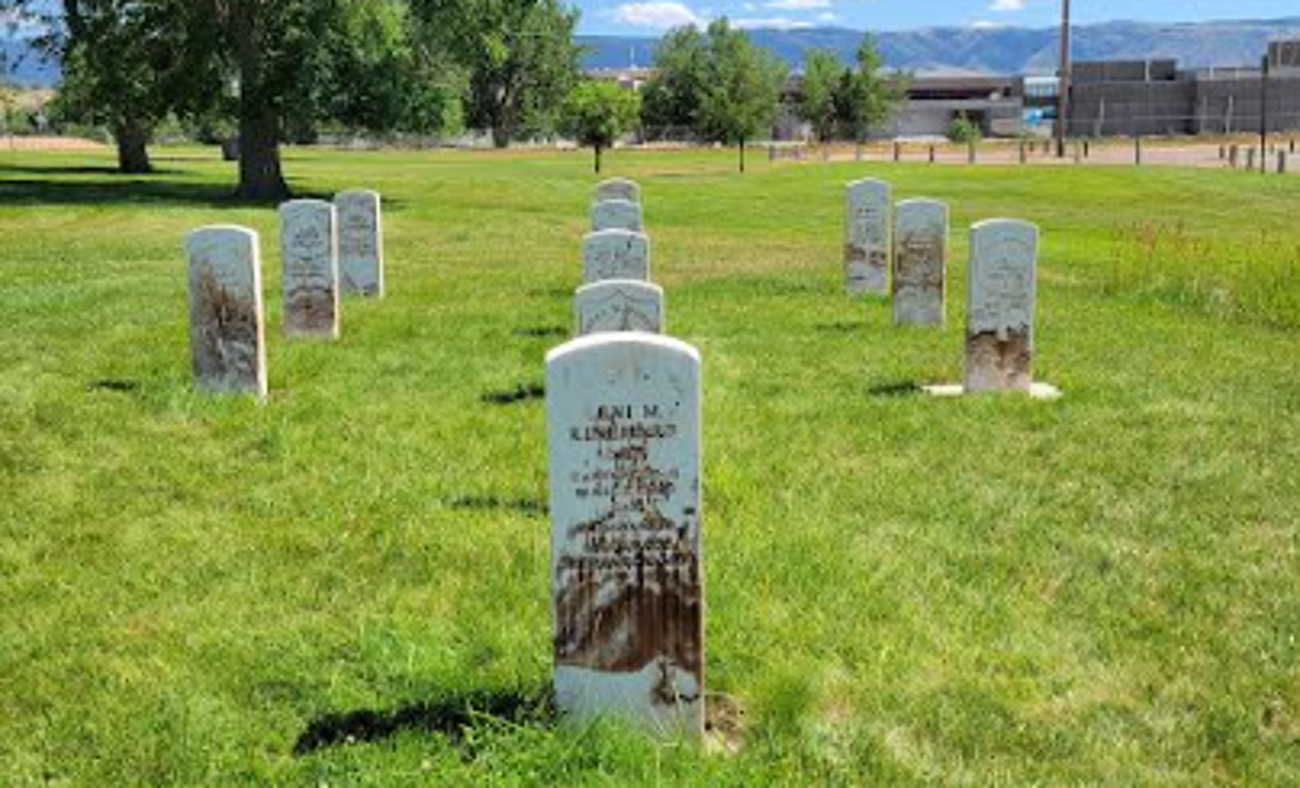 Headstones for members of the 11th Ohio Calvary at a site on the old Fort Caspar grounds sit adjacent to a site being considered for Chris Navarro's wind turbine sculpture. (Photo courtesy Johanna Wickman)

“Fort Caspar Museum Association would not be in favor of putting it there,” Johanna Wickman, vice president of FCMA, said.

Artist Chris Navarro’s sculpture design could be an interesting addition to the Casper area, but Wickman said she doesn’t think the site City of Casper staff identified as a possible home for the sculpture near Fort Caspar Museum is the right place to put it.

For one thing, the proposed site is an archaeological site as it was once part of the grounds of the old Fort Caspar. During the fort’s final years in 1865–1867, it covered a much larger area, including the spot highlighted in green in the following photograph that city staff identified as a possible place for the wind turbine sculpture:

The proposed site is also near a spot where bodies are interred, Wickman said. Museum staff confirmed that six bodies are interred in the area where a Grand Army of the Republic monument sits near the intersection of Fort Caspar Road and SE Wyoming Boulevard.

Those bodies include five male soldiers and one female body that were discovered in 1938 during construction of Fort Caspar Road. The five males could be identified as soldiers based on uniforms and uniform buttons, Michelle Bahe, curator of collections at Fort Caspar Museums, said Wednesday.

The bodies were then interred in 1939 to the place where the Grand Army of the Republic Monument was built in 1957. The female interred there was likely an emigrant, but it is uncertain when she or the five soldiers were originally buried, though it was likely sometime between the 1840s and 1870s, Bahe said. Oil City asked Bahe to confirm historic facts related to the area, but did not ask her to weigh in on the topic of the wind turbine sculpture.

A little further down Fort Caspar Road and closer to the proposed site for the wind turbine sculpture sits an unfinished cemetery project that the Fort Caspar Museum Association, a nonprofit organization separate from the museum itself, is working to complete, Wickman said.

There are currently 11 headstones for members of the 11th Ohio Cavalry who were killed in skirmishes during the Fort Caspar era, including one for Lt. Caspar Collins, Wickman said. There are 16 other soldiers from the 11th Ohio Regiment who deserve headstones based on the same criteria that led to the other markers being placed, she added.

An additional nine headstones should be placed for members of the 11th Kansas Cavalry who died in various skirmishes during the Fort Caspar area, Wickman added.

The first headstone that exists in the small cemetery was placed in 1969, but the project to add headstones petered out in the 1980s, Wickman said. The Fort Caspar Museum Association has recently discovered this and is working to add the other headstones and complete the project. The FCMA has already gotten the marble for the markers for the 11th Kansas soldiers, she added.

While the wind turbine sculpture might make sense somewhere in Casper, Wickman said it does not have a specific connection to Fort Caspar. While it could potentially draw more tourists to the area, an attraction of that nature wouldn’t fit with the atmosphere of the area where the nearby headstones and interred bodies are located, she added.

“I look at that area, because there are remains there, like sacred ground,” Wickman said. “To me, the fort side itself is not only a historic location but it is also solemn ground.”

Wickman said she views the area in question as a place for quiet reflection. The site being proposed for the wind turbine sculpture might make sense for a veterans monument, but the Stonehenge-themed tourist attraction just doesn’t seem right to her for this specific area.

“It is just not the right feel for a place like that,” she said.

There aren’t currently plans to excavate at the site that is being proposed for the wind turbine sculpture, but Wickman said she thinks it is best to leave the archaeological site undisturbed to avoid damaging anything that might be there and ensure access for possible excavations in the future.

“If you leave it there, it is essentially safe underground,” she said.

On Tuesday, the Casper City Council informally voted 7–2 in a straw poll in favor of moving forward with the proposed site near Fort Caspar Museum as the home for Navarro’s wind turbine sculpture. Mayor Ray Pacheco and Councilmember Amber Pollock voted no as they wanted to see a more robust engagement process with stakeholders before providing city land for the proposed wind turbine sculpture.

While the Fort Caspar Museum Association was not consulted prior to Tuesday’s discussion, some of the City Council members who gave support for moving forward with the sculpture at the proposed site said they wanted to see groups like the association consulted prior to a final decision.

Navarro himself expressed questions Tuesday as to whether there is enough parking at the museum to accommodate people visiting the museum. He expressed interest in finding a spot near the Ford Wyoming Center, where more extensive parking infrastructure already exists.

However, Vice Mayor Bruce Knell spoke against placing the sculpture near the Ford Wyoming Center because demands for parking could grow with a new indoor sports facility expected to be developed in the area, which could drive further development.

Knell and Councilmember Steve Cathey were the most vocal about moving forward on the sculpture without necessarily engaging in a more robust public engagement process. Cathey made the point that extensive public input processes have not been required when the City Council has been approached for the installation of other monuments on city land. Knell said that the museum shouldn’t necessarily have a say as to what is done with the proposed site for the wind turbine sculpture, noting that he doesn’t get to tell his residential neighbors what they can or can’t do with their own property.

Casper Parks, Recreation & Public Facilities Director Zulima Lopez said Tuesday she had informed museum staff about the proposal but had not yet informed the Fort Caspar Museum Association. She said she thought such conversations should happen if the site continued to be looked at as a potential home for the sculpture.

Wickman said Wednesday that she understands that the City Council has a lot of responsibilities and may not have been aware of the historic significance of the area being considered for the sculpture. She said that as consideration for the wind turbine sculpture project moves forward, she hopes the City Council looks to a different site.

“It is not that it shouldn’t exist or shouldn’t go somewhere else,” she said. “It just doesn’t belong there.”

Oil City reached out to the City of Casper’s public information officer for comment after speaking with Wickman on Wednesday, but did not receive an immediate reply.