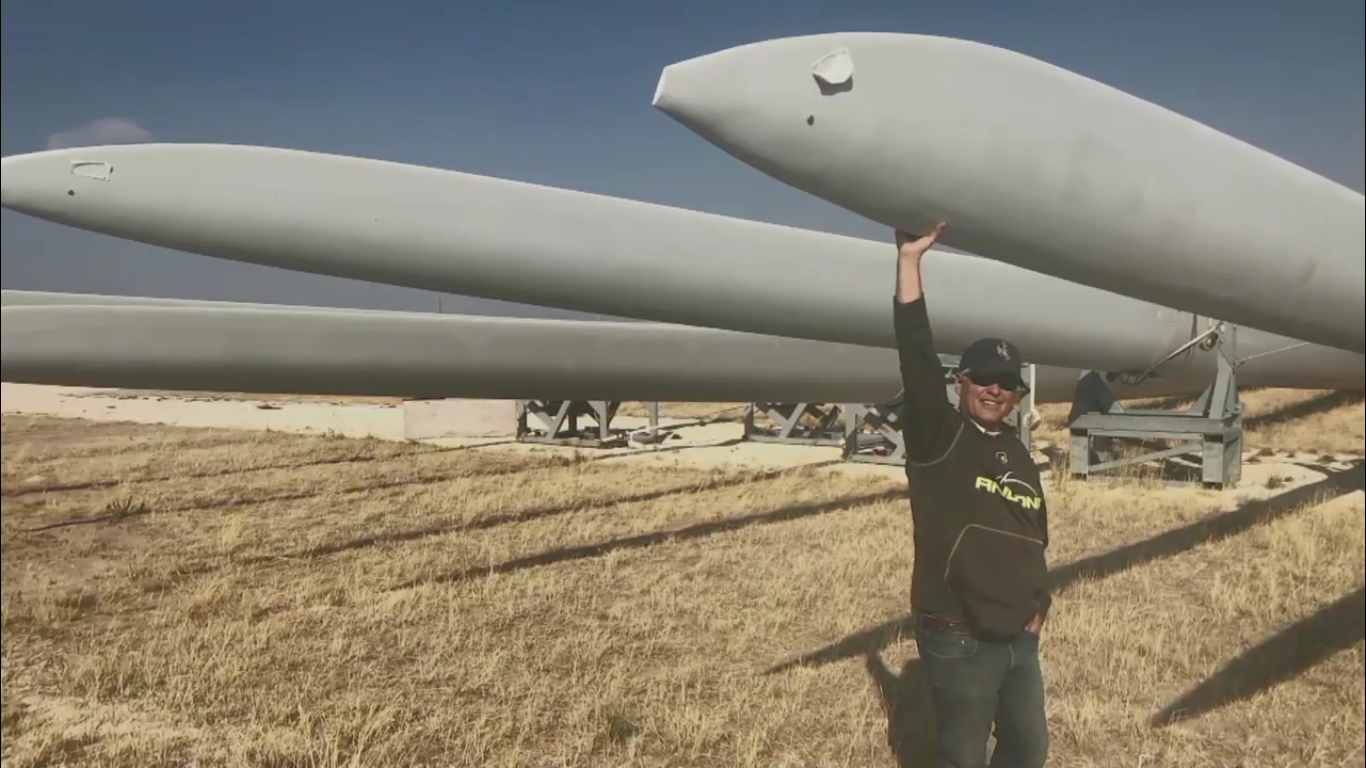 Chris Navarro standing under a windblade in a photo included in a video presentation of wind turbine art he wants to create. A design resembling Stonehenge is just one of various concepts he has created. (Screenshot via City of Casper)

CASPER, Wyo. — While discussing the cost the City of Casper incurs to operate Fort Caspar Museum on Tuesday, the Casper City Council discussed a potential hitch in the plan to construct a new sculpture at a site near the museum.

During its Sept. 20 pre-meeting work session, the City Council indicated support in an informal straw poll vote of 7–2 for moving forward with the spot near the museum for the construction of a sculpture resembling Stonehenge designed by Casper artist Chris Navarro that would be built out of retired wind turbine blades.

City staff had not yet had the opportunity to discuss the proposed site with the Fort Caspar Museum Association prior to the City Council’s discussion last Tuesday. On Wednesday, Oil City News spoke with Johanna Wickman, vice president of the FCMA, who expressed some concerns about locating the sculpture at the proposed site near the museum.

First, the proposed site is on grounds that used to be part of Fort Caspar and is therefore an archaeological site, Wickman said. There are also the remains of five male soldiers and one female thought to be a pioneer that are interred in the area where a Grand Army of the Republic monument sits. That monument is located near the proposed site for the wind turbine sculpture.

A little further down Fort Caspar Road and closer to the proposed site for the wind turbine sculpture sits an unfinished cemetery project that the Fort Caspar Museum Association, a nonprofit organization separate from the museum itself, is working to complete, Wickman said. While there are not bodies interred under headstones currently located there, the FCMA wants to add more headstones in honor of other soldiers killed in skirmishes during the Fort Caspar era.

Wickman said she views the Fort Caspar grounds, particularly areas where bodies are interred, as a sacred site.

As the City Council discussed the Fort Caspar Museum subsidy on Tuesday, Vice Mayor Bruce Knell brought up the wind turbine sculpture and its potential to bring visitors to the museum. Knell said he had received emails regarding concerns about the proposed site being located near a gravesite and asked if museum staff could weigh in on the issue.

Casper Parks, Recreation & Public Facilities Director Zulima Lopez, who was presenting regarding the subsidy to Fort Casper Museum, said staff have not yet had the opportunity to sit down with members of the Fort Caspar Museum Association to discuss the issue further.

While cautioning that she didn’t want to speak for the FCMA, Lopez said she thinks the FCMA as well as museum staff “would just want to respect the mission of the museum.” That doesn’t necessarily mean a spot near the museum can’t happen, but Lopez said she thinks conversation with stakeholders needs to happen to find something that works for all parties.

Knell said he is sensitive to concerns about bodies being interred nearby but still thinks building the wind turbine sculpture somewhere near the museum will be good for museum visitations.

“I don’t think any of us were aware that there was a gravesite there at the time we gave direction on that,” Knell said, noting that he definitely doesn’t want to see the sculpture actually built on top of a gravesite.

The proposed site is not directly above any known bodies. Whether there are artifacts or other things underneath the proposed site isn’t certain as there aren’t currently plans to excavate it. The bodies interred under the nearby memorial were discovered in the 1930s when Fort Casper Road was being constructed.

With the Stonehenge-themed sculpture to be built out of wind turbine blades and with wind energy playing a role in the Casper area, Knell said that the sculpture will have historical significance in the future if not today.

If the sculpture were to lead to a large number of tourists akin to the draw of the similar “Carhenge” sculpture in Alliance, Nebraska, Knell said it could be a boon to Fort Caspar Museum visitations. As city staff meet with FCMA members, Knell said he hopes this potential is emphasized and that a suitable spot somewhere near the museum can be agreed upon.

Napier said he liked the point Knell brought up about the role of wind energy in the area. He said staff are prepared to conduct more research into locating a spot for the sculpture if needed. He cautioned that spaces the city owns that have the infrastructure in place needed to accommodate the sculpture are few.

He said there is definitely more work that needs to be done before a final decision can be made on the wind sculpture site.