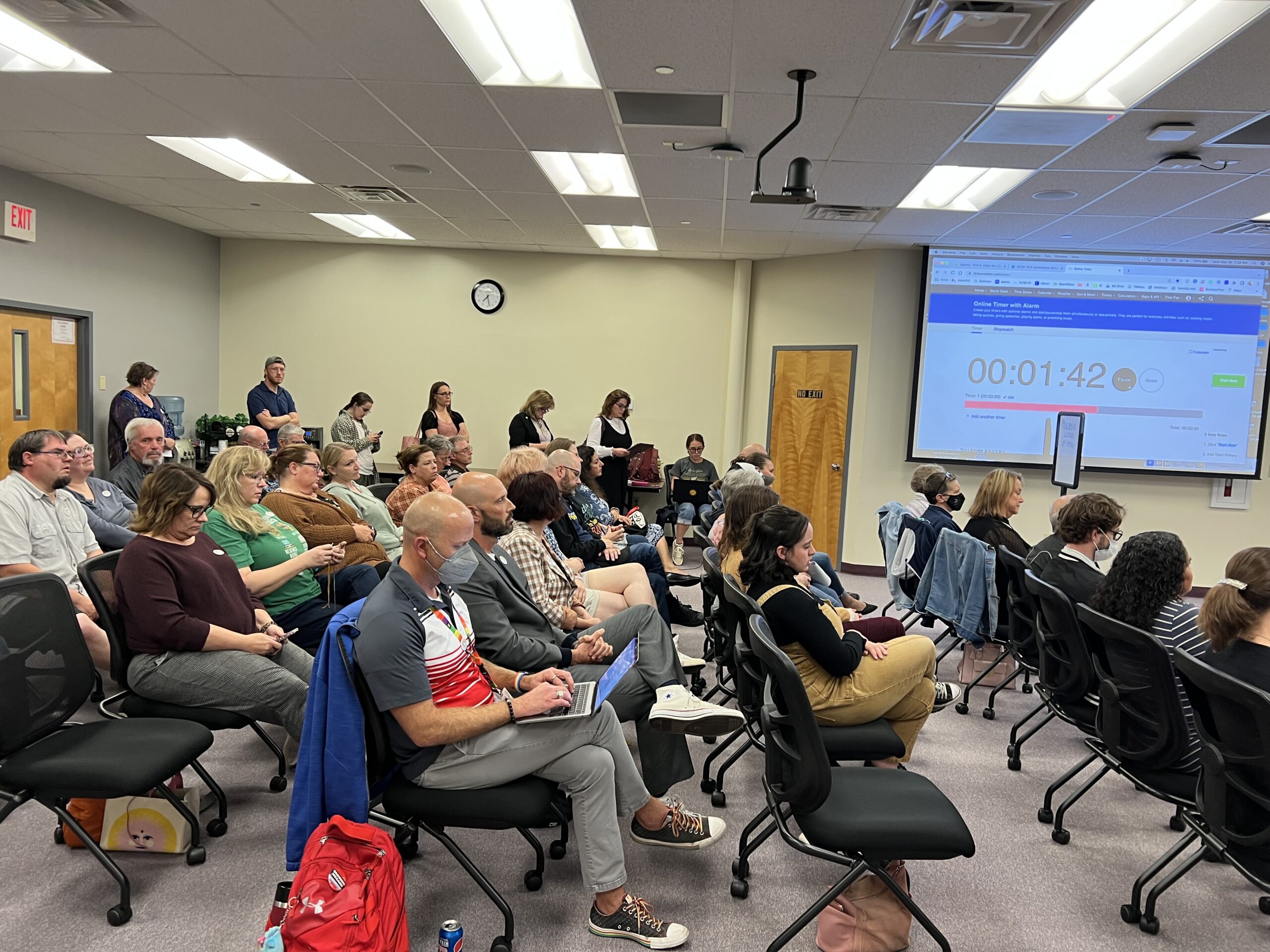 People have expressed opinions as to whether two books should be allowed to remain on high school library shelves during recent NCSD Board of Trustees meetings. (Brendan LaChance, Oil City)

CASPER, Wyo. — A Natrona County School District Reconsideration Committee tasked with considering whether two books should be allowed to remain in the Kelly Walsh High School library has decided in favor of retaining the books.

The committee’s decision regarding the books “Gender Queer” by Maia Kobabe and “Trans Bodies, Trans Selves” by Laura Erickson-Schroth is binding for the entire school district regarding the status of the books in the school district for a period of two years, per NCSD policy. However, someone could appeal the decision and the Natrona County School District Board of Trustees would then be the final review panel to decide whether the books can remain.

As of Monday morning, NCSD Director of Public Relations Tanya Southerland said she was not aware of any appeal requests having been made regarding the committee’s decision.

The school district has made the committee’s written decision available online after the report was submitted on Friday.

The Reconsideration Committee was formed according to district policy after NCSD received two requests asking that the books be reconsidered on Aug. 15. Recent school board meetings have seen people express a range of views as to whether the books should be banned from school libraries.

The committee held public and closed sessions deliberating the two books on Aug. 29 and Sept. 1 at the NCSD Central Services Facility. The public sessions included video presentation from school district librarians regarding the process of selecting books. That video came from an April 11 school board work session, according to the committee’s report.

“In regards to the specific books, the Reconsideration Committee read in entirety both ‘Gender Queer’ by Mai
Kobabe and ‘Trans Bodies, Trans Selves: A Resource for the Transgender Community’ edited by Laura
Erickson-Schroth,” the committee’s decision stated. “The committee also reviewed product details, reviews, award nominations, and awards received for each book, all criteria determined through AR 6232.

The committee voted in favor of keeping both books in the Kelly Walsh library after its deliberations on Aug. 29 and Sept. 1. The committee decided both books are appropriate for high school libraries “with the understanding that the age range of high school students varies from approximately 14–18 years of age and that parents/guardians have ‘the right to determine the reading, viewing or listening matter for his/her own children,'” the report stated. Parents and guardians are able to request that their own children not be allowed to check out specific books at school libraries per district policy.

“It is the understanding of the Reconsideration Committee that NCSD libraries have a process in which parents/guardians may ‘flag’ titles or specific content within the library check-out system that they deem inappropriate for their children,” the report said. “This process allows for parents to determine the reading material for their own children. It is the recommendation of this committee that this process be clearly communicated to parents/guardians.”

In addition to specific criteria outlined in school district policy, the committee said it “also considered legal decisions that stated books could not be removed from libraries because the deliberating group disliked or disagreed with the ideas contained in the books” and also “considered whether the books contained pervasive vulgarity and whether the books were educationally suitable, and decided in favor by a majority vote that for some high school students the books did not contain pervasive vulgarity and were educationally suitable.”

The full report and the school district policy outlining the book reconsideration process are available for review below: