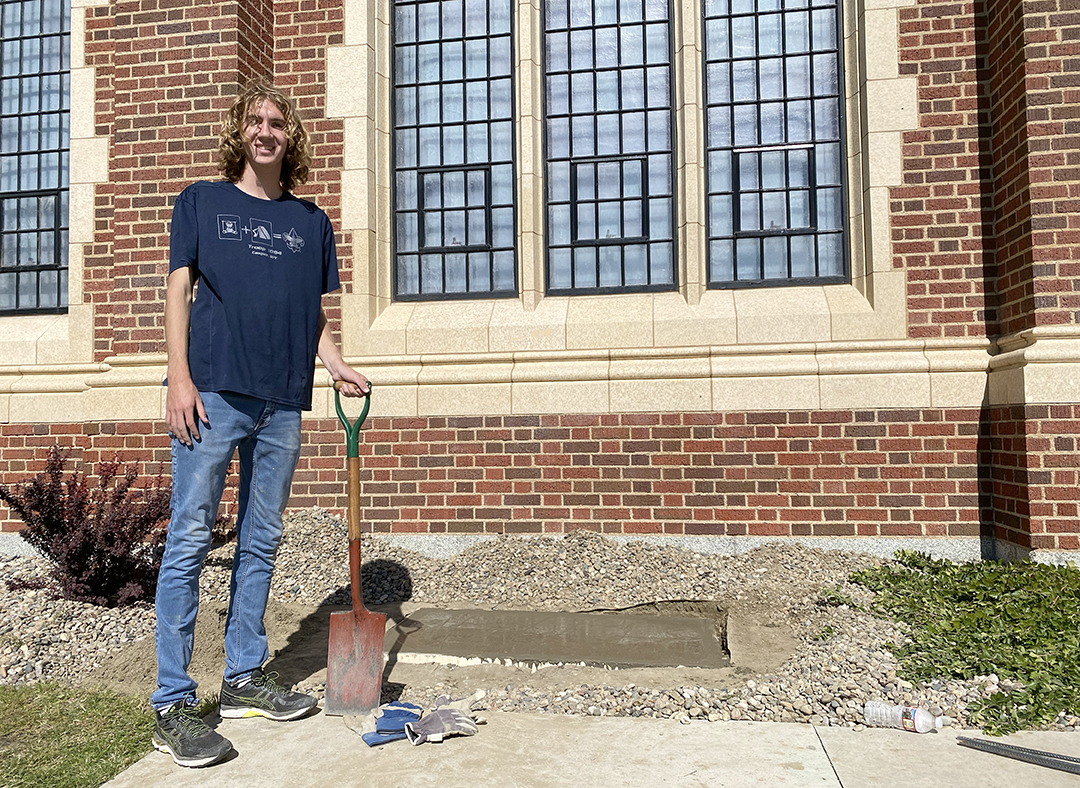 Jackson Dutcher, 17, poses next to the site where the cornerstone of the original NCHS building will be placed in a new, permanent display. The first NCHS was constructed in 1913. The current NCHS was constructed around the old building just 11-years later as Casper rapidly grew. The old building was then demolished, and the area was used as a courtyard. (Dan Cepeda, Oil City News)

CASPER, Wyo. — Casper was enjoying its first energy boom in the early 1900s, which meant an influx of families with kids who needed schoolrooms.

An assortment of small buildings filled that capacity until 1913, when the first Natrona County High School building was opened.

But the boom didn’t stop, and the handsome brick building was soon overflowing. By 1924, a new school building was constructed around the old one, which was then demolished to become a courtyard surrounded by NCHS’s walls. That was infilled in 1995 with a library addition, which has since been replaced after an extensive restoration, remodel and expansion of NCHS that was completed in 2018.

NCHS’s campus is on the National Register of Historic Landmarks. It’s easy to forget that a smaller building was ever there. However, thanks to an ambitious NCHS senior, a small piece of that history will soon be returning to its original home.

Jackson Dutcher says he discovered that the original NCHS cornerstone was hidden in plain sight in a family friend’s backyard. For decades it’s been serving as a step as part of the landscape.

“We decided that we just needed to get it back, and kind of got the ball rolling,” said Jackson. He’s leading the project as part of his work to become an Eagle Scout.

Jackson addressed the Natrona County School Board with his plan last month, telling them that he secured the transfer of ownership from the Keating family, and hoped to have the artifact displayed permanently at the NCHS campus.

Last Saturday, volunteers including Jackson and his dad, Craig, worked on building a small concrete pad located just west of the original school’s main entrance, which now serves as the entrance for performances in John F. Welsh Auditorium.

Craig thinks the concrete prep work could be completed by this coming weekend. “Once that’s set, maybe by the middle of October we can have it moved here.”

They estimate the block weighs at least 200 pounds, and believe it can be moved with straps and muscle from a number of volunteers.

Alongside the hand-chiseled block, a permanent plaque will be placed nearby featuring a photo of the original school building with its history.