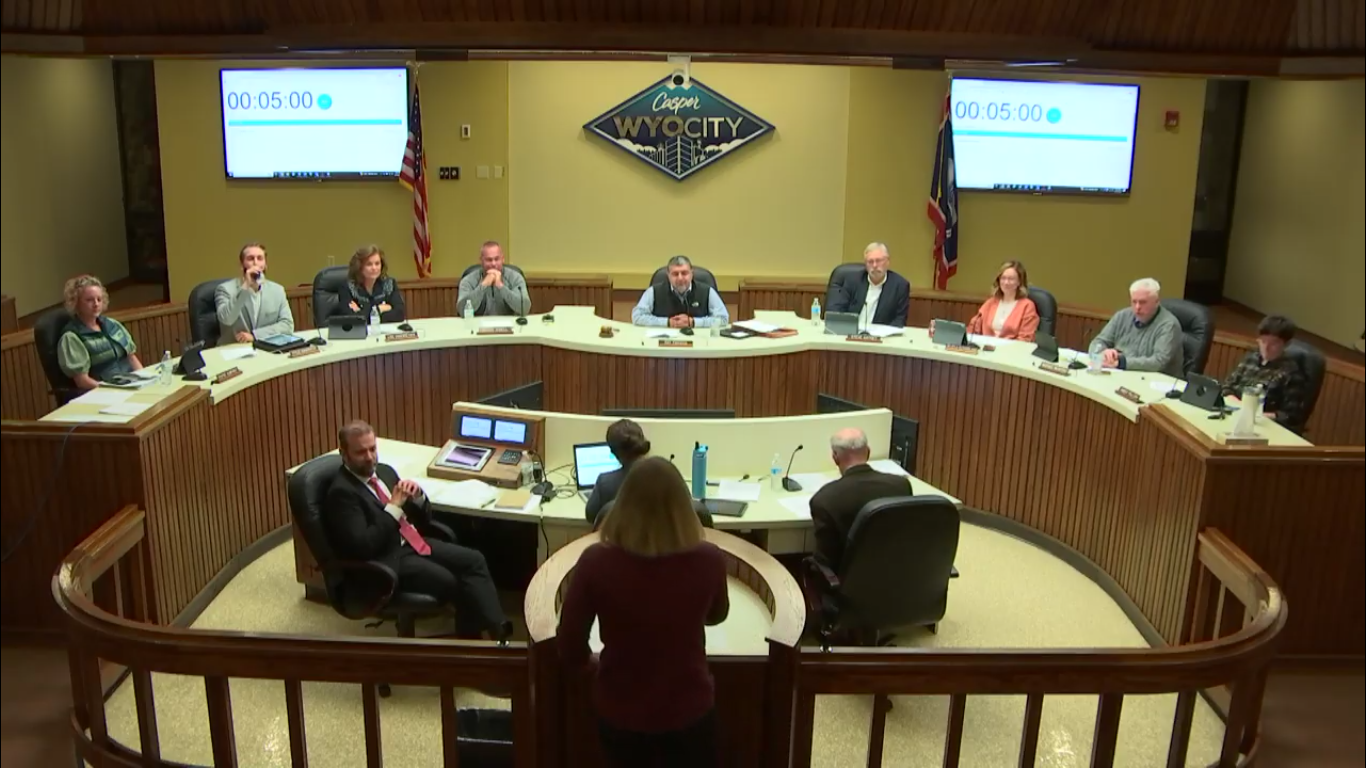 Casper residents expressed some thoughts about a proposed new anti-discrimination ordinance on Tuesday. (Screenshot via City of Casper, YouTube)

CASPER, Wyo. — On Tuesday, the Casper City Council amended the proposed new anti-discrimination ordinance, adding definitions for some terms and language to clarify that “mere speech” does not constitute a punishable act of discrimination.

After adopting the amended language, the City Council proceeded to advance the proposed new ordinance on an 8–1 second-reading vote. Councilmember Steve Cathey was the dissenting vote. Before it can become municipal law, the City Council would need to pass the proposal on one further reading.

A memo from City Attorney John Henley, along with documents showing the amendments added to the ordinance on Tuesday, is available as follows:

Ahead of the vote, the City Council heard a range of opinions from residents.

One aspect of the amendment adopted by the City Council on Tuesday specified that age as a protected class applies to people ages 50 and above rather than of any age. Before the City Council’s vote, Seth Hollier, co-owner of The Void, told the City Council he thinks youth should also be protected.

Sykler Cooper described some prejudice he has experienced being raised in Casper.

“Growing up gay in a state like Wyoming can be a very difficult feat,” Cooper said. “I’ve watched my peers enjoy relationships free of judgment, persecution or hate while partners with myself couldn’t walk down halls at schools together holding hands without being called slurs, having things thrown at us or being threatened merely for doing the same things that they were.”

Cooper added that he has participated in focus groups conducted by a research firm with other members of the LGBTQ community and said every other person in the focus groups also talked about facing discrimination. He asked people who don’t think there is a need for the ordinance to consider some scenarios.

“How would you feel if you were walking down the street, holding hands with your husband or wife and someone followed behind you yelling slurs and profanities?” Cooper asked. “Imagine if your children or yourself or someone you cared about were denied housing because their renter refuses to rent to two unrelated adults who are legally married?

“How would you feel if you were threatened physically with violence or verbal violence because you don’t fit into traditional stereotypes the society has for a specific gender or sex? Have you ever experienced harassment due to being born a woman or the color of your skin or your age or your religion?”

Kate Allen, and member of the Casper LGBTQ Advisory Council, which prompted the City Council to consider an anti-discrimination ordinance, noted that the ordinance is not specific to any group. The proposed ordinance would offer protections against discrimination based on race, color, religion, ancestry, sex, sexual orientation, gender identity, gender expression, national origin, disability and age. It would create new municipal-level protections against bias-motivated violence as well as discrimination in housing, employment and public accommodations.

Allen, who said she works as an attorney, added that she thinks the proposed ordinance would fill some gaps not always adequately covered under federal anti-discrimination laws.

She added that the ordinance could make LGBTQ people more comfortable considering a move to Casper.

“My wife and I moved here in 2018,” Allen said. “At that time one of the only things we knew about Wyoming was Matthew Shepard.”

While Casper ended up seeming better than its reputation might have suggested, Allen said the proposed ordinance would have made her and her wife more comfortable deciding to come to Casper.

“We almost didn’t move here because we were afraid of being a gay couple in a state with a very poor record on gay rights,” she said. “An ordinance like this would reduce that friction in recruiting talent, in recruiting employers and generally in making the economy a better and more inclusive economy.”

A member of the Casper Youth Council told the City Council she thought the ordinance would be a step in the right direction to signal to youth that the community offers protections against discrimination, which might remove some of the incentive that drives youth to move away.

Riley Jorgensen told the council he is transgender and often feels afraid in Casper, adding that he thinks this is common among the transgender community.

“We’re more scared of other people than you are of us,” Jorgensen said.

He told the City Council he thought the proposed ordinance would help people feel more safe going out in the community.

Keith Nachbar, an attorney and former municipal judge who expressed concerns about the ordinance ahead of the first reading, reiterated some of his concerns on Tuesday and communicated that the amendments the council was looking to add wouldn’t clear up all his concerns.

A main question Nachbar has raised is how the city plans to enforce provisions in the proposed ordinance regarding discrimination in housing, public accommodation and employment. As the ordinance attempts to deal with that discrimination as a criminal rather than civil matter, Nachbar said there will not be depositions or written discovery during court proceedings. He said that as attorneys are likely to advise their clients accused of discrimination not to give statements, that would leave the execution of search warrants as the only mechanism available to investigate alleged discrimination cases.

Nachbar added that he thinks false allegations of employment discrimination are common. The civil process followed under federal law has mechanisms to vet legitimate accusations, he added, questioning the need for a municipal law when federal protections already exist.

Terry Drake said he’s familiar with hate and bigotry in Casper but questioned whether the ordinance would achieve the goals it sets out to. Drake said he thinks there is a lack of valid evidence that enhanced hate crime penalties help advance goals of equality. Hate crime legislation might encourage people to view themselves as members of a protected group rather than as members of society, he added.

“Creating protected groups goes against what we should strive for as a community,” Drake told the City Council. “We can’t legislate morality.”

Full comments from those who spoke for and against the ordinance, as well as comments from City Council members, can be reviewed in the video recording of the meeting: