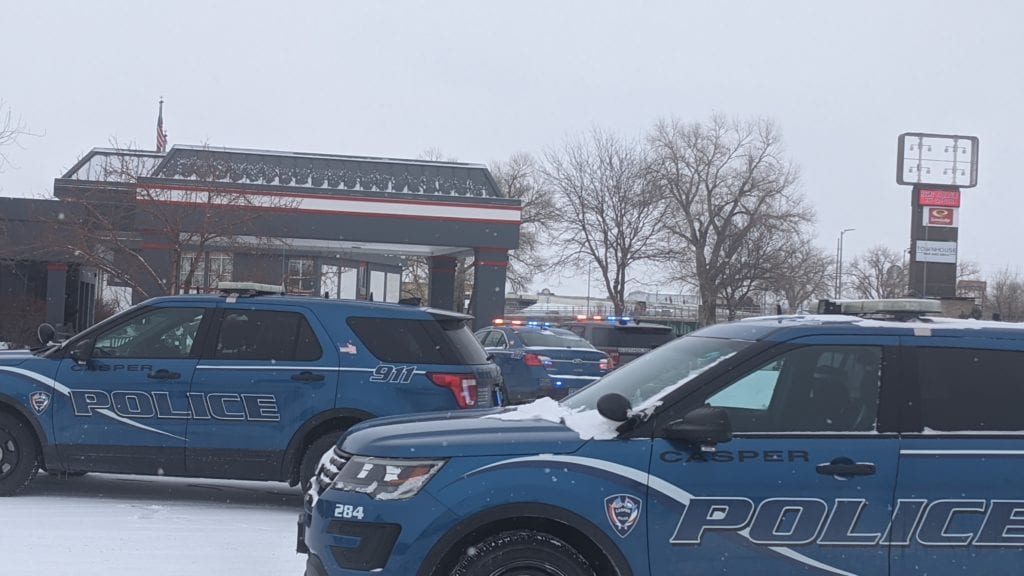 Officers respond to a call at a hotel on the 300 block of West F Street in Casper in February 2021. The call was reported to be a false alarm. (File, Oil City)

The second reading vote passed unanimously. A third reading is needed before the proposal can become local law.

The Casper Police Department has advocated for the changes due to officer time wasted responding to false alarms.

The new penalties contemplated under the proposed ordinance would apply only to alarm systems that alert dispatch. The penalties won’t apply if someone has a private home system that doesn’t alert law enforcement of an intrusion.

The proposed ordinance would establish civil fees if more than two false private alarms in a calendar year originate from a single alarm user, a memo from Casper Police Chief Keith McPheeters explains. The proposed fee schedule is as follows regarding false private intrusion alarms:

If eight or more false private intrusion alarms happen in a year, the alarm user could be placed on a “no response” list under the proposed ordinance. Officers would not respond to alarms if a user is on this list. In order to be removed from the list, the alarm user would need to pay a $25 reinstatement fee, demonstrate proactive measures implemented to prevent future false alarms in writing and receive certification from an alarm installation company that the system is properly functioning.

For panic alarms, users would only be allowed one false alarm per year before fees would kick in. The fees for false panic alarms would be as follows:

A no response list would not apply to excessive panic alarms, meaning law enforcement would still respond even if an excessive number of such instances were to occur, McPheeters noted. The proposed ordinance would require panic alarm users to rely on two-button rather than one-button systems to cut down on accidental activation, he added.

The proposed ordinance can be reviewed as follows: