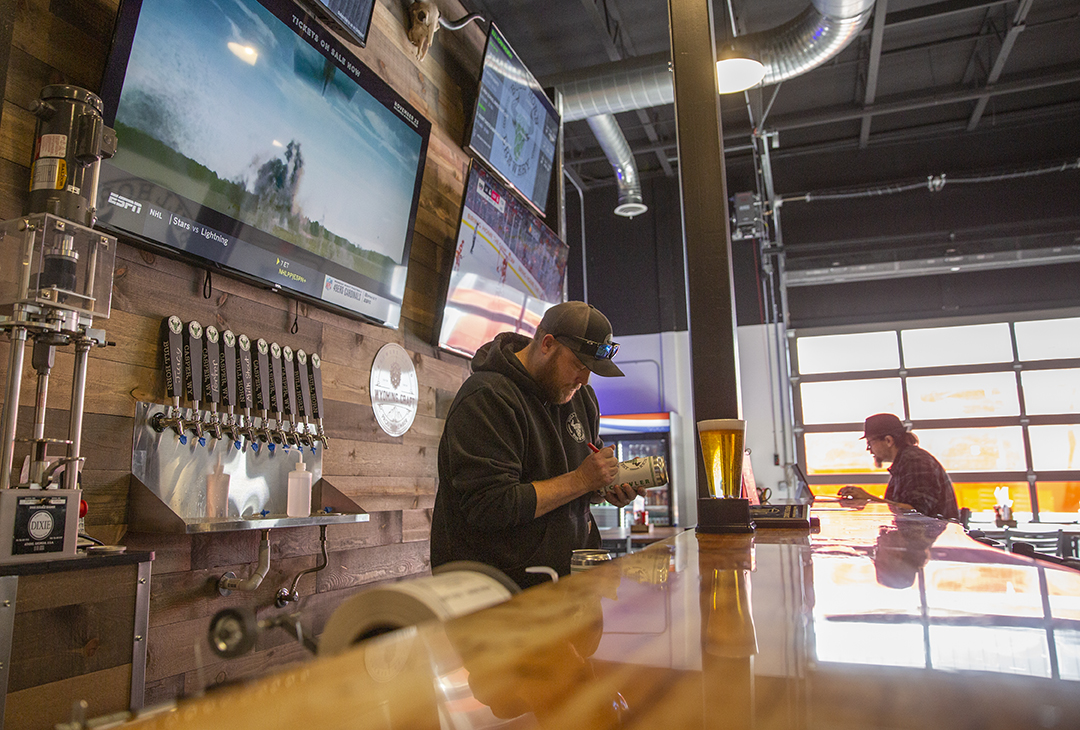 Bull Horn Brewery owner Holden Kai completes a crowler order shortly after opening for the day recently. The brewery opened for business at the start of November, and is the latest addition to Casper’s growing craft beer scene. (Dan Cepeda, Oil City News)

CASPER, Wyo. — Bull Horn Brewing owner Holden Kai hoped to have craft beer flowing from the taps by June. It didn’t quite work out that way.

“We had some efficiency issues with the brewing system, and then deliveries were rough,” he said earlier this week. “A lot of challenges.”

The summer has passed and the snow is flying, but there is also beer flowing from the taps at Casper’s newest craft brewery, which held its soft opening a couple of weeks ago and plans on a grand opening event in the near future.

The delay didn’t stop Kai from making a splash right out of the gate. Two of his craft beers won People’s Choice and Judges Choice at the recent Booze & Bacon Festival, earning recognition against stiff competition from several more established Wyoming craft breweries.

The seasonal brews, an Oktoberfest and his Count Chocula Marshmallow Milk Stout, are already gone for the season. He’s now brewing up some new seasonals along with a rotating selection of regulars in the comfortable brewing station he’s built.

Kai also benefited from the longer-than-expected launch time to create a food truck concept in front of the brewery.

Orvile Greenwood was working as a sous chef at Keg & Cork when Kai approached him about helping design an elevated brewpub menu. “I pitched it to him and we came up with some recipes together, and he mastered it,” said Kai. The truck is called By The Horn Gourmet Eats, and will mostly remain parked at the brewery, but they have the option of taking it out to festivals or other big events.

“We could’ve built a kitchen in here, but I was like, ‘Hey, let’s do a food truck and make the food a little more dressed up,'” said Kai. “Breweries are associated with food trucks, so we kept that idea.”

Two golf simulators were also installed at the back of the brewery, utilizing a state-of-the-art moving floor to add real touches.

The brewery takes on something of a cozy sports bar feel, with multiple screens showing games.

When summer finally returns, garage doors facing the alley and food truck will open, and eventually a stage will be built for outdoor music, said Kai.