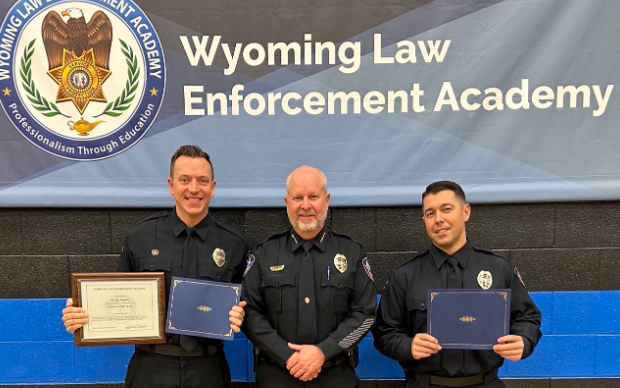 Those recruits are Zack Gonzales and Matt Moore. Gonzales was awarded for “Top Physical Fitness” among the graduating class of the Wyoming Law Enforcement Academy.

After completing the Wyoming Law Enforcement Academy training, Gonzales and Moore will receive further training from the Casper PD. The “Post Academy Training” will include about four weeks of classroom training on City of Casper ordinances, use of the dispatch system, report writing, interaction with other agencies, geography and more, the Casper PD said.

Gonzales and Moore would then become patrol training officers and would get 16 weeks of “one-on-one intensive on-the-job instruction,” the department said.

Prior to the Wyoming Law Enforcement Academy training, candidates undergo a background investigation that can take up to 16 weeks, the Casper PD noted.

“The background process consists of interviewing several people you have interacted with during your life, both professionally and personally,” the department said. “Physical fitness exams, mental health screenings, polygraph, drug screening, and others, just to name a few.

“Once selected as a recruit, the officers are then sent to the Wyoming Law Enforcement Academy. There, they learn constitutional and Wyoming Law, custody and control, firearms, emergency vehicle operations, basic investigation skills, and are given several opportunities to develop as leaders in #ourcommunity.”

In total, the process to become an officer takes 51 weeks.

The Casper PD said its next testing process will start on Jan. 23.