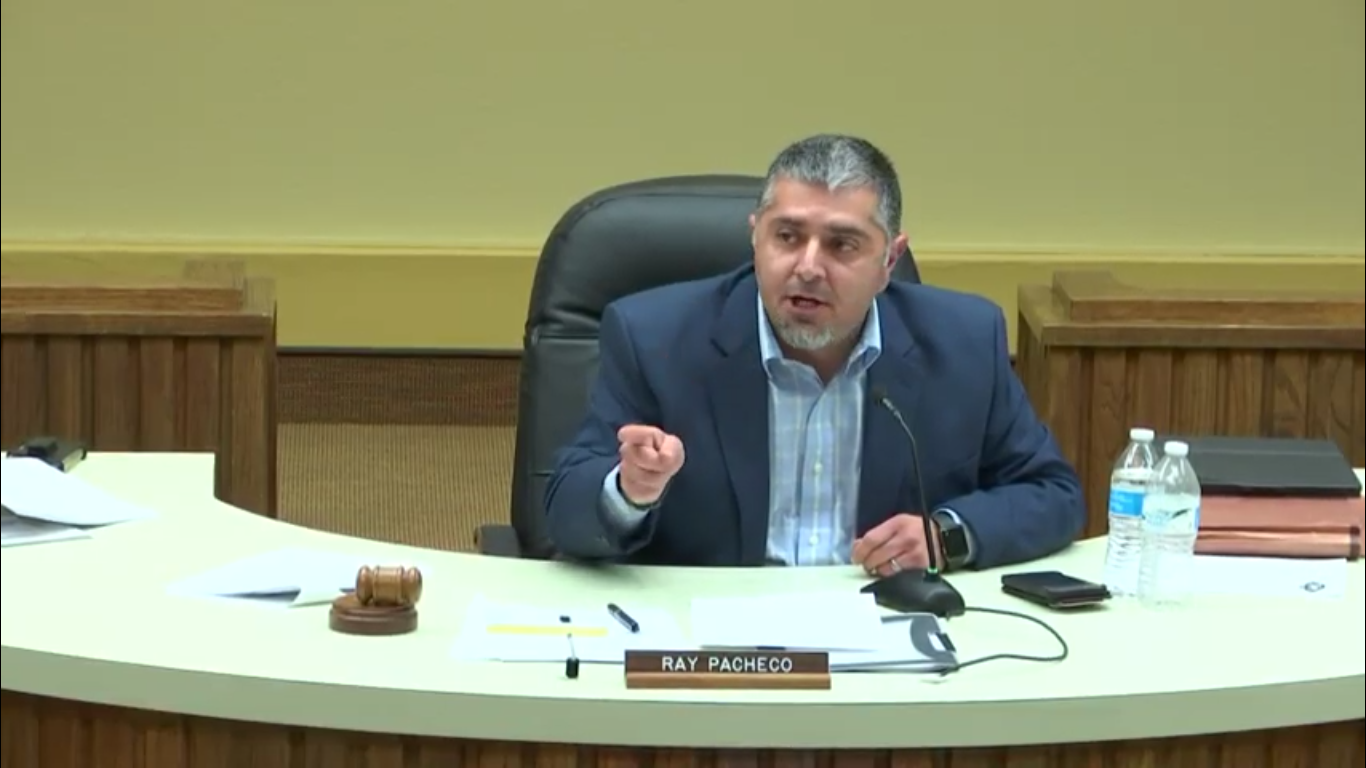 Mayor Ray Pacheco said the new anti-discrimination ordinance expresses that Casper is a place where all people should be welcome. (Screenshot via City of Casper, YouTube)

CASPER, Wyo. —The City of Casper is officially adding protections against discrimination into the Municipal Code after the Casper City Council passed a new ordinance on third and final reading on Tuesday, Dec. 6.

“We believe that in our community, hatred has no place and will not be tolerated,” Casper Mayor Ray Pacheco said ahead of the vote. “We believe that in Casper, all people are welcome and that we celebrate everybody from all walks of life.”

When Bill Allemand, representative-elect to Wyoming House District 58, came to address the City Council during the meeting Tuesday, Vice Mayor Bruce Knell challenged him to help the ”Equality State” join the 48 other states that have state-level protections against hate crimes.

“You’re going to be representing us on a state level … and Wyoming is one of two states in the entire country without an anti-discrimination ordinance,” Knell said, reminding Allemand that younger people who spoke earlier in the meeting talked about their experiences dealing with discrimination growing up in the state. “You heard from the mouth of these kids, they are being assaulted, they are being discriminated against because of their sexual orientation or their religious beliefs or whatever it is.

“So I’m going to challenge you as a state lawmaker to get something on the books and to get up with the rest of this country.”

Prior to the third reading vote, Councilmember Amber Pollock called for an amendment to remove age from the list of protected characteristics. The City Council had added age to the list on a first-reading amendment after a person had pointed out that the draft ordinance didn’t offer protections against age-based discrimination. After a second reading amendment was added specifying that age protections would only apply to people ages 50 and above, however, the City Council heard some calls for the ordinance to protect youth from discrimination as well.

Pollock’s amendment asked that age be removed entirely, putting the ordinance back closer to the version considered on first reading so as not to scuttle the long work that went into it. That first reading draft was put together over an 18-month process that involved extensive research from the city attorney’s office, Pollock noted. The City Council will have opportunities to work on the age issue at a later date, she added. Pollock’s amendment passed unanimously.

The ordinance includes language clearly stating that the penalties it creates do not apply to “mere speech.” It also outlines that evidence of discrimination must be demonstrated beyond a reasonable doubt, defining burden of proof as follows:

Burden of proof. Investigations of alleged violations of this code are undertaken based upon a strong showing of reasonable suspicion that the violation occurred because the alleged perpetrator’s actions were based on one or more protected characteristics of the victim(s). Reasonable suspicion is best demonstrated by expressions of bias, hate or prejudice, made or encouraged by the perpetrator at or near the time of the alleged violation, or, through a sustained pattern of conduct which demonstrates the perpetrator’s motivation. Violations of this code section, must be proved beyond a reasonable doubt.

After Knell challenged Allemand to get a state-level anti-discrimination bill passed, Rep. Pat Sweeney, who lost to Allemand in the Republican Primary, praised the City Council for its work on the ordinance. Someone in the audience interrupted while Sweeney was speaking. Sweeney indicated during his comments that the crowd on Tuesday included some who have attended “Liberty’s Place 4 U” debates, saying that he has attended himself.

“I’ve been to some of these meetings and been booed down,” he said. “Don’t go to a meeting with that group with an opposing view. They don’t want to hear it. … It is not debatable in their minds.”

While Councilmember Steve Cathey voted against the anti-discrimination ordinance, he said some of the disruptive behavior from some in the crowd during the meeting was disappointing.

“I am sorely disappointed in some of the people that were in this room this evening,” he said. “I sat here for two and a half to three hours and listened to every comment that was made. I did not go up and get a snack. I did not do anything. I would have thought they would have owed the nine of us sitting up here the respect to listen to our side of the issue.

“That did not happen. That sorely hurts me.”

Cathey said his opposition to the ordinance stems from his view that respect for others cannot be legislated and that he thinks the ordinance may serve to divide people. He said he thinks all Americans deserve respect.

Sweeney said he hopes the state does follow the lead of Casper and other Wyoming communities that have adopted anti-discrimination laws.

“Let the light shine because this is a bright day, in my opinion,” he said.

“The Equality State to me means equal rights for everyone, not just for the good ol’ boys,” he said.

When Knell mentioned that Wyoming is often known as the state where the brutal murder of Matthew Shepard took place, he said it makes him sick.

“You don’t need to interrupt me,” Knell said, as someone from the crowd again ignored basic civil discourse courtesies asking people to speak one at a time without interrupting others.

While some opposed to the ordinance argued that it wouldn’t stop any discrimination, Pollock argued that that is not the only point of ordinances.

“Ordinances are not necessarily meant to stop behavior,” she said. “They are meant to provide recourse to victims in the event that something does happen.

Full comments from City Council members and people who spoke on Tuesday can be reviewed in the video recording of the meeting on the City of Casper’s YouTube channel:

The following memo from city staff includes some explanation as well as the language of the ordinance prior to the amendment removing age that was adopted on Tuesday: