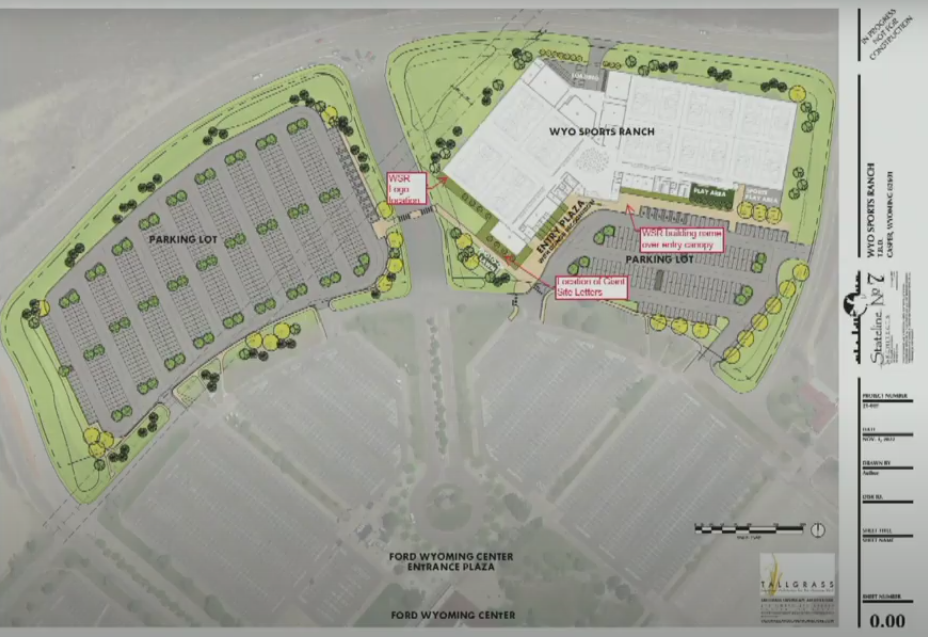 A map showing the WYO Sports Ranch that is expected to be built near the Casper Events Center. (Screenshot via City of Casper, YouTube)

CASPER, Wyo. — On Tuesday, the Casper City Council discussed a proposed change to Park Historic zoning rules that was prompted by the 133,000-square-foot WYO Sports Ranch that will be built near the Casper Events Center.

The WYO Sports Ranch is an indoor sports facility that is expected to be funded and built by the nonprofit organization WYO Complex on City of Casper–owned land near the Casper Events Center. While the City Council previously approved a lease agreement to allow the development to move forward, Community Development Director Liz Becher explained Tuesday that there is a hiccup relating to minimum front-yard setback requirements in Park Historic zoning districts.

While Park Historic zoning rules currently require a minimum front-yard setback of 30 feet, the recently approved platting of the Events Center property as part of the North Platte River Park No. 2 Subdivision has caused the newly established Events Drive right-of-way to encroach 15 feet into the area where the WYO Sports Ranch complex is to be built. As a result, it has been difficult to meet the 30-foot setback requirement.

City staff are therefore proposing a change to Park Historic zoning rules that would reduce the setback requirement from 30 feet to 15 feet. While this proposal is prompted by the WYO Sports Ranch situation, the rule change would apply to all areas zoned as Park Historic. The Casper Planning and Zoning Commission has formally recommended the City Council adopt the change.

The City Council indicated its support for the proposal after some discussion during the work session on Tuesday.

After discussing the setback proposal, Becher added that a small modification is needed for the lease agreement with WYO Complex for the complex to correct some minor platting issues relating to property lines in the lease agreement. She said this issue will be explained further in a memo when it comes up for formal consideration by the City Council.

The sports complex, which could open as soon as summer 2024, will be located north of the Ford Wyoming Center and will offer a variety of sports courts and facilities, including basketball, volleyball, and multi-use turf as well as a sports performance and training area.

A memo explaining the setback issue is available below: