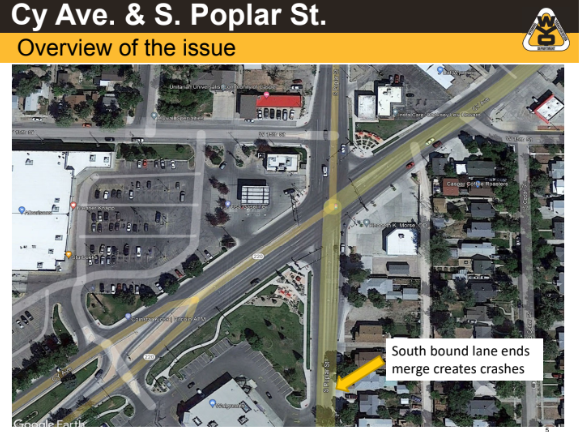 The state traffic engineer talked to the Casper City Council about crash data at the CY and Poplar intersection on Tuesday. (Screenshot from WYDOT powerpoint presentation)

CASPER, Wyo. — On Tuesday, the Casper City Council heard a presentation from Wyoming Department of Transportation staff about safety at the intersection of CY Avenue and Poplar Street. CY Avenue is part of Wyoming Highway 220 and is therefore part of WYDOT’s jurisdiction.

Over the past six years, the intersection has seen a total of 104 crashes, eight of which resulted in injury, State Traffic Engineer Joel Meena told the City Council during the work session at Casper City Hall.

The total number of crashes at CY and Poplar is more than at comparable intersections in Casper, though Meena noted that there have been no fatalities reported among the crashes at that intersection in the past six years. WYDOT reviewed those six years of data after Casper Mayor Bruce Knell reached out to the agency a few months ago expressing concerns about the intersection.

The fact that CY and Poplar is a skewed intersection where the streets don’t cross at a 90-degree angle is likely a major factor in the number of crashes seen at the intersection, Meena told the City Council.

WYDOT conducted a significant reconstruction effort at CY and Poplar in 2015, according to a memo from city staff. The agency is planning some further steps in hopes to further reduce crashes, Meena said Tuesday.

Possibilities include adding striping, particularly “skip dash” striping to demarcate dual left lanes at the intersection. The signals along the Wyoming Highway 220 corridor will also be recounted and retimed in summer 2023.

Meena added that something the city could consider is extending the southbound outside through lane to give people more time to merge when Poplar narrows to become a single lane heading toward Casper Mountain.

Knell asked whether removing the right southbound lane coming on Poplar in front of Walgreens might help alleviate the problems at the intersection.

With the intersection seeing an average of 20,000–26,000 vehicles per day, Meena said removing lanes would not be something he would recommend. Extending the second southbound lane on Poplar to give people more time to merge would be more effective, he added.

Meena also noted that WYDOT has some staffing limitations to consider and that the agency tends to primarily focus on high-speed corridors, noting that keeping people safe when traveling at 75–80 mph is no easy task.

After some discussion, the City Council asked city staff to study the possibility of extending the right southbound lane along Poplar near the intersection to give more time for people to merge.

The city staff memo and Meena’s PowerPoint can be reviewed below:

The work session discussion can be reviewed on the city’s YouTube channel: