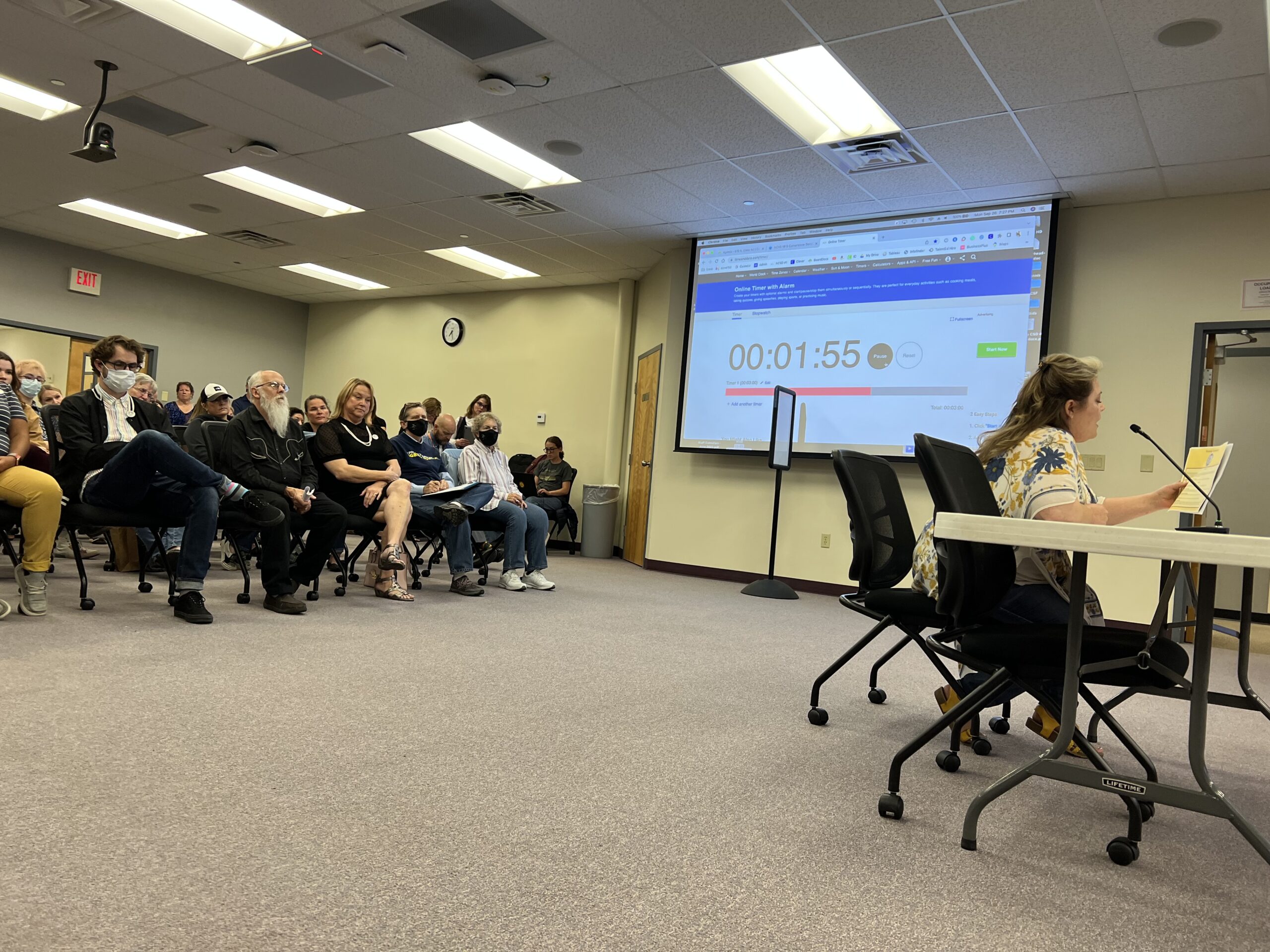 People spoke at the Natrona County School District Board of Trustees meeting on Monday, most urging the school board against the banning of two books. (Brendan LaChance, Oil City)

CASPER, Wyo. — The localized version of a nationwide book banning debate is drawing near to a decision for the fate of two books in the Natrona County School District.

Since fall 2021, the NCSD school board has repeatedly heard comments for and against banning a variety of books geared toward the LGBTQ community, but after formal complaints were filed against “Gender Queer” by Maia Kobabe and “Trans Bodies, Trans Selves” by Laura Erickson-Schroth, the future of those two books is being determined according to NCSD Administrative Regulation 6132.

A committee formed according to the school district procedure is expected to provide its written decision regarding whether or not the books should be removed from school library shelves to NCSD Associate Superintendent Walt Wilcox on Friday. Once the written decision has been reviewed, it will be made available to the public.

While a written decision from the committee — comprised of two school principals, two classroom teachers, two laypersons “with expertise in the field” and a chair — has yet to be delivered, the committee communicated a verbal decision earlier in September that would allow the two books to remain on school library shelves.

On Monday, a range of people came to the NCSD Board of Trustees meeting to speak about the book banning issue. With the big crowd, NCSD opened up an overflow room, where it streamed the meeting for attendees who couldn’t find a seat in the room where the Board of Trustees was sitting.

The so-called “Moms for Liberty” group, which includes three people running for the NCSD Board of Trustees, has been vocal in the book banning debates, urging the school board to remove what they see as material inappropriate for students from school libraries.

Renea Redding, a school board candidate with Moms for Liberty, said Monday the group is not calling for a ban on LGBTQ books in general. Rather, she said the objections are to books with sexual imagery or sexually provocative language.

Redding read aloud a page from “Gender Queer” that includes language about oral sex. Debate at school board meetings spills over into online spaces, and some people opposed to allowing “Gender Queer” to remain in school libraries have themselves posted images from the graphic novel they consider pornographic in comment threads responding to stories about the book banning debate from local media outlets.

Zach Schneider, a teacher at Natrona County High School, spoke after Redding highlighted what she saw as a particularly explicit passage from “Gender Queer.” Schneider suggested that cherry-picking passages from the book is a tactic that aims to make listeners feel “icky” about the sexuality of LGBTQ people.

He urged the school board not to be swayed by language he thinks mischaracterizes what books like “Gender Queer” are trying to achieve.

Kobabe, author of the graphic novel “Gender Queer,” talked about reasons for writing the book in an April interview with NPR station KBIA.

“[A] lot of why I wanted to write the book was actually to help me come out,” Kobabe said. “Writing it was a process of examining my own identity and figuring out how to articulate — in like the clearest, most concise form — what I was trying to say, when I was talking about gender.

“And a way to get across — specifically to my own parents, and aunts and uncles — what I meant when I was talking about gender, and why nonbinary pronouns are so important to me.”

Schneider told the school board he thinks it is crucial that LGBTQ youth know they have adults who support them.

“As long as I draw breath, I will support any student no matter how they identify themselves,” he said.

An NCHS senior told the school board on Monday they have been forced to stay home from school due to receiving death threats for how they identify. The student urged the school board not to ban the books, saying that banning the books could lead down a path of more book banning.

Retired English teacher Lisa Gray talked about how definitions of what constitutes pornography can be different for different people.

In addition to teachers and students, health and mental health professionals urged the school board against banning the books during Monday’s meeting.

Charlie Powell, a psychologist and former Casper mayor, said he has worked with transgender adults and got to know some things about their struggles and backgrounds.

“They weren’t political activists,” Powell said. “They believed to their very core they were simply born into the wrong body.

“It is a very hard life. It is not a life anyone would choose.”

The adults he worked with often expressed a wish that someone could have simply told them there were others similar to them, Powell said. He urged the school board to trust the decision of the committee and leave the books in schools.

Dr. Caroline Kersch, a family medicine practitioner, said that affirmation in social situations has been shown to reduce suicidality. If making books available on school library shelves gives any student a sense of affirmation and decreases the risk for suicide, Kersch said she thinks that is reason enough not to ban the books.

“I know that you all are here because you have children’s best interests at heart, and I think keeping them alive needs to be our top priority,” she said.

Christy Jindrick-Tholl, a counselor who said she is certified as a trauma therapist and is in Eye Movement Desensitization and Reprocessing therapy, said one of the ways she is able to help people is simply to let them know they aren’t alone.

Jindrick-Tholl added that a well-established addiction treatment works on the principle that disclosing secrets can help.

“You are only as sick as your secrets,” she said.

Jindrick-Tholl said when she helps people, they sometimes think she practiced some kind of magic. While literal magic is not what she offers, she said she thinks some of the “magic” that understanding and disclosing of secrets can offer is needed in the community and in school libraries.

Archie Pettry, who works as a counselor, said he highly doubts images in “Gender Queer” would be the first sexual imagery students have been exposed to in their lives.

“I doubt any of these books will harm any children, but they could help hundreds,” Pettry said.

Kristina Pham, who teaches psychology at Casper College, said she also conducts research on how to make education environments for LGBTQ+ students better. She said such students tend to graduate high school at lower rates, matriculate to college at lower rates and experience more anxiety, depression and suicidality.

Having representation and being acknowledged in schools can help, and Pham said she tries to make this clear to every student she teaches.

“In my classroom, I make it clear I am accepting of everyone,” she said.

Pham said she thinks it is important to keep the books available in the school district as a way to help LGBTQ+ students know they are represented.

A Kelly Walsh High School student told the school board that banning books would be an “overt overuse of power” and banning materials could hamper teachers’ ability to teach students critical thinking skills. Access to books like “Gender Queer” and “Trans Bodies, Trans Selves” can help people gain an understanding of “struggles people go through every day.”

“If we ban these, we are getting rid of the representation,” the KW student said.

Lisa Scroggins, director of the Natrona County Public Library, urged the school board to look at the book banning issue through the lens of free speech.

School library staff follow established procedures when selecting materials for libraries, Scroggins said, adding that she thinks libraries should strive to provide materials for all different types of people.

“Allowing any one group to limit what is available to another group sets a dangerous precedent,” Scroggins added.

Dan Rea, who introduced himself as a resident of the community, told the school board he found a digital copy of “Gender Queer” online and read it. While he found one image in the book “disturbing,” he said overall he thought it was a good resource.

Nearly 30 people spoke to the school board regarding the book banning issue on Monday. The recording of the meeting can be reviewed via the NCSD YouTube channel:

NOTE: A previous version of this story said retired English teacher Lisa Gray talked about seeing Michelangelo’s statue of “David” in school library books. However, Gray said “David” was the first male nude she saw and that some people consider that pornography. It was a different speaker on Monday night who made a point about nude images in art books found in school libraries. This story has been updated.