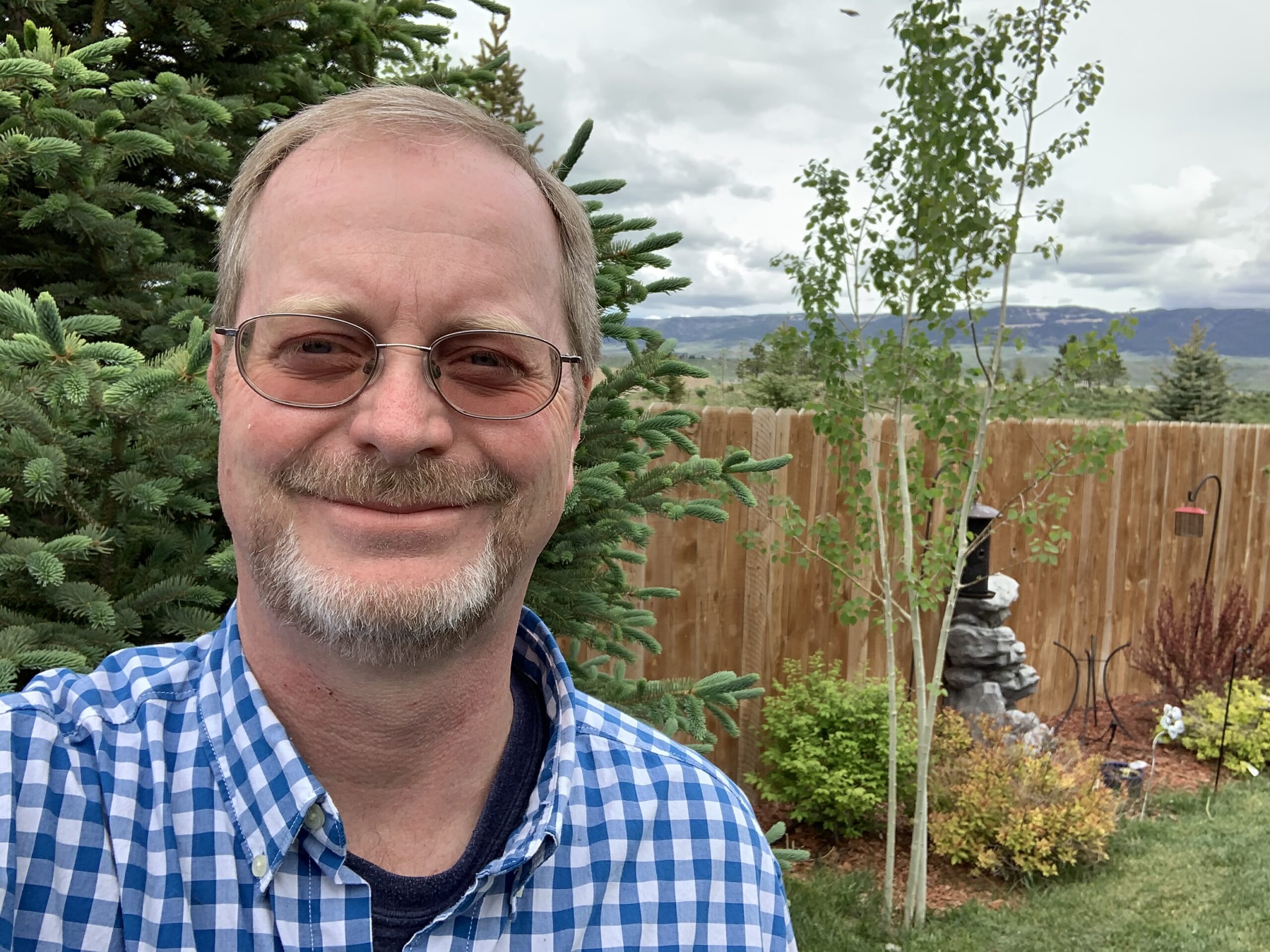 John Gudger is running for the House District 59 seat in the Wyoming Legislature. (Courtesy John Gudger)

CASPER, Wyo. — Election season is underway and Oil City News has sent a list of questions to candidates for the Wyoming Legislature out of Natrona County who have filed to run in the primary election in August.

These questions are designed to give our readers a better understanding of the people behind the names on the ballot. Below, get to know John Gudger, who is running for the House District 59 seat in the Wyoming Legislature:

My name is John Gudger. I was born and raised in east Texas. After graduating from Texas A&M University, I moved to the Rocky Mountains because I enjoy outdoor activities such as hiking and camping. Between my residency and work experience in Colorado and Washington State, Texas and return to Colorado, I completed my Master of Architecture from the University of Texas at Arlington. Professionally, I have been working in the architecture/design field for over 30 years.

While in Colorado, I met my wife, Darcie Yetter. We married in March 1998 and lived in the Denver Metro area for 20 years. During that time, we partnered with a crisis pregnancy center to adopt our son Kyle, who was born in March 2006. Kyle attends Natrona County High School.

In 2015, I joined MOA Architecture of Wyoming and moved to Casper in May 2015 to begin a new start as a Wyoming resident. Currently, I am pursuing independent business ownership.

When the sitting governor shut down the supposedly red state of Wyoming during COVID, I found myself questioning how anyone identifying as a Republican could violate the state and federal constitutions. The results have been, and still are, devastating. Looking deeper at a local level, I discovered the county GOP and my state representative for House District 59 did not represent me or the Republican Party Platform. These so-called Republican precinct committee people and state representatives are responsible for stifling our freedoms and growing the government. When I found out the representative for my house district was running for reelection unopposed, I knew I had to run. Sitting around stewing wasn’t going to fix anything.

As Representative for HD 59, I aim to reduce the size of government. That means reducing taxation and spending. My opponent voted multiple times to raise taxes — including property taxes — as well as increase spending. As a representative, I will work with the other conservatives to reverse course. When I walk my district, I find most constituents are upset by increased property taxes. My opponent contributed to the pain of the taxpayers by voting against House Bill 146, which would have protected property owners from excessive increases in property tax. He voted for House Bill 96 to increase the salaries of government officials by 33%–36%, which is funded by the struggling taxpayer.

It’s apparent we have a weak legislature unwilling to stand up against overreach by the federal government. Such overreach has strings attached which impedes our rights and freedoms given by state and federal constitutions. One example is that my opponent voted against House Bill 127, which would have limited governmental emergency powers during the COVID-19 pandemic. The federal and state government do not have the constitutional authority to pick and choose who can stay in business and who must close during a pandemic or crisis. The legislature also failed to protect people from unconstitutional mandates put forth by employers. Hundreds of constituents in my district lost their jobs. In short, the state house is NOT representing the will of the people, let alone looking out for their best interests.

To reduce the size of the government, we need to stop unnecessary spending. This requires state government and local municipalities to live within their means as the typical Wyoming family must.

Property taxes increase due to overinflated market values of property as interpreted by the State Board of Equalization. This board is UNELECTED. They do not represent the citizens of Wyoming. Legislation needs to be passed taking power of taxation away from the Board of Equalization. We need to base property taxes on acquisition value with a low percentage cap to protect property owners. Assessment and taxation would then be carried out by ELECTED local assessors. The voters can hold these elected officials accountable to following the proper protocol.

Finally, we need to assure the citizens of Wyoming that unconstitutional shutdowns and mandates will never happen again. That means passing legislation to reinforce our state and federal constitution providing citizens with a course of action should officials violate these rights. Citizens deserve standing and due process. Also, an avenue to recall officials who put such unconstitutional mandates in effect should be put in place to protect citizens, businesses, and educational institutions.

I have over 30 years working in the construction and architecture industry that required oversight and monitoring of budgets, including state-level projects. I managed projects large and small. I believe the skills from my professional work experience will transfer well to the state legislature.

We all work hard for our money. Over the past few decades, the government takes more and more. There are taxes on taxes. People are forced to work multiple jobs to make ends meet. Many are unable to invest and save for the future. To provide relief to the Wyoming citizen, we as legislators need to Reduce Government Now. It’s hypocritical of the government to expect its citizenry to be frugal while it takes and spends the people’s hard-earned money with little accountability. Larger government diminishes the citizen on many levels. The government is not the answer to the ills of society. We need to look at fiscally responsible free-market solutions. Increased spending in a high-inflation economy further cripples and destroys the taxpayer. This must be addressed. If Wyoming families must live under a budget without an increase in wages, so must the government in our state and local communities. In short, I intend to help the State of Wyoming live within its means.

For voters to be properly informed, transparency is essential. I believe the current system is daunting and keeps voters in the dark. Bills are not written in a clear, concise language which leads to misinterpretation and confusion. Representatives need to make themselves available and approachable. More about this in question seven.

7. Do you believe the office or board position you seek has been open and honest with the public? If yes, how can the entity remain open and transparent when conducting public business moving forward. If no, what changes would you implement to ensure that all future dealings are open and transparent?

I do not believe the incumbent has been open and honest with the public. When one claims to be a Republican or conservative, the voting record must align with the Wyoming Republican Platform or conservative values. If you have not read the Republican Party Platform updated in 2020, you should read it. If you need a copy, email our campaign at gudgerwyodistrict59@gmail.com and we will email it to you. On top of that, how one votes must be public. There were times during the last session as well as the special session where representatives did not want to participate in roll call. Roll call MUST be taken and all votes must be recorded so citizens can monitor whether or not they are being represented.

I believe representatives should avail themselves to public events providing means of contact for their constituents to voice concerns. I believe I am open and approachable. Should I fail to live up to my claims, I hope the voters respond accordingly and hold me accountable. I work for THEM.

8. If you were presiding over a meeting and a topic was being discussed that you didn’t fully understand, would you ask for a more detailed explanation during the meeting or would you seek the information after the meeting?

Clarification and factuality are essential for proper decision-making. There is no shame in needing to do research to further understanding. I would ask during the meeting, or at least make it known that I need further clarification/information. If the information is not provided during a meeting, I would promptly look into the matter and refrain from making a decision until I have facts and clarity.

9. Should you be elected, or reelected, do you plan on seeking any major policy changes in your chosen office? If yes, what would those changes be? If no, why not?

See my response on accomplishing goals.

Representatives in the House and the Senate are obligated to represent the will of the people in their districts. This has not been happening. I encourage voters to research candidates to make sure they are truly representing party and personal values.

Public lands are a huge Wyoming issue. Currently, the federal government owns nearly 50% of Wyoming. The revenues generated from those lands go to the feds, not the state. I have been told by a sitting legislator that we have lost tens of millions of dollars in state revenue because of federal restrictions on public lands. If we don’t stop this and take back state sovereignty over public lands while also working with the hunting and fishing industry, we will continue to see our taxes increase. The federal government should be restricted to land for National Parks and National Forests. Even then, the state should be a partner in managing these lands.

NOTE: All primary candidates who filed to run for a seat in the Wyoming Legislature were sent questionnaires at the same time and Oil City News will publish responses in the order they are received. Candidate responses are only edited for clarity and style.