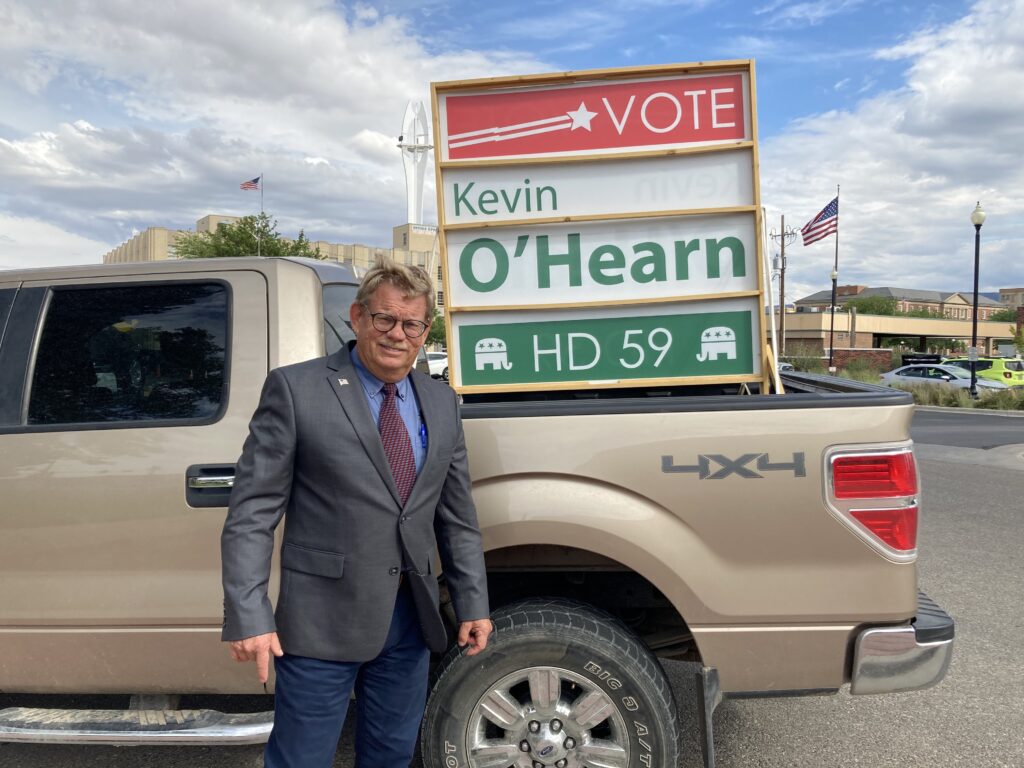 Kevin O’Hearn is running for re-election to the House District 59 seat in the Wyoming Legislature. (Gregory Hirst)

CASPER, Wyo. — Election season is underway and Oil City News has sent a list of questions to candidates for the Wyoming Legislature out of Natrona County who have filed to run in the primary election in August.

These questions are designed to give our readers a better understanding of the people behind the names on the ballot. Below, get to know Kevin O’Hearn, who is running for reelection to the House District 59 seat in the Wyoming Legislature:

Kevin O’Hearn, resident of Mills and Casper, Wyoming, since 1964, excluding my time in the Army National Guard and two deployments to Iraq and Kuwait in support of Operation Iraqi Freedom. I’m married and have worked for the City of Mills as their Building Official since 2012. I enjoy golfing, yardwork, hiking, camping, tennis, racquetball and playing cribbage with family and friends.

I didn’t like the direction it seemed the state and the country was heading: crime, immigration, abortion, civil distrust, and the general respect for the Constitution and rule of law for all citizens. Bring some common sense and respect for law and order back to society.

By participating in an open and honest debate of every piece of legislation that comes up and discuss all courses of action on every bill that exists that our state citizens object to as an infringement on the rights, within the Bill of Rights.

31 years in the military at every level from E-1 to LTC. Married for 37 years to the same beautiful, forgiving wife. Father of six kids, all being productive and employed tax-paying citizens — five presently living within HD 59. And a general contractor and small business owner of 40 years with a college BA degree.

I pay all my bills on time and I expect the state and the country to live within a budget just like every citizen in the U.S. of A. should do.

Every dollar and every expense needs to be tracked and spent efficiently and all public records should be made available before those public dollars are paid out to those that worked for it.

7. How have you made your office or board more transparent and open with the public?

I have had an open door policy whether at the office or at home or while traveling around and walking the streets. I tried to answer every question addressed to me, and I met everyone that directed a message to me while on the house floor and spoke with all those that requested my time coming and going to the floor and attended most of the open forums while in session.

8. If you are presiding over a meeting and a topic was being discussed that you didn’t fully understand, would you ask for a more detailed explanation during the meeting or would you seek the information after the meeting?

I would ask during the meeting for further explanation.

9. Should you be elected, or re-elected, do you plan on seeking any major policy changes in your chosen office? If yes, what would those changes be? If no, why not?

Yes. I’ll vote for: Stricter voting laws for legal residents, stricter school standards for each and every grade and every student to ensure our Wyoming students are never second best. A return of more moralistic, Christian American way of life that the founders wrote in the Constitution and Bill of Rights.

We need to get back to good old American family values, when honesty and integrity and a handshake was all the assurance you needed that your word was your Brand.

NOTE: All primary candidates who filed to run for a seat in the Wyoming Legislature were sent questionnaires at the same time and Oil City News will publish responses in the order they are received. Candidate responses are only edited for clarity and style.