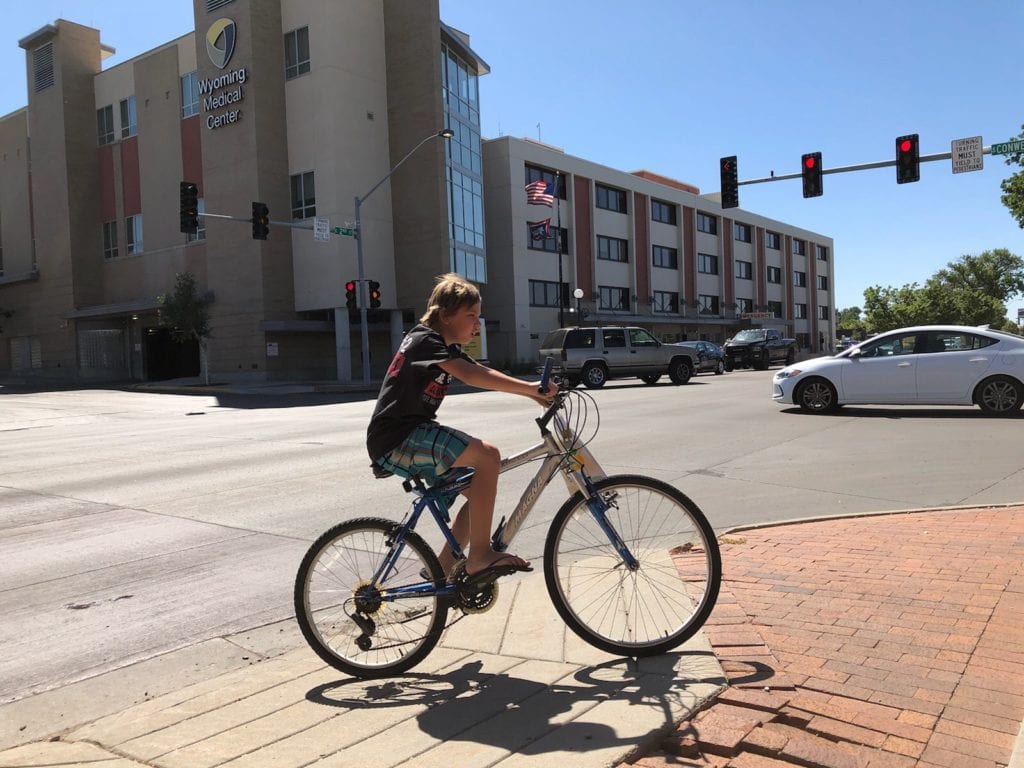 A bicyclist crosses the street at Second and Conwell near the Wyoming Medical Center in Casper. (Dan Cepeda, Oil City)

CASPER, Wyo. — Incumbent Natrona County commissioners have recently pushed back on accusations lobbed by challenger Dallas Laird on property taxes, the sale of the Wyoming Medical Center in 2020, and benefits of county projects to members of the commission personally.

“What’s happening to our community is terrible, because they’re scared. One Wyoming Supreme Court judge said, ‘Taxes can be a death penalty to the people,’” Laird said.

Laird had previously said the commission should do more to help taxpayers, and the commission has responded that its authority is limited by state statute, and that legislative reforms are needed.

On previous occasions, Laird has also written editorials and spoken at forums saying the Wyoming Medical Center was sold at well under market value, based on his conversations with a former WMC chief financial officer.

Natrona County appoints representatives to the WMC board, but did not control or fund the day-to-day operations. It owned the land, buildings, and tangible assets. Those assets were valued by VMG Health at $157 million. The county got that and an additional $50 million to erase outstanding debt related to the construction of the west tower in 2012.

Laird also suggested that the net proceeds to the county, about $118 million, could have been used to repair the seven miles of water line to Midwest — one of two projects that would have been served by a temporary sixth-cent tax defeated at the polls last November — and shore up salaries and other county operations.

“It was the view of all the commissioners that we would never touch the corpus,” commission chair Paul Bertoglio told Laird. “We’d treat those dollars like solid walls, because once it’s gone, it’s gone.”

Bertoglio said the county planned to keep the proceeds invested and only use the interest. The commission is also looking ahead to a proposed constitutional amendment on the ballot in November that would allow local governments to invest in equities and earn higher returns.

Speaking at a forum in July, Bertoglio added that the WMC board had initiated the conversation about selling a year before the sale.

“Some of the brightest people in Casper looked at the medial situation and said, ‘We can’t get going the way we’re going,’” Bertoglio said. While other independent hospitals struggled with rising costs across the country, joining with Banner was seen as a way to ensure financial stability and access to a large supply-purchasing chain and greater stability.

Casper City Council Vice Mayor and two-year seat candidate Steve Freel acknowledged these advantages of the sale at the forum, but said that he had heard of local accounting jobs being lost to Banner’s home state of Arizona. Candidate Terry Wingerter said he worried now that the guarantee to retain employees for 24 months had expired.

Candidates Curt Simpson and school board member Kianna Smith also had misgivings about the sale, but Smith said the focus should now be on investing the proceeds. Air Force veteran and antique store owner Shianne Houston, also running for the commission, agreed that a big corporation like Banner may change the “feel” of the hospital, and hoped it would make good on its obligations to provide certain services.

Laird also questioned the wisdom of selling to Banner, which had agreed to pay $18 million in 2018 for submitting false claims to Medicare.

Laird told the commission at its last meeting that he’d been speaking to citizens who had various complaints about county operations such as the fairgrounds. He also said some people were speculating about why commissioner Rob Hendry was only running for a two-year seat.

“They think he’s doing it because he’s selling the county his gravel. I don’t know that that’s true, but that’s one of the things that they say,” Laird said.

In his response during commissioner’s comments, Hendry said he had donated the gravel from his hillside near Arminto “to the tune of somewhere between 50 and 80 thousand dollars’ worth of gravel. I gave to the county.”

Hendry acknowledged that the road from Arminto to Lost Cabin, which benefited from the project, was near his ranch.

“Well sure, I use it. They also graveled down to Lost Cabin, which is one of the biggest, deepest gas fields in the country, in the world. … There’s a lot of traffic that comes out of Casper and goes down Lost Cabin Road.”