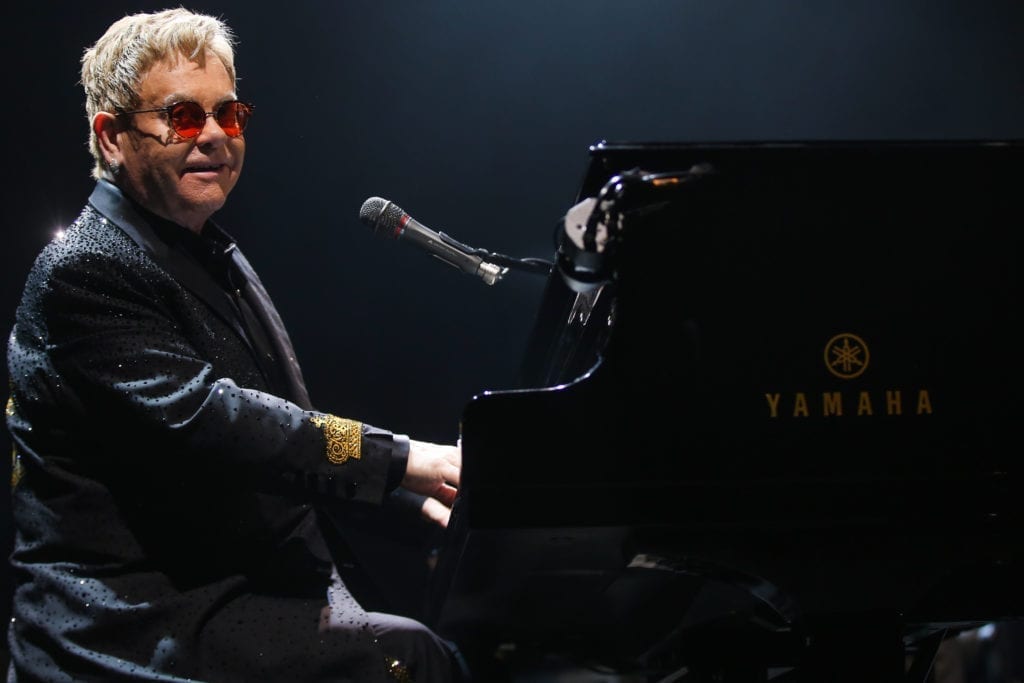 Elton John and his band perform during the Wonderful Crazy Night Tour on, Mar. 15, 2017, at the Casper Events Center.

Fifteen days shy of his 70th birthday, Sir Elton John and his band returned to Casper for one night only during the Wonderful Crazy Night tour. Concert goers from all over Wyoming filed into the Casper Events Center, filling a nearly sold out venue for the artist. He slipped through the darkness to take a seat at his piano where he would spend the next two hours serenading a crowd of Wyomingites.

Beneath a pair of circular, orange-tinted glasses the legend himself welcomed the masses with a twelve minute opener. If you wanted the hits, he delivered. The unmistakable “Bennie and The Jets” tune found its way from the stage to the already swaying crowd for the second song of the night. The front row of the concert was filled with attendees, young and old, as generations collided during the performance. His “Rocket Man” had the arena on their feet singing along while space visuals flashed upon the screen behind them.

There was no shortage of thanks from the performer. He crossed the stage, glittering back and forth in a black sparkling suit to thank every inch of the Events Center for their attendance. He praised them for buying the records, the singles, the cassettes, and most importantly the tickets to this concert. Elton John gave a mention to his bandmates, Davey Johnstone on guitar, John Mahon on percussion, Kim Bullard on keyboards, Matt Bissonette on bass, and Nigel Olsson. Nigel has been with touring and performing with Elton John since 1969, an announcement to which he waved with gloved-covered hands from behind a monstrous drum set.

The most touching moment of the night was Elton John’s recognition of Judy Shepard in the crowd of thousands. Judy Shepard, mother of Matthew Shepard, founded the Matthew Shepard Foundation following her son’s murder in October 1998. Matthew was a Casper-native who attended the University of Wyoming and was allegedly targeted based on his sexual orientation. His murder brought forth national and international awareness and changes in legislation surrounding hate crimes.

The singer mentioned a photo of Matthew given to him by Judy Shepard that still remains in his home. He says “Hello” to Matthew every day. He followed this moving tribute with “Don’t Let The Sun Go Down on Me,” as the crowd quietly swayed back and forth. A picture of late singer George Michael flashed upon the screen during the final notes.

Moving on from a somber mood, the singer picked the energy back up with “The Bitch is Back.” A group of white-haired women in sweater vests jumped up and down, out of their seats. Percussionist John Mahon brought some of the tiniest Elton John fans on stage for a chance to shimmy back and forth in front of thousands. A little boy donning a red t-shirt and blue jeans was placed atop Elton John’s piano, tapping a tambourine to the beat.

The performer closed with “Saturday Night’s Alright,” the crowd was on their feet. They wanted more. After a standing ovation and cheers for a return, Elton John stepped back out onto the stage. He fluttered about the front of the crowd signing autographs for those lucky enough to be so close to the stage. Sitting back down came his best-selling single of all time, “Candle in The Wind.” The crowd held up cell phones, the virtual lighter, and actual lighters for those old enough to remember.

The first few notes of “Crocodile Rock,” made their way through the crowd and they were on their feet again. People took to the aisles for the final song of the night, their faces happily flashing on screen.

And then, just as it had started, it was over. Sir Elton John slipped back through the stage darkness after a final wave to the crowd, on to the next one night only town.