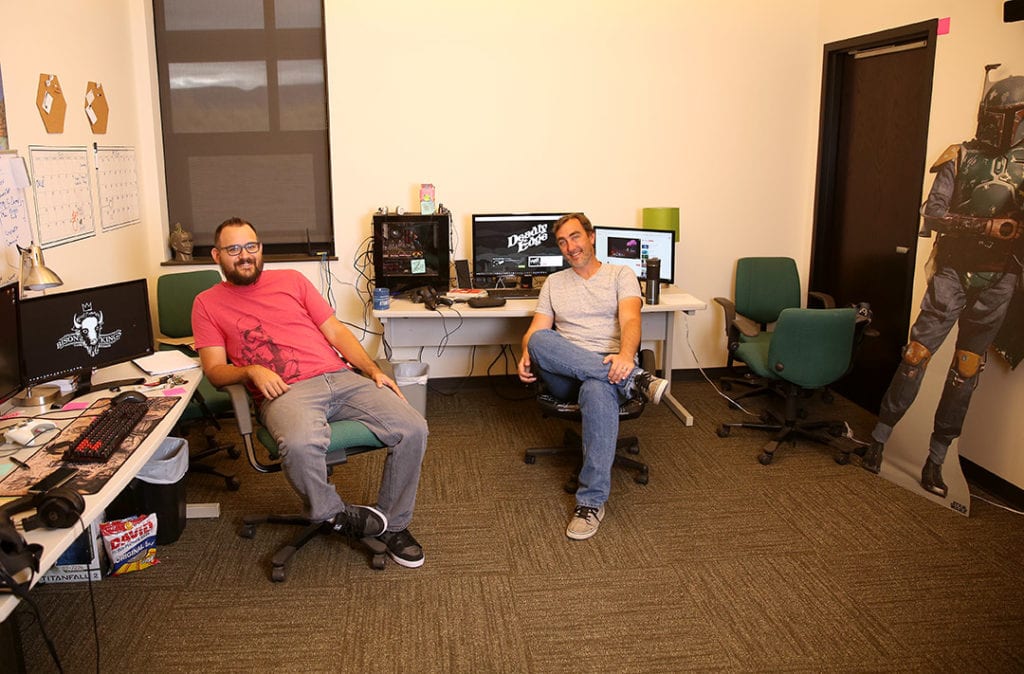 Game developers from around the state are set to participate in a worldwide game developing event for the second year in a row. The Global Game Jam will kick off Friday, January 25 at 5 p.m.

Bradley Erickson and Eric Lewis, the owners of Casper based Bison Kings Game Studios, are helping organize Casper’s participation in the global event. Erickson says the Global Game Jam is a 48-hour game creation event in which teams of game developers, artists and musicians all over the world gather to produce games in a short and intense amount of time.

The game jam will be hosted at the Wyoming Technology Business Center in Casper. Erickson says each year’s event is centered around a secret theme which will be revealed once the jam gets going on Friday.  He says last year’s theme was “transmission” and two teams in Casper produced games titled “Planet Deth” (sic) and “Window Pain.”

“It’s a really fun experience even if you’ve never done it before,” Erickson said. “You get to meet all these people and make friends, but you also get to grow as a developer. You should give it a shot.”

He says the event is geared towards game developers and artists, but that anyone is welcome. He helped put on a similar event in October 2018 called the Wyoming Game Jam.

“At the Wyoming event we had one person who’d never made a game before,” Erickson explained. “We’re looking for artists, musicians or anyone who works with sound. Anyone is welcome. You don’t need to know a lot of programming.”

“The weekend stirs a global creative buzz in games, while at the same time exploring the process of development, be it programming, iterative design, narrative exploration or artistic expression. It is all condensed into a 48 hour development cycle. The GGJ encourages people with all kinds of backgrounds to participate and contribute to this global spread of game development and creativity,” he wrote in a press release.

Erickson says the event is a fun way for gaming enthusiasts to meet new people and get involved in the community. He says that participants will likely split up into a couple of teams and develop a few different games like they did at the previous year’s jam, pending turnout.

“I think we have eight people registered right now, but a lot of people just show up,” he said. “We had a ball [at last year’s jam].”

Erickson also says that the Global Game Jam is well organized and gives a lot of support to the various teams across the planet.

“There’s 144 countries [participating] or something crazy like that,” he added.

For anyone concerned about not getting enough sleep over the weekend, Erickson says not to worry.

“We have some people go home or back to their hotel to get a full night’s sleep,” he said, pointing out that people from different parts of the state travel to join in the jam. “I just crashed at my desk when I got too tired. But we try to encourage people to be healthy.”

Erickson said that the games that come out of the jam are made available for people to play for free via the Creative Commons, which is a kind of copyright licensing that allows open access distribution and use.

“We usually at the end [of the event on Sunday] have an hour or two to play each other’s games and talk about what worked or what didn’t work,” Erickson told Oil City. “People do pick up ideas or themes during the jams that go on to make commercial products.”

“Think of it as a hackathon focused on game development,” he said in the press release. “It is the growth of an idea that in today’s heavily connected world, we could come together, be creative, share experiences and express ourselves in a multitude of ways using video games – it is very universal.”

The event will get going Friday at the Casper branch of the Wyoming Technology Business Center located at 2435 King Blvd.