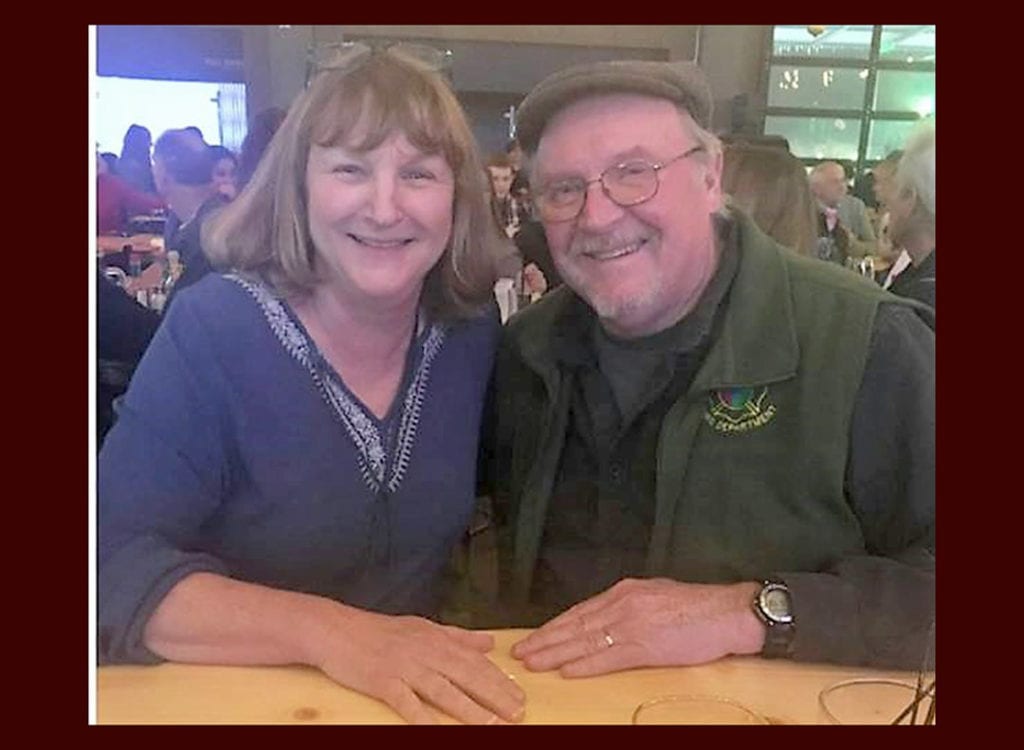 Laurie and Sam Weaver pose together in an undated photo. Sam’s organs were donated after he died last year. (Courtesy)

Laurie Weaver says she’ll often replay in her head the last words she and her husband had.

“The last thing I said to him was ‘I love you,'” recalls Laurie.

One year ago, Sam was in the Wyoming Medical Center about to start physical therapy after a fairly common procedure. Laurie called Sam to say she was en route to the hospital from their house on Casper Mountain.

Just before she arrived, Sam suffered a massive stroke and collapsed.

“It was severe and irreversible, so they weren’t able to save him,” said Laurie. Though uncommon, the stroke was one of the possible side effects from the surgery.

Laurie suddenly faced life without the man she was married to for 35 years. Sam, the NCHS teacher nearing retirement, the Casper Mountain Ski Patrol veteran, the father of their three children.

In the whirlwind of grief and confusion, Laurie was informed that Sam had just renewed his driver’s license and listed himself as an organ donor.

“I said, ‘oh my gosh, absolutely,'” recalls Laurie. “That was his desire and we’d talked about that before. There was no doubt in my mind that he’d be an organ donor.”

In honor of her husband, Laurie will be a guest at a flag raising ceremony to kick off this year’s “Donate Life Month” on Tuesday, April 2, at 12:45 in front of the Wyoming Medical Center.

Laurie recalls the sensitivity staff from Donate Alliance Wyoming and the Wyoming Medical Center showed as her husband was kept on life support to preserve his organs.

“They treated my husband with such respect,” said Laurie. “It was so comforting.”

Donor Alliance sent a team from Colorado to take over care from the Wyoming Medical Center, said Laurie. That included a social worker to talk with the family. “These people were incredible,” recalls Laurie.

Another two days or so passed as logistics were worked out before Donor Alliance flew Sam to Colorado to have his organs harvested.

“On April 1st last year, Easter Sunday, they took his organs, found recipients and did the donation,” said Laurie.

Before taking Sam to Colorado, Donor Alliance asked his family to write down some of their favorite memories with him.

“Before they started the retrieval, they read the cards so everybody that’s there knows about that person,” said Laurie. “They know he was loved, was a world traveler, that he loved Casper Mountain.”

“For us as a family it was a horrible time, but to know that he was able to give that gift and help other people to survive really brought us peace and comfort,” she said.

In an interview last year with Oil City News, Ryea O’Neill of Donor Alliance said just one individual can save up to eight people through organ donation, and up to 75 people with tissue donation.

Organs include the heart, both lungs, liver, both kidneys, pancreas and small intestine. Tissue donations consist of skin, bone, and heart valves. Corneas from the eyes are also used.

About six months after Sam’s death, Laurie was given some information on the people who now live because of her husband’s donation.

“I really wanted to know how they’re doing and that was important. I was able to write a letter and send a picture of my husband,” said Laurie.

“There’s just something…I can’t describe the feeling…of knowing that he was able to give this gift and that somebody is enjoying their life.”

This past year Laurie has kept busy by visiting her children. She has also participated in Donor Dash runs to raise awareness, and will participate in Casper’s upcoming Donor Dash on April 20.

On the anniversary of Sam’s death and gift of life, Laurie is grateful for her memories and his legacy.

“I was so proud of him for making that decision,” said Laurie. “I was so thankful that on Easter Sunday there were other families that were getting the news that their loved one would survive and live on.”

A flag-raising ceremony to honor Sam Weaver and mark Donate Life Month takes place in front of the E.R. at the Wyoming Medical Center on Tuesday, April 2, at 12:45. Visit Donate Life Wyoming to learn more about organ donations by clicking here.