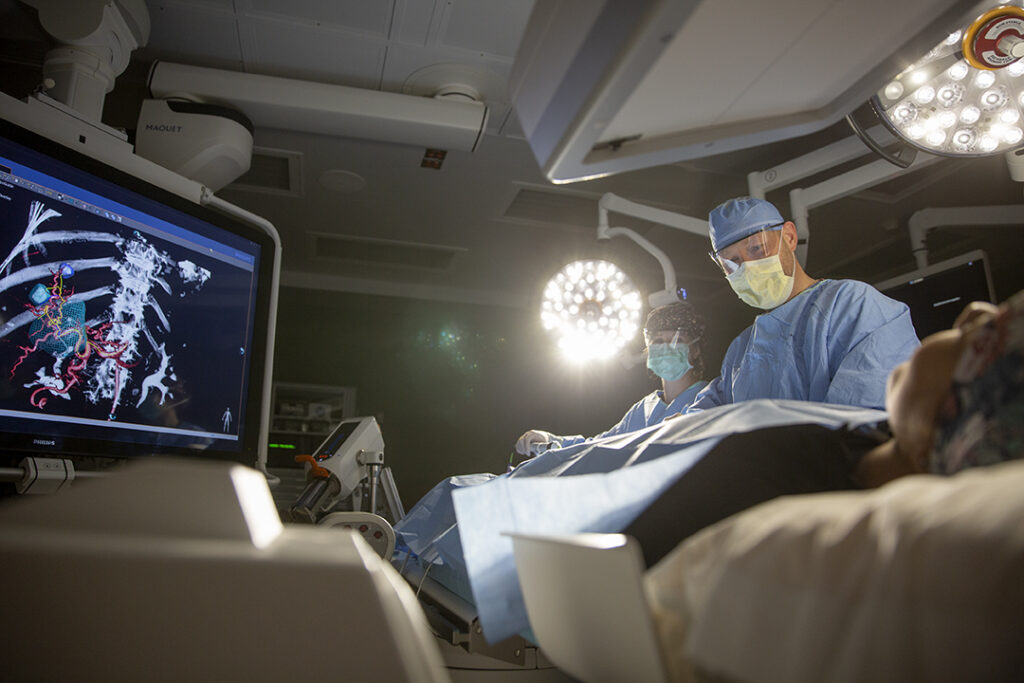 CASPER, Wyo. – An area at the Wyoming Medical Center where salads and sandwiches were once served now houses one of the most cutting edge pieces of medical technology in the state.

The WMC’s new Interventional Radiology Suite was unveiled during press tours on Wednesday morning. The suite was built inside the hospital’s former cafeteria space, which was vacated when the new West Tower opened in 2014.

For the new suite, the hospital invested in what is considered the state-of-the-art in medical digital imaging, according to Eric Cubin, MD, medical director of the new suite and an interventional radiologist at Casper Medical Imaging and Wyoming Medical Center.

“What we do in intervention radiology is so cutting edge, so science fiction, it doesn’t make a lot of sense,” said Dr. Cubin.

“What we’re doing is surgical procedures on people using imaging guidance without making incisions in them,” explained Dr. Cubin. “You need to be able drive a catheter or piece of equipment through a person’s body without cutting them open, using only x-ray imaging to know where you’re going.”

Single-plane fluoroscopic imaging has been around for some years, but the new 3D imaging makes seeing inside the body much easier, enabling faster, safer and eventually more advanced treatment for patients, according to Dr. Cubin.

The technology can be utilized for numerous cases, ranging from pinpointing cancer on organs, stroke treatment and even severe trauma cases.

Using the technology in stroke cases, for instance, can dramatically improve a patient’s outcome, according to Dr. Cubin.

In real-time, a doctor can run a catheter through a small incision in the groin, snake around the heart and into the brain where they can “grab the clot” and restore blood flow to the brain.

“It’s the only thing that has ever been shown to significantly improve outcomes in stroke patients,” he said. “The faster you’re able to get there and do that, the better chance the patient will recover.”

In cancer treatments, rather than remove most or all of an organ in surgery, a catheter can be inserted and used to pinpoint and remove or treat specific tumors.

The new 3D bi-plane x-ray is phase one of an expansion of the interventional radiology suite, according to the WMC. Phase two will include a new CT scanner with CT fluoroscopy capabilities.

The new technologies will continue to reduce the use of major invasive surgery for cancer treatment, said the WMC.