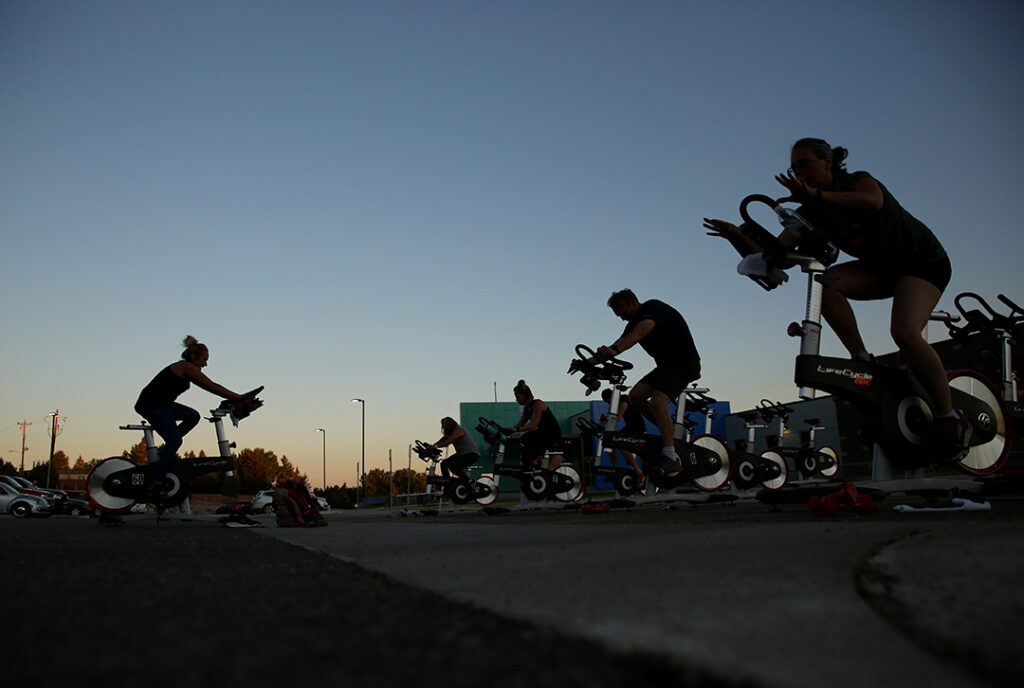 Spin instructor Mary Oster leads a spin class in the parking lot of the YMCA of Natrona County on Tuesday morning in Casper. The outdoor class was designed to give people an opportunity for a COVID-friendly activity. (Dan Cepeda, Oil City)

CASPER, Wyo. – Bailey Mason is wheeling two heavy spin bikes through a parking lot on a crisp, pre-dawn morning at the YMCA of Natrona County.

Mason is the healthy living director at the Y, and she’s helped by other staff members as they set up for their first outdoor spin class. She wasn’t sure how smoothly the setup would go at first, but everything came together well.

“We’re going to set up 12,” she said. “We have seven people signed up but usually more show up for spin classes.”

“We’re doing anything we can to offer more to the community that’s COVID-friendly,” she said. Mason organizes weekly outdoor fitness classes at David Street Station, but the spin class is new “mainly because it’s so hard to move the bikes.”

“We have a lot of die-hard cyclists who love the classes and wanted something outdoors as well.”

The community-focused Y, like other gyms, was hit hard by the COVID pandemic earlier this year.

“It was pretty scary,” said Mason, “but I knew we have a strong community and was pretty optimistic…it’s been really nice to see the community stick with the Y.”

The spin class took place on a section of parking lot right in front of what will be the Y’s new pool facility. A groundbreaking ceremony is scheduled for next Thursday, August 20.

Under the deep-blue dawn sky, participants found a bike, made adjustments and started warming up. Only one bike needed to be moved around a bit to address a wobble, but it was quickly resolved.

At a near-perfect and windless 60 degrees, the impromptu outdoor gym was ready for the workout. Spin instructor Mary Oster set the tone early, with a classic ska track by The Specials getting the beat going. Songs by Kanye West, Black Eyed Peas and Johnny Cash echoed off the concrete as Oster raised heart rates and made the sweat pour.

At one point during a recovery, one rider pointed out a deer watching the activity from a grassy hill.

“This is way better than inside,” someone shouted.

An original version of this story stated that a groundbreaking for the Y’s new pool facility was being held Wednesday August 19, 2020. This is incorrect. The groundbreaking will be held Thursday, August 20, 2020. Oil City regrets the error.