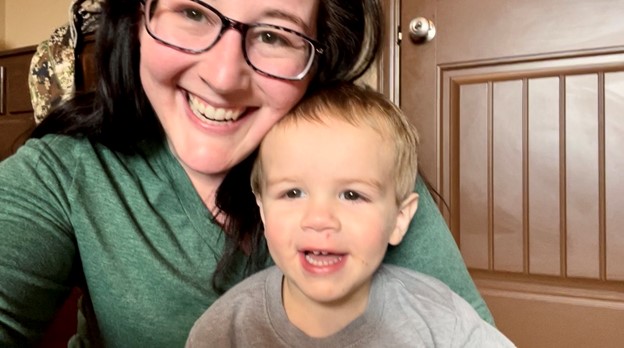 Kala McWain and her son Braxton, who was born with PKU. (Courtesy Kala McWain)

CASPER, Wyo. — A Mills mother is calling on Wyoming’s U.S. Sens. John Barrasso, Cynthia Lummis and Rep. Liz Cheney to take action to support the medical needs of her 2-year-old son and others living with a rare genetic disorder called phenylketonuria, or PKU.

Children with PKU can experience a range of symptoms from mild ones like musty skin, breath odor or skin rashes up to more severe problems like seizures, growth problems and behavioral problems, according to Johns Hopkins All Children’s Hospital. If left untreated, PKU can lead to developmental delays and permanent intellectual disability, Johns Hopkins states.

Kala McWain’s son Braxton was born in 2020. Screening for PKU is mandatory in all 50 states and Braxton tested positive for the disorder at 3 days old, Kala said in an interview Tuesday.

PKU is a metabolic disorder “caused by a defect in the enzyme that breaks down the amino acid phenylalanine,” Johns Hopkins says. Therefore, a special diet is typically a treatment doctors recommend to help prevent symptoms.

Babies with PKU are also unable to consume ordinary formula. Special baby formula they can safely consume costs as much as $1,000 per month, Kala said.

There is a loophole that allows insurance companies to get around Wyoming mandates that state that medical foods must be covered by insurance, Kala said.

“However, ERISA reserved for the federal government the power to regulate any health plans provided directly to employees by employers without going through a separate insurance company (so-called “self-insured” plans). This creates the ‘ERISA pre-emption’: by claiming this right, the federal government removed it from the states’ rights. Since that time, the federal government has passed COBRA and HIPAA, in part to protect insured employees from losing insurability when they lose or change jobs. However, federal laws have done little to regulate the content of employer-provided health care plans.”

The ERISA pre-emption means that federal action would be needed to resolve insurance coverage issues related to PKU that Kala and others are concerned about.

Kala is therefore calling on Barrasso, Lummis and Cheney to support the Medical Nutrition Equity Act, which would require health insurance companies to cover formulas and foods that her son and others living with PKU depend upon.

In the McWain family’s case, they have insurance that covers such medical foods but through a deductible. That means the family can incur high costs in purchasing the foods Braxton needs before help from their insurance kicks in. Kala noted that the family relies on an online store called Ajinomoto Cambrooke to purchase foods that contain proteins Braxton is able to safely eat while living with PKU. Costs are high, with a bag of pasta running about $13 and flour replacements costing $30 or more, Kala said.

Kala said she thinks her family is lucky to have the insurance they do have, which covers special baby formula that costs around $1,000 per month. Other families may not be so lucky, she said.

With some insurance companies relying on the loophole under ERISA to get around state mandates that they cover medical foods, Kala said some families have found their own kind of loophole to obtain plans that will help cover their needs.

She noted that Wyoming Medicaid covers low-protein foods and said that she is aware of people in Wyoming who were otherwise happily married but filed for divorce in order to have their income be below the poverty line in order to qualify for Medicaid.

For people facing high medical costs, Kala said it sometimes makes financial sense for them to forego higher-paying jobs in order to qualify for Medicaid.

“If we wanted to try to live below poverty level, we could in order to get formula covered,” she said of her family.

There are drugs that can help treat PKU, but not everyone responds to those, Kala added.

While PKU is rare, Kala has met some other families in Wyoming living with PKU, including one in Casper, two in the Sheridan area, one in Cheyenne and another in Laramie. She has also connected with a number of people across the country via the internet and tries to advocate for the medical needs of the community via Instagram.

Kala said what she is advocating for is equity in medical support offered to people across the financial spectrum. She said the wording in some insurance plans should change to ensure that medical foods get covered regardless of if they are consumed through a feeding tube.

“He can eat, he just can’t eat the foods we eat,” she said of Braxton.

Kala met with people from Cheney’s, Lummis’s and Barrasso’s offices last year and was able to have a brief conversation with Barrasso himself, she said. She’ll be meeting again with people from their offices this year at an event called “Rare Across America” put on by the Every Life Foundation.

She’ll be advocating for Wyoming’s Congressional Delegation to cosponsor the Medical Nutrition Equity Act. Even if she’s able to get some verbal commitment of support, Kala said she has some doubts that the politicians will follow through with getting the changes done. She suspects the politicians or people working in their offices might indicate some support and then drop the issue after the election this November.

Kala added that she thinks there is some misunderstanding about what PKU is and why special medical foods are needed.

“I think it does get misunderstood for a gluten-free diet,” she said.

The Medical Nutrition Equity Act would benefit people living with disorders other than PKU as well, Kala noted, adding that the “Rare Across America” event is not specific to PKU.

While the Medical Nutrition Equity Act has secured cosponsors from both major political parties, Kala said it is noticeable that Republican support is relatively lacking. If Republicans see themselves as pro-life on the issue of abortion, Kala said she thinks the consistent position would be to support life after birth as well.

“If you’re pro-life, you should be pro–supporting my son’s medical needs,” she said.

Kala encouraged people wanting to help move the needle on the Medical Nutrition Equity Act to communicate where they stand to Wyoming’s elected officials. She said the National PKU Alliance has a form people can follow to send communication to politicians.

Johns Hopkins All Children’s Hospital and the National PKU Alliance have more information about how PKU affects both children and adults.