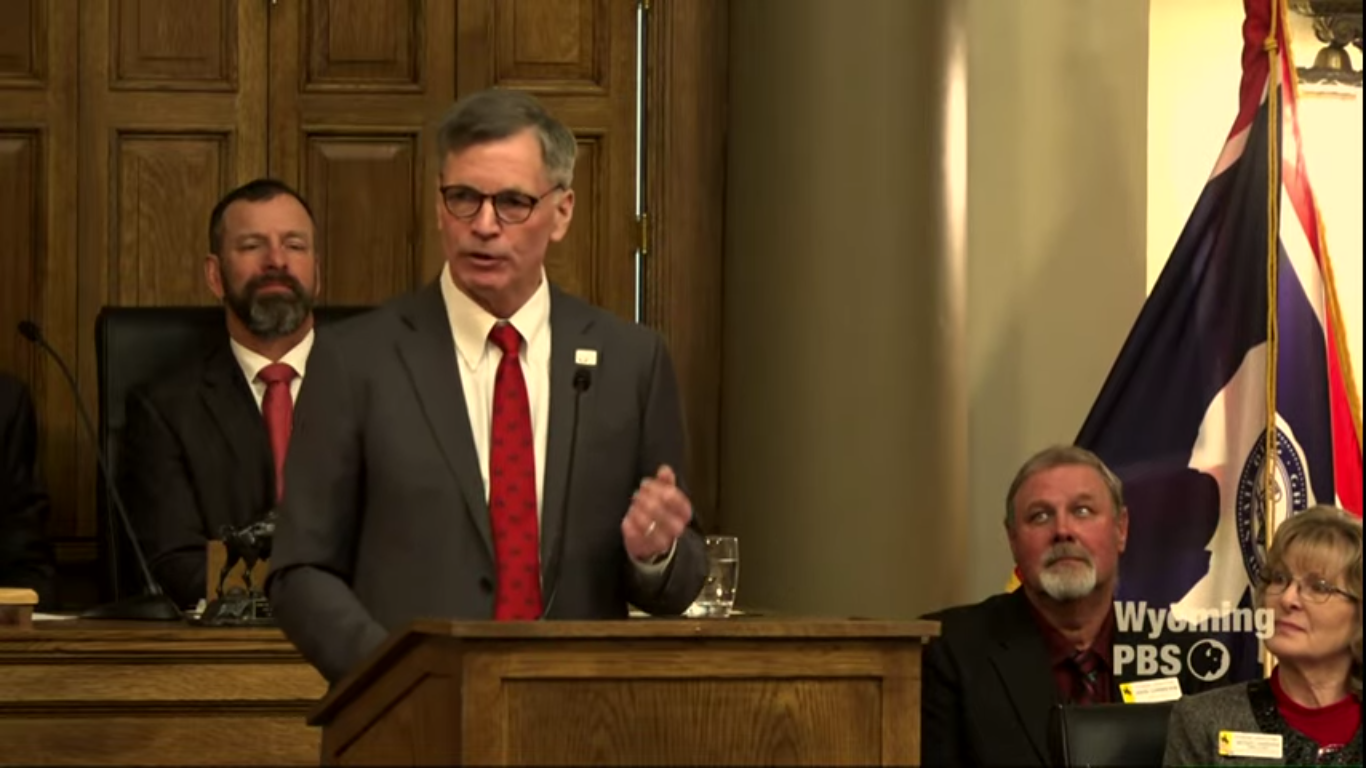 Governor Gordon delivers his 2022 "State of the State" address on Monday. (Screenshot via Wyoming PBS, YouTube)

CASPER, Wyo. — Wyoming Governor Mark Gordon delivered his “State of the State” message to the Wyoming Legislature on Monday, February 14 as the legislature convened its 2022 budget session, highlighting aspects of his proposals for the state’s new biennium budget.

On the topic of energy, Gordon spoke critically of the administration of President Joe Biden.

“Stopping the exploration and production of federal oil, gas and coal means that our state bears a disproportionate burden of reduced royalties, reduced severance taxes and reduced economic benefit,” Gordon said. “And for what?”

“These actions won’t reduce global warming or benefit consumers. Instead, they have caused inflation to soar. As a matter of fact, during 2021, while the Biden administration was limiting oil production in Wyoming, it increased Russian oil imports and called for more production from OPEC.”

The Biden administration in August 2021 called on the Organization of the Petroleum Exporting Countries (OPEC) to increase oil production to help increase global supply after OPEC had implemented production cuts during the COVID-19 pandemic, according to Reuters. That came after federal oil and gas lease sales that had originally been slated to take place in spring and summer 2021 in Wyoming and elsewhere were deferred due to an executive order from Biden that implemented a pause on the sales.

“Mr. Biden, tear up your energy policy,” Gordon said, with his words recalling the cadence and phrasing of former President Ronald Reagan’s Berlin Wall Speech that was delivered in 1987.

Gordon called for an energy policy that makes room for fossil fuels and new sources of energy, arguing that Wyoming is well poised to help execute an all-the-above energy strategy.

“Let Wyoming power our country,” the governor said. “Give us the tools and that chance to make the nation energy independent again. Wyoming has it all: best wind, solar, gas, coal, nuclear and the ability to store over 50 years of our nation’s carbon emissions.”

“Innovation, not regulation is our way forward to give our nation the energy it requires and simultaneously solve the world’s climate concerns. We don’t need to choose between fossil fuels or new types of energy.”

Gordon said that Wyoming’s energy sector has a variety of new opportunities on the horizon, including advanced nuclear, carbon capture utilization and sequestration, bioenergy, hydrogen and “better, cleaner ways to burn and use our coal and other fossil fuels.”

He said that the state is leading in terms of research that can keep legacy industries viable and can help advance new industries as well.

“We must seize these opportunities and we will by fighting ridiculous regulation, promoting sensible development and embracing new opportunities,” Gordon said.

He added that his budget proposal asks for the ability to utilize up to $100 million to match federal and private investment in large-scale energy projects.

“That will help us grow and innovate our mineral and energy economies and that is essential to our future,” Gordon said.

Setting a new budget is one of the primary tasks of the legislature during the 2022 budget session. The proposed budget bill that is being considered by the legislature is available here.

The governor’s full “State of the State” remarks can be heard in Wyoming PBS’s stream of the speech via YouTube: