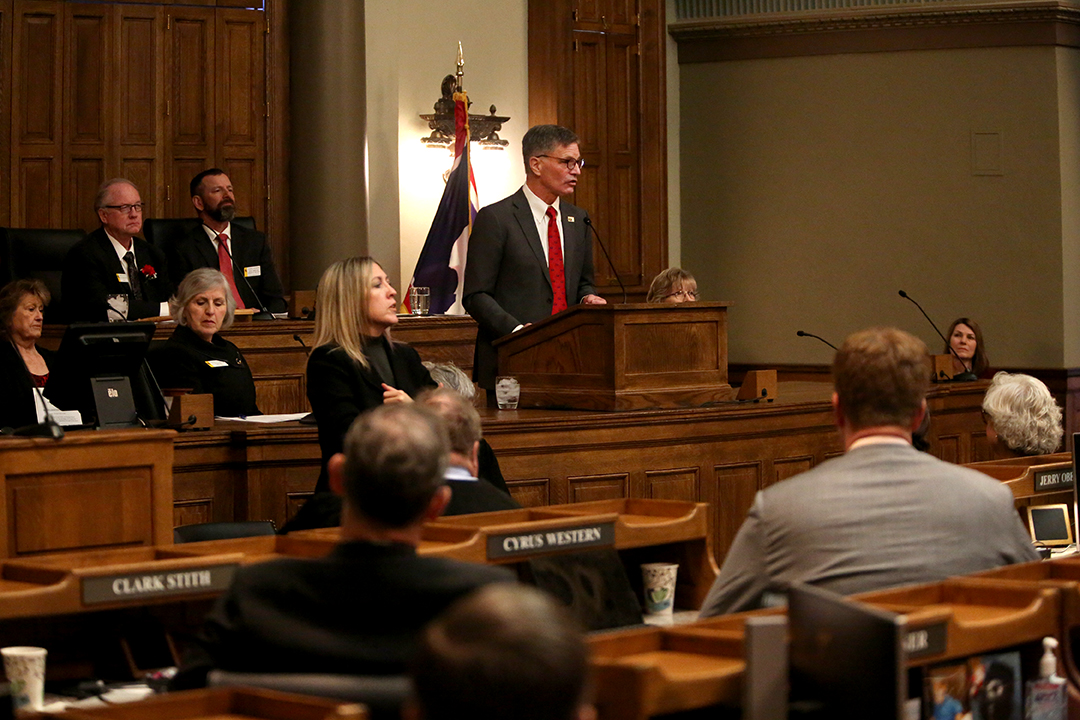 Wyoming Governor Mark Gordon delivers his State of the State address at the start of the 2022 Budget Session. The legislature passed a "trigger law" to ban abortions if Roe v. Wade were overturned during the session. (Dan Cepeda, Oil City)

Wellspring Health Access had been planning to offer abortion services at a new clinic in Casper, but states can now ban abortion as a result of the Supreme Court’s decision. Wyoming is one of 13 states with a “trigger law” on the books, and abortion could be banned in the state if Governor Mark Gordon certifies the Supreme Court’s decision after the state attorney general completes a review and report. Wyoming’s trigger law gives the attorney general up to 30 days to complete their review and report.

Julie Burkhart, founder and president of Wellspring Health Access, said during the press conference Thursday that the organization is considering a lawsuit challenging Wyoming’s trigger law. The trigger law was signed this spring after it passed in the Wyoming Legislature.

The Casper clinic is still planning to open, but that could take 4 to 6 months, Burkhart added. It had initially been set to open in June, but that was set back after the building was damaged in suspected arson and vandalism in May, and Burkhart said demolition and reconstruction is needed before the clinic can open. The Casper Police Department suspects a white female was responsible for the arson and a $5,000 reward is being offered to anyone who can provide information that leads to an arrest. That reward is being offered by the Bureau of Alcohol, Tobacco, Firearms and Explosives Denver Field Division.

The Supreme Court’s decision to overturn Roe v. Wade and Wyoming’s trigger law were more pressing matters than the arson for Burkhart and others who spoke Thursday.

Rev. Leslie Kee, a Unitarian Universalist minister and member of Wellspring Health Access’s advisory board, said she thinks the Supreme Court’s decision is a result of the religious fundamentalists pushing an agenda and interpretation of the Bible not shared by most Americans, saying Christian fundamentalists worked hard to get six conservative justices appointed to the Supreme Court.

“Religion has been used to privilege one point of view over all the others,” Kee said, adding that she thinks abortion bans amount to the government enforcing the moral views of religious fundamentalists over women’s control of their own bodies.

Kee said the Supreme Court’s decision makes her ask whether the country is on a path toward treating women in a manner similar to the Taliban.

Sharon Breitweiser, executive director of Pro-Choice Wyoming, said the Supreme Court’s decision and the Wyoming Legislature’s passage of a trigger law this spring highlight the importance of voting in elections.

Wyoming’s reproductive laws were not always as extreme, but Breitweiser said she thinks the state has become one of the worst, pointing to the trigger law that is likely to lead to the banning of abortion in the state after the Supreme Court’s overturning of Roe v. Wade. Voters electing “anti-choice extremists” led to Wyoming’s trigger law, from Breitweiser’s perspective.

“People need to not only march and protest but get to the polls and vote,” she said, adding that pro-choice advocates need to recruit more pro-choice candidates to run in Wyoming elections.

One pro-choice member of the Wyoming Legislature said during Thursday’s press conference that he has concerns Wyoming’s pending abortion ban could be made even more strict during future legislative sessions. Rep. Pat Sweeney, who has represented House District 58 since 2017, said he was one of just a few Republican legislators to vote against the trigger law this spring.

“Abortion is a matter of personal choice and those decisions should be left up to each individual person,” Sweeney said.

While exceptions allowing abortions in cases of rape and incest were added to Wyoming’s trigger law late in the legislative process, Sweeney said he has concerns some legislators may attempt to introduce legislation to ban abortions even in these cases.

“That’s my biggest concern in this next session,” Sweeney said, adding that he thinks the state should at least protect women’s rights to abortions in such cases.

Christina Gonzalez, a registered nurse with Wellspring Health Access, said Wyoming already severely lacked access to abortion prior to the overturning of Roe v. Wade. She expects the decision will “turbo charge” a trend of reproductive health policies in Wyoming that are harmful to women.

Gonzalez said lack of access to abortion has negative impacts on women’s mental health and can contribute to increased socio-economic disparity.

“People should be able to get the reproductive healthcare they need free of shame, fear or stigma,” she said.

With Wyoming likely to ban abortions, Burkhart said more people will be forced to go out of state to seek abortion services or will be forced to carry unwanted pregnancies to term. She noted that groups like Chelsea’s Fund help provide support for women needing abortion care in areas where it is not available and said such efforts are crucial to providing care to women in Wyoming.

Wellspring’s Casper clinic is not structured to provide funding for patients to seek abortion services in other states, but Burkhart said that Wellspring may explore changes to provide such financial support.

With the clinic still months away from opening, the priority for Wellspring is reviewing all options to help protect the legal right to abortion in Wyoming, Burkhart said.