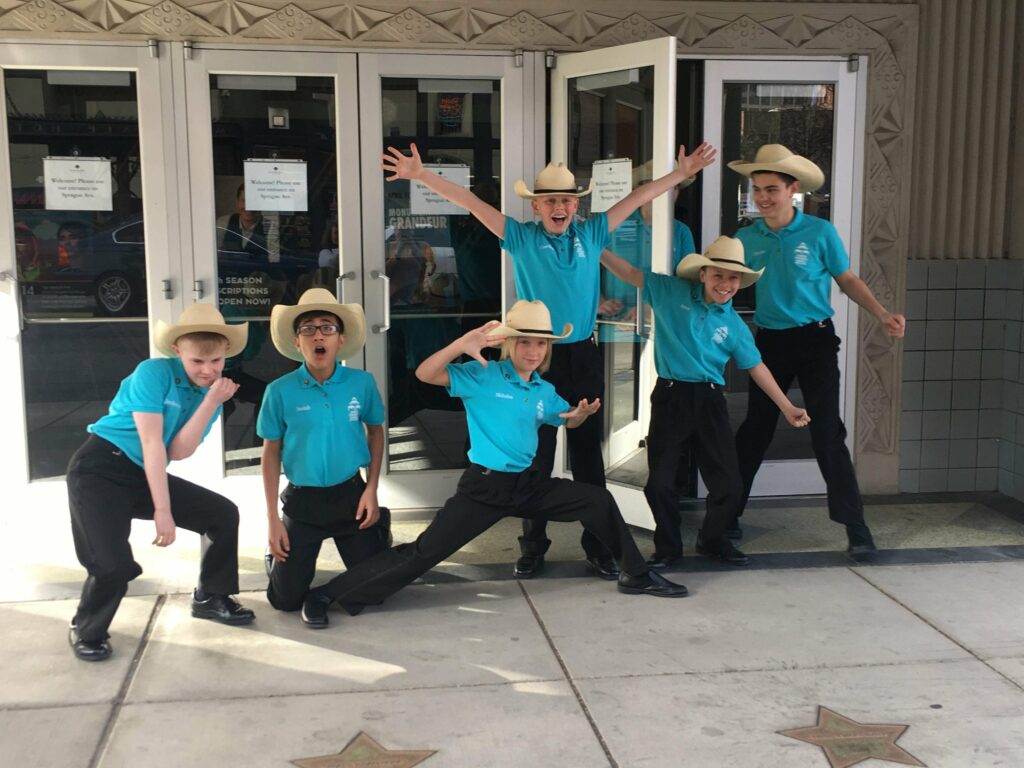 CASPER, Wyo — The Casper Children’s Chorale (CCC) narrowly zoomed out of Wyoming on their way to the American Choral Directors Association’s Northwest Regional Convention in Spokane, Washington before COVID-19 related restrictions in Wyoming and elsewhere began to go into effect in March.

“I’m going to write the book of this trip someday.” Director Marcia Patton said on Thursday, April 23. “Everything was closing around us, it was like a board game, moving through the spaces.”

On Thursday, March 12, Patton and 80 choristers of the Casper Children’s Chorale (CCC) were gathered backstage at the Fox Theater in Spokane, 15 minutes before stage time. That was when the organizers of the convention announced the event would be cancelled due to COVID-19.

Thursday’s events would still be held, however, and the chorale delivered its 25-minute program, spanning Vivaldi to “Ragtime Cowboy Joe.”

With the remainder of the Convention and scheduled appearances at elementary schools cancelled, the 80 children and 32 chaperones making the trip spent Friday in Spokane visiting the Cat Tales Zoological Park, walking River Front Park, and swimming at the YMCA.

With Saturday’s ACDA events cancelled and shifting its timeline, the CCC caravan of two chartered buses and one very-full SUV missed by 4 hours an ice storm that Patton said left the highway to Billings “strewn with wrecks. There was even a ‘sunk’ boat.”

Patton and the parents did their best to keep the focus and intent on group-building and making the journey a trip to remember.

“We did celebrate after 2 weeks coming back and no one was sick,” Patton said. We went though gallons of hand sanitizer. No one got on the bus without it.”

On Sunday, the CCC performed at Christ the King Lutheran Church in Bozeman, MT before the final six hour bus ride home.

Throughout the trip, news of the pandemic and closure announcements were trickling in through social media, including some concerns specifically regarding the CCC’s trip and re-entry to Casper as a health concern. According to a post on the CCC Facebook page, some children worried that they’d be quarantined upon return, or have to monitor their temperatures every day at school. They were 15 minutes from home on Sunday when the Natrona County School District announced the initial 2-week closure.

Zoom-ahead to today, and Patton and the choristers have not seen each other in person since returning from the trip. She meets with 20-25 of the choir members at time, 3 times a week, on the video conferencing platform Zoom.

Spring typically marks the grand finish of the CCC season and is important in terms of both performances and fundraisers.

Public closures have forced the cancellation of events key to the chorale’s  legacy. The local church and school tours, as well as the Bring a Friend to Chorale Rehearsal, are crucial to outreach and attracting new singers to August auditions for the new season beginning after Labor Day.

This year would have marked the 41st-annual Mother’s Day Concert. Patton says she’ll particularly miss the 30-year tradition in which CCC alumni join the Chorale on the stage to perform “In His Eyes.” When the Chorale’s “well-loved” copies of the sheet music deteriorated over the years, Patton tried to purchase more and discovered composition was out-of-print. So she contacted and asked composer Jill Gallina to republish it.

Patton says the online video technology doesn’t lend itself well to group singing, but she’s devised scavenger hunts and other “activities to keep us connected and invested as a group.”

Emma S, a third-year participant, spoke before the trip about connecting with other singers through the CCC: “I really like it here because it is a safe space to be where you can do what you love and make friends. This has pretty much become my home Tuesdays and some Thursdays after school.”

Patton reshuffles the groups by criteria like age and section every week, so the children can see more of their peers. All of them will be in virtual attendance on May 5th, when distinguished CCC alum Lila McConigley, now a professional soprano residing in London, will speak on kindness.

The Casper Children’s Chorale, founded by Patton, is renowned in the region and nationally for its accomplishments. Last year they performed in Texas at the Heritage Music Festival, where they won a Gold Award, the Adjudicator’s Award, and the singular Outstanding Choir Award from all three judges.

Patton networks with other choir directors around the country, and they are all discussing how they can cope indefinitely with social distancing measures. Choir members traditionally stand close, and the use of face masks would certainly complicate things. “The art comes from emoting with the face and the body to enhance the music,” Patton said. “That’s going to be difficult.”

Still, Patton is glad the ACDA Convention trip went through. From the group’s Facebook page: “We sang, we shared, we grew, we loved. We are not sure what comes next, but we WILL sing together again. “A truly amazing trip.”