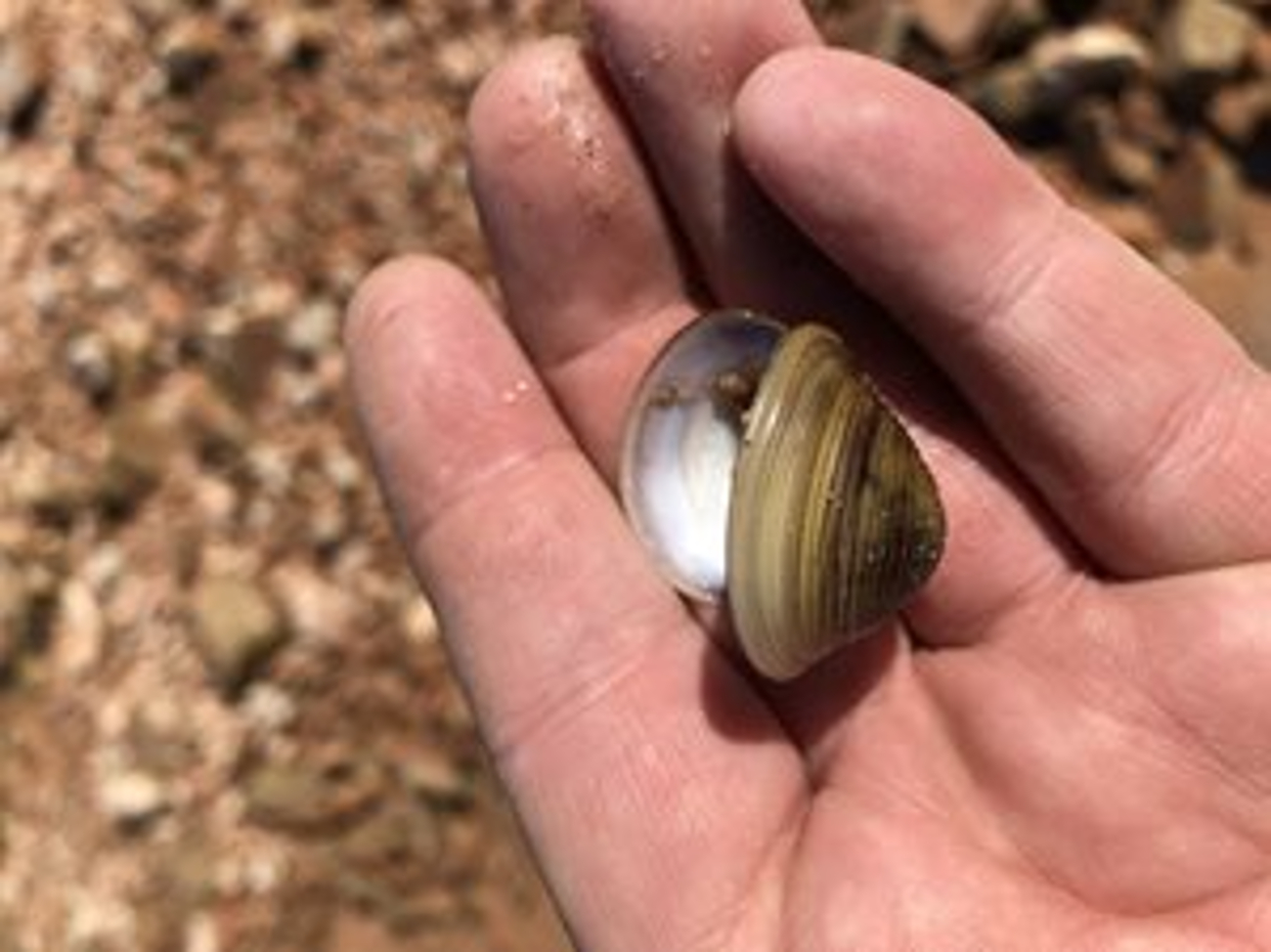 Asian clams, an invasive aquatic species, have been discovered in Glendo Reservoir. (Wyoming Game and Fish)

The presence of the invasive species was confirmed in Glendo in early September, the Wyoming Game and Fish Department said on Monday.

“We’re disappointed to verify the presence of Asian clams in Glendo,” said Eric Hansen, Casper Region AIS specialist. “This is not surprising as they are established just downstream, but it is unfortunate as it highlights how AIS continues to move within the state. We urge boaters to follow the law — Clean, Drain and Dry your watercraft after every use and stop at watercraft inspection stations.”

Asian clams were discovered in Guernsey Reservoir in 2019 and in the North Platte River in 2014, Game and Fish said. They are also present in the Fort Laramie irrigation canal, the Laramie River below Grayrocks Reservoir, Keyhole Reservoir and Horse Creek. A map of locations where invasive species have been confirmed in Wyoming is available online.

The invasive clams pose a risk to native aquatic species in Wyoming.

“Asian clams can spread easily and outcompete native organisms,” said Alan Osterland, chief of fisheries for Game and Fish. “Even though they have been found in Wyoming before, any spread of AIS is troubling because of the potential to change the current ecosystem.”

Asian clams are native to Asia, Africa, the Mediterranean and Australia, according to Game and Fish. Their introduction in North America is believed to have happened either intentionally as a food import or accidentally as an import along with Pacific oyster. The invasive species was first discovered in the United States in 1938 in the Columbia River, and the species is now present in 47 states, Game and Fish said.

“The discovery of Asian clams in Glendo underscores the department’s concern that zebra mussels could enter Wyoming, easily spread and cause damage to ecosystems and infrastructure,” Game and Fish added. “This year, zebra mussels were found in Pactola Reservoir in the Black Hills of South Dakota and Highline Lake near Loma, Colorado. These confirmations are the closest zebra mussels have been to Wyoming. To date, Game and Fish has not found zebra or quagga mussels in any of the state’s waters.”

Osterland added: “The threat of zebra mussels to Wyoming is real and impacts to our state and boaters will be big, if found.”

While Asian clams have been discovered in Glendo, Game and Fish said it is not implementing any changes to regulations for boaters or other water users in the area at this time.

The department said its watercraft inspections have been busy all summer and that inspectors have seen an increase in aquatic invasive species on boats statewide.

“We have been decontaminating each boat entering from South Dakota as well as any boats coming from a high-risk water,” Josh Leonard, AIS coordinator with Game and Fish, said. “We’re taking the movement of zebra mussels incredibly seriously. If they get into our state, they can spread — evident by what we see here with Asian clams.”

Any watercraft transporting into Wyoming between March 1 and Nov. 30 must undergo an inspection by an authorized inspector prior to launching on any water in Wyoming, Game and Fish said. Boats are also required to stop at invasive species check stations anytime they pass one.

“These stops are designed to stop the spread of AIS,” Leonard said. “It’s the law to stop — and it’s a small sacrifice of time to ensure the waters you like to visit remain AIS free and without restrictions for recreation.”

There are rapid response plans in place if zebra or quagga mussels are discovered in Wyoming’s highest-recreation waters, Game and Fish said. That would include things like the closing of boat ramps and mandatory inspections prior to boat launches.

“To see those plans and the most recent information on Wyoming AIS, visit the Game and Fish website,” the department said.