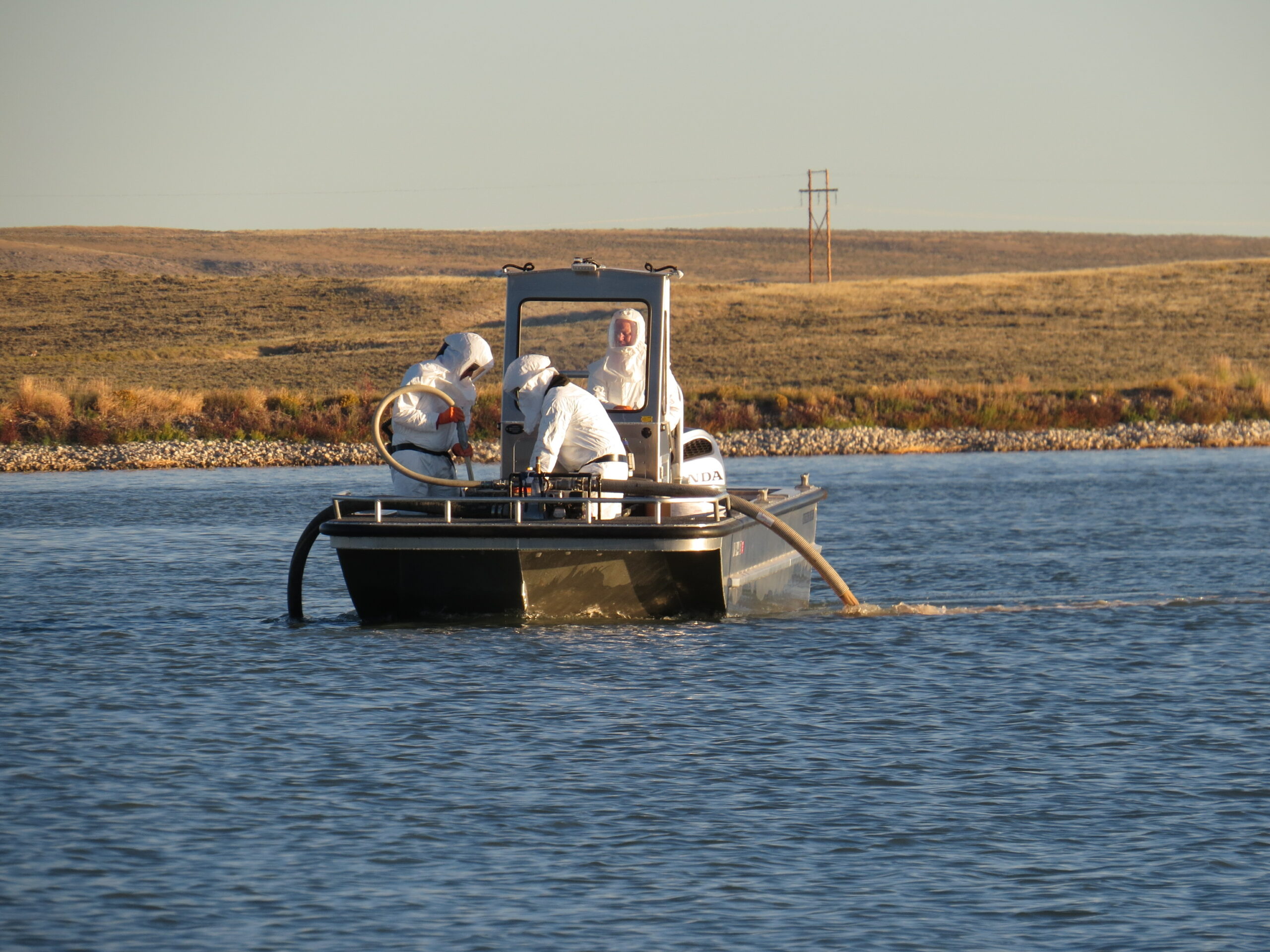 Saratoga Lake was treated with 14,000 pounds of rotenone in September. The operation killed all fish in order to get rid of illegally stocked yellow perch. (Wyoming Game and Fish)

The lake was treated with about 14,000 pounds of rotenone, a naturally occurring compound sometimes used to kill fish, insects or plants. The operation aimed to kill all the fish in the lake to ensure the yellow perch population was eradicated, and Game and Fish said on Monday that the operation was successful in achieving that aim.

Biologists sampled the lake twice during October and the rotenone project was determined to be complete after zero fish were caught in numerous gill nets after a 10-day period, Game and Fish said.

“It went well. We did not catch any fish, which is awesome,” Bobby Compton, Game and Fish Laramie Region Fisheries supervisor, said. “It means the project was a success.”

The success of the operation means Game and Fish won’t need to repeat it. The project cost almost $140,000 and 1,150 hours of labor, according to the department.

The project is estimated to have killed over 10,000 fish, according to Compton. About 10% of the fish were yellow perch, and there were more perch than Game and Fish had initially expected, Compton said. About 20% of the fish killed were trout and about 70% were white suckers, a species that competes with trout.

“It was a huge effort to pick up all the dead fish and dispose of them,” Compton said. “We estimate there were more than 10,000 fish, and about 70% were white suckers, with most of them 15 to 20 inches.

“Getting rid of the sucker population in Saratoga Lake is going to vastly improve the trout fishery for the near future. That was a lot of suckers taking up food that could have gone to trout.”

There were also invasive brook stickleback in the lake, Game and Fish said.

“Another benefit of the project is the removal of invasive brook stickleback, a small minnow native to central North America,” the release said. “Brook stickleback are spread as a result of bait introductions, accidental introductions with aquaculture species and through water currents.”

Game and Fish is planning to take steps to try and prevent white suckers and brook stickleback from getting back into the lake, according to Compton. Those species get into Saratoga Lake via the North Platte River.

“We’re looking at a screening solution to keep them from returning to the lake,” Compton said. “We hope to have a fish screen in place sometime this winter before the lake is refilled.”

The screening won’t be able to completely guarantee that white suckers and brook stickleback can’t get into the lake, but should slow population growth of those species, Game and Fish said.

“The goal is to stock 6,500 catchable (nine-inch) rainbow trout, 1,500 seven-inch brown trout, and 2,500 fingerling tiger trout,” Game and Fish said. “At three to six inches of growth per year, the brown trout will grow to catchable size by fall of 2023. There are also plans to add some larger broodstock trout in the fall of 2023 prior to the ice fishing derby.”

Game and Fish is still seeking information about the illegal introduction of yellow perch into Saratoga Lake.

“The Game and Fish Department encourages anyone with information regarding this illegal introduction of yellow perch to contact the Department (1-877-WGFD-TIP),” the department said. “Identities can remain confidential.”

Compton thanked the Town of Saratoga, the Bureau of Land Management, lakeside homeowners and others in the community who supported the project.

“They were very supportive throughout the entire process,” he said. “We could not have done this project without their cooperation.”