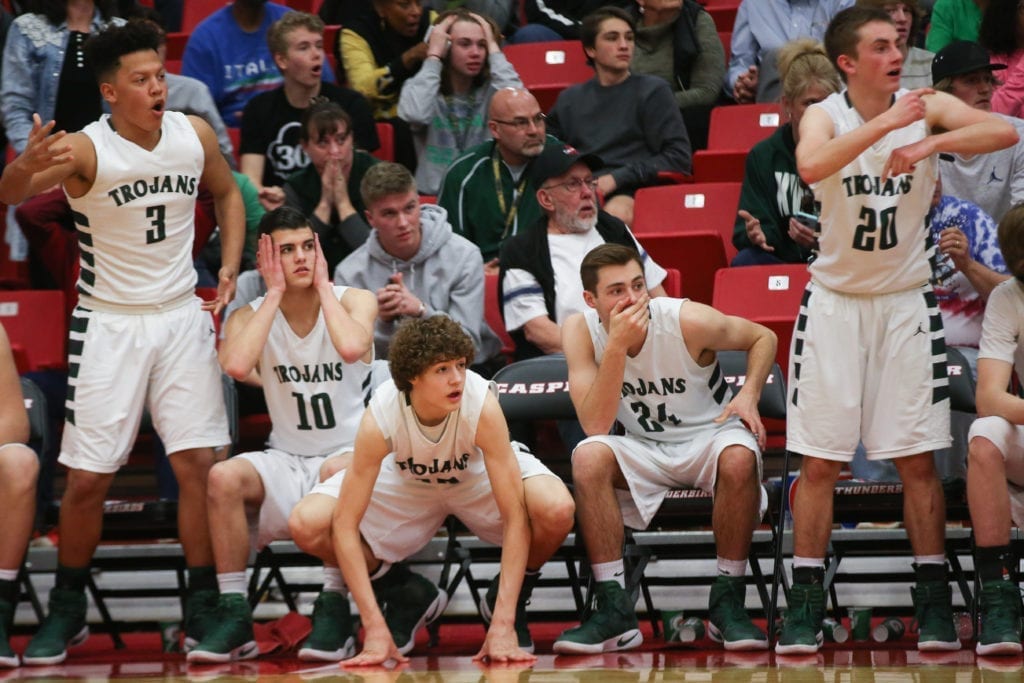 A mixture of emotions surface in the final thirty seconds of play on the Kelly Walsh bench in the game against Cheyenne Central during the WHSAA State Basketball quarterfinals on, Mar. 9, 2017, at the Casper College Erikson Thunderbird Gym.

In a nail-biting finish, Kelly Walsh won against Cheyenne Central, 39-34, in the quarter final round to advance in the Wyoming State Basketball Championship. Standout scoring from Cameron Carter (2) with ten points in the second half, and Jaxon Hiatt (11) with eleven points put the team in position to clench the win from Cheyenne Central. In the last thirty seconds it was anyone’s game until the Kelly Walsh boys pulled away to score the final five points, with two noteworthy free throws from Sam Marsh (5). The Trojans will take on Sheridan in the semi-finals at 7:30pm on Friday, March 10 at the Casper Events Center.

The Natrona boys could not rally with a win against Gillette, losing 77-55 and they are knocked out of the running for the state title. Teammates Jesse Harshman (2) and Brennan Hagar (30) both scored twenty points throughout the game in an attempt to keep the Mustangs afloat, but were outmatched by the Camels in the end. Natrona will play in the consolation bracket Friday, March 10th against Cheyenne East at 1:30pm in the Casper Events Center. Gillette will go on to play Rock Springs in the semi-finals of the Wyoming State Basketball Championship at 9pm, Friday at the Casper Events Center.