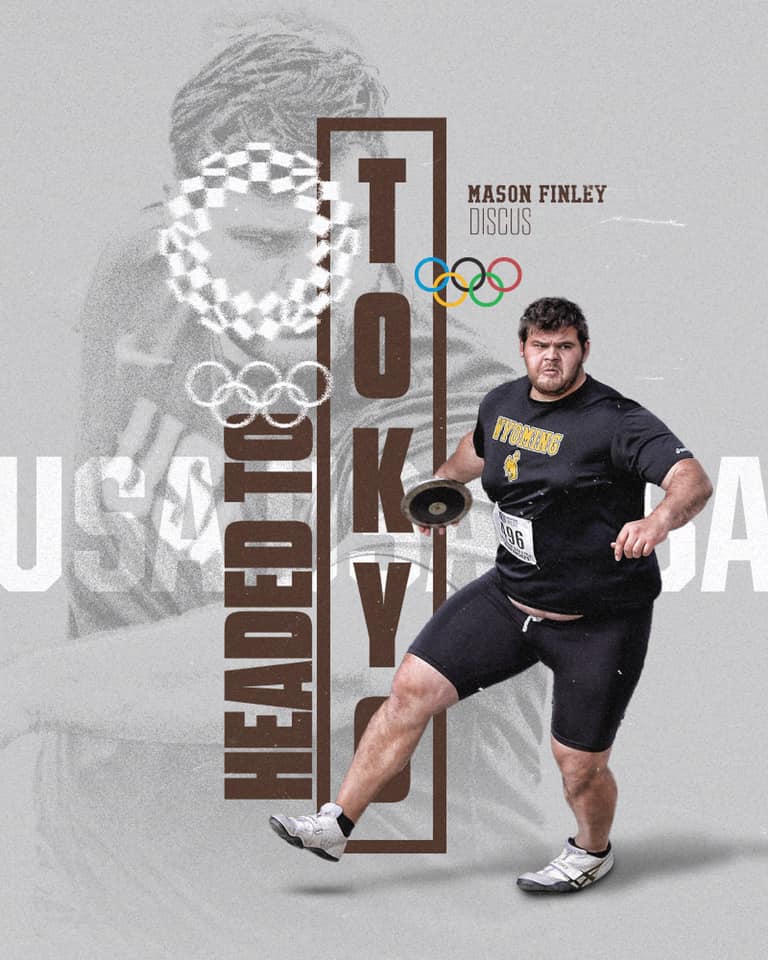 Finley earned the top spot on Team USA after a 63.07-meter discus toss during the final of the U.S. Olympic Team Trials Men’s Discus Throw on Friday, June 25 in Eugene, Oregon.

His 63.07-meter toss of the 4.4-pound discus equals 206.92 feet, a distance greater than Wyoming’s tallest building. While UW’s White Hall is often said to be the state’s tallest building, the Wyoming Financial Center in Cheyenne is actually taller at 148 feet (see note below).

Finley will be joined by Reggie Jagers and Sam Mattis in Tokyo on Team USA’s Discus Throw team.

His Team USA bio adds that he set a national high school discus throw record with a toss of 72.09 meters during a “High Altitude Challenge” in Alamosa, Colorado.

Finley won gold medals in both shot put and discus during the 2009 Pan American Junior Championships. His Team USA bio says that his favorite professional sports teams include the Kansas City Chiefs, the Denver Nuggets and the Kansas City Royals.

He graduated from UW with a degree in Theater in 2014. Finley was born in Kansas City on Oct. 7, 1990 but calls Chaffee County, Colorado home, according to his Team USA bio.

He is coached by Paul Barrett. Finley stands at 6’8″ tall and weighs 348 pounds.

“[A]ccording to Emporis, White Hall is estimated to be only 146.37 feet (44.614 m) tall, and according to the Council on Tall Buildings and Urban Habitat the Wyoming Financial Center (U.S Bank Building) is 148 feet (45 m) tall[79] and is thus the tallest building in Wyoming,[93] The Wyoming State Capitol Building, at 146 feet (45 m) (spire)[94] is only slightly shorter. The Jim Bridger Power Station in Point of Rocks has also been cited as being 24 stories tall and the tallest building in Wyoming[95] but this probably includes boilers and stacks, which are not regularly inhabited.[96]