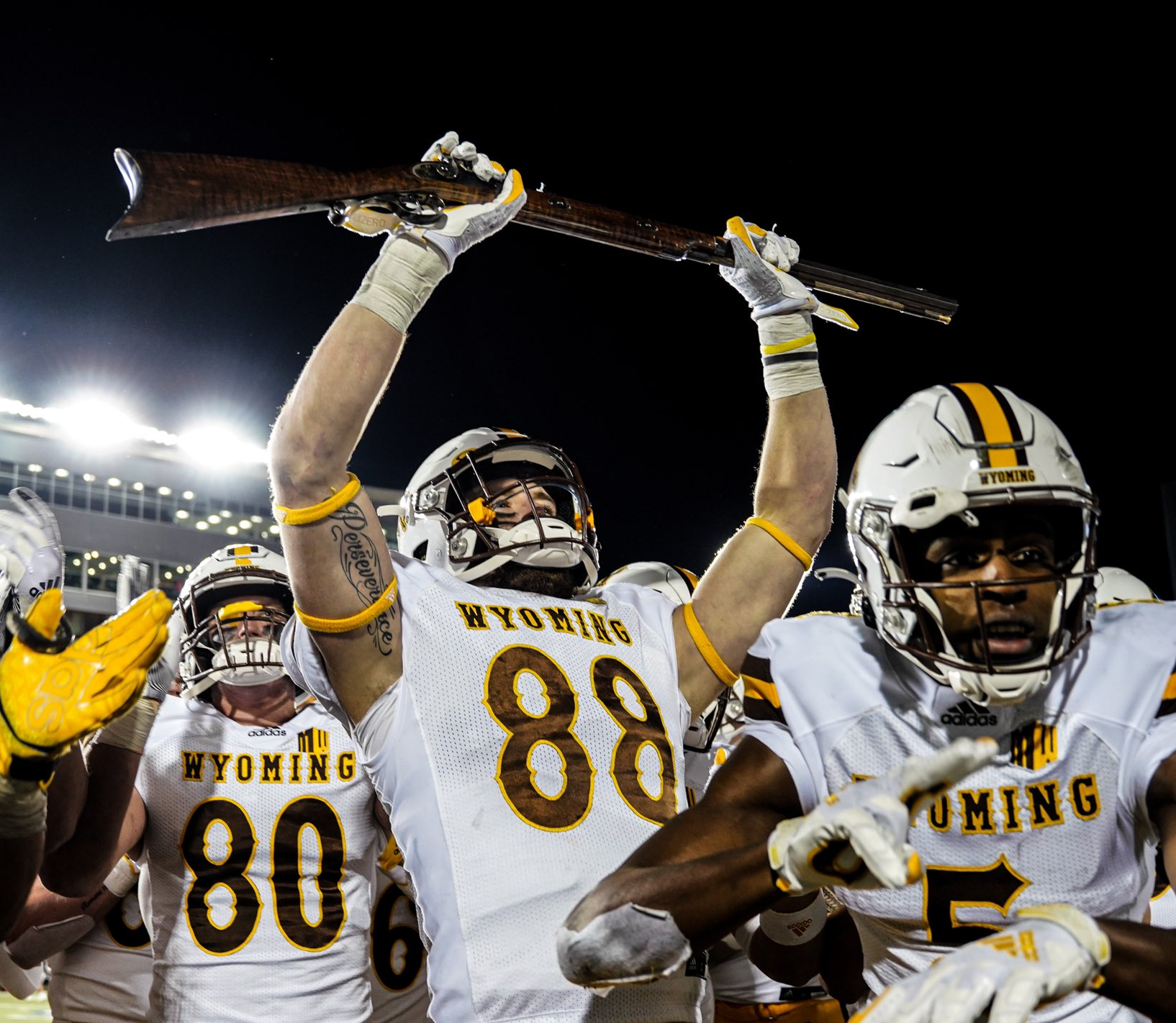 Were things smooth sailing at all times for Wyoming football this season? Absolutely not.

Nevertheless, the Cowboys and coach Craig Bohl did just enough to qualify for the postseason for the fourth time in six seasons.

Those hopes looked as if they were on the ropes for a while: After rocketing to a 4–0 start, the Pokes lost their next four games and needed key results late in the year to get to a bowl-eligible 6–6. Regardless, Bohl’s new distinction of being the first coach in school history to take the Cowboys to four bowls in his tenure can’t be taken away.

His reward is a tussle against Kent State in the Famous Idaho Potato Bowl at 1:30 p.m. Tuesday at Albertsons Stadium on Boise State’s campus in Boise, Idaho. The Pokes have never played the Golden Flashes in their history, but do have experience bullying the Mid-American Conference in this very bowl game.

What’ll be the game plans as Wyoming looks for its third straight bowl victory? Here are some things to watch out for as UW tries to earn another postseason win in the Gem State:

What are the betting lines?

Wyoming is favored at -3.5 (-160) and the over/under is at 59 as of Monday afternoon, per DraftKings Sportsbook.

Can the Cowboys contain Dustin Crum?

Wyoming’s passing defense this season has been, for the most part, spectacular. It also arguably hasn’t played a quarterbacking talent with the skills of Kent State’s Dustin Crum yet, either.

Flying under the radar on a middling mid-major school, Crum’s talent despite that has rocketed him up NFL Draft boards to where he could very well be a selection in the later rounds of April’s draft. The fifth-year senior is a dual-threat signal-caller with a good arm (2,941 yards, 16 touchdowns passing) and possibly even better mobility (633 yards, 11 touchdowns rushing) for a player that stands 6-foot-3 and weighs almost 210 pounds. With a career touchdown-to-interception ratio of over 4-to-1 (51 touchdowns, 12 interceptions), Crum isn’t the type of thrower to make many mistakes. Just ask Buffalo, which he torched for nearly 500 total yards (407 passing, 72 rushing) and five total touchdowns in a Golden Flashes win October 9.

The good news for the Cowboys is that the secondary is currently brimming with confidence. UW currently sits third in the country in passing defense (175.5 yards allowed per game) as cornerbacks coach Benny Boyd has elevated the Pokes’ unit from the depths of 101st in America two years ago before he arrived. Eight different players have an interception this season — three of which were returned for touchdowns — as few quarterbacks can consistently read the Cowboys’ coverage.

UW has a glaring defensive weakness, however, and that’s stopping the run. The Pokes allow almost the exact same amount of rushing yards per game (175.6) as they do passing yards, which has them sitting in the bottom third of the country in that category and often on their heels in games. Considering Kent State is among the nation’s best in running the football (243 yards per game), that could spell danger.

It may be difficult for Crum to get going as a passer Tuesday, but if he has time to operate and extend plays with his legs, it could be a long day.

The linebacker room in Laramie is quickly gaining steam if recent output is any indication.

When former Cowboy linebacker Logan Wilson was drafted by the Cincinnati Bengals in the third round of the 2020 NFL Draft, there was genuine wonder if there was a worthy replacement to fill in the immense gap left behind. Chad Muma ensured production from that spot didn’t miss a beat.

The senior from Colorado was the fourth-leading tackler in the country at the end of the regular season and named a finalist for the Butkus Award (given to the top linebacker in college football) on his way to a first-team All-Mountain West Conference and third-team All-America selection. His 78 solo tackles led the MWC, but he has some sticky hands, too: Muma intercepted three passes and took two of them back for touchdowns, one of just 11 players in America to have multiple pick-sixes.

Muma had an extra year of eligibility remaining thanks to an NCAA ruling following the pandemic-ravaged 2020 season, but he’s forgoing it to declare for this spring’s NFL Draft. At 6-foot-3 and 242 pounds, he stands at similar stature to Wilson, who is still the Bengals’ leading tackler this year despite missing the past two games due to a shoulder injury.

But before Muma attempts to continue an emerging trend of quality Pokes linebackers in the pros, he has one final game to play in Boise. Muma said it “was never really a question” that he’d play in a bowl if UW made one, and now that there’s postseason play upcoming, there’s another chance for him to shine in the brown and gold.

Wake up and run for the French fries

One of the quirkier games of the bowl season, the Famous Idaho Potato Bowl — known in its current iteration since 2011 — typically pairs together bowl-eligible teams from the MAC and MWC. In addition to Albertsons Stadium’s iconic blue turf, there’s a giant potato mascot that patrols the sidelines called “Spuddy Buddy” and a French fry bath for the winning coach. It gets pretty starchy in Boise.

But Bohl and the Cowboys have already been a part of the festivities once before. Wyoming won the 2017 version of the matchup against Central Michigan, with former Pokes and current Buffalo Bills star quarterback Josh Allen winning MVP in his final college game. UW dominated the night, winning 37–14 on the back of a 21-point first quarter that featured three Allen passing scores.

Passing the ball is probably not going to be high on Wyoming’s radar this time around. Quarterback has been a question mark for almost the entire season with Sean Chambers and Levi Williams splitting time under center, though Williams took on the reins through the latter parts of the regular season. When Wyoming runs the football effectively, however, that’s when it’s most dangerous on offense.

Senior tailback Xazavian Valladay should cross the 1,000-yard rushing barrier early Tuesday for the second time in his career after he was on pace for another one in the COVID-affected 2020 season. But Titus Swen (737 yards, seven touchdowns rushing) often teams with Valladay to provide a dynamic one-two rushing punch; the two combined for over 300 yards on the ground in the Cowboys’ 44–17 stomping at eventual MWC champions Utah State, one of the most surprising results on the league’s schedule this season.

If Wyoming can control the ground game on offense and prevent one from developing on defense, it’s likely that it’ll be in good shape for Bohl to hoist the second celebratory bowl of potatoes — yes, that’s the actual bowl trophy — of his career.