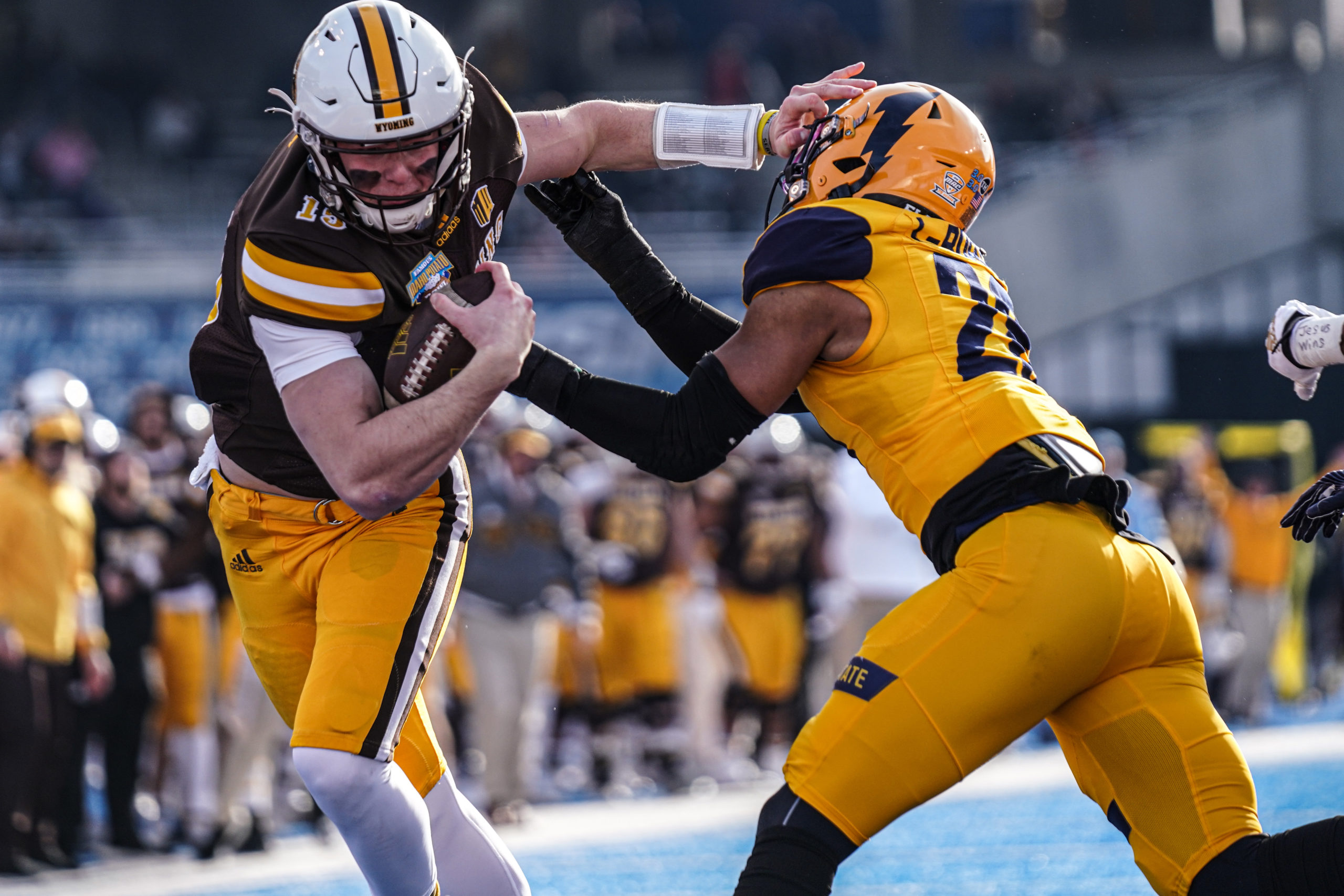 Wyoming quarterback Levi Williams stiff arms a Kent State defender during the Cowboys' 52-38 win over the Golden Flashes on Tuesday afternoon in the Famous Idaho Potato Bowl in Boise, Idaho. Williams became the first quarterback in bowl game history to run for 200 yards and four touchdowns in a single game as he was named the game's MVP. (Wyoming Athletics)

When the sophomore Texan is under center for the Cowboys in postseason play, he does something special. And on a record-setting day in UW’s 52-38 win over Kent State in the Famous Idaho Potato Bowl on Tuesday afternoon in Boise, Idaho, Williams’s legend in bowl games grew.

Two seasons after he threw for a then-career high 234 passing yards and had four total touchdowns (three passing, one rushing) in a 2019 Arizona Bowl win over Georgia State, Williams scampered for a career-best 200 yards and four rushing touchdowns — along with 127 yards and a touchdown through the air — in the best game of his Cowboys career on the blue turf at Albertsons Stadium, the home of Boise State.

Williams became the first quarterback in bowl history (yes, every single bowl ever) to rush for over 200 yards and four rushing touchdowns in a single game, making him an obvious choice for the Famous Idaho Potato Bowl’s MVP award. It was ironically a Josh Allen–esque game as the UW great won the MVP award himself in the same bowl game five seasons ago.

Twice in his career, Williams has been a backup at a point in the season prior to leading Wyoming to a bowl victory. As he heads into his fourth season in Laramie next fall, he may have earned enough respect Tuesday to not be in that position again.

“It’s really awesome,” Williams said. “It’s about not quitting and knowing your role and I feel like I played my role pretty well. … We knew we had it in us, and this week it was preparing and we had an option: We could either roll over and feel sorry for ourselves, especially after the loss against Hawaii, or we could come out to play. We knew we had to face adversity, and we did.”

Williams was the star of the show, but he didn’t even account for half of UW’s total rushing yards (404). Tailback Xazavian Valladay went for 79 yards and a score on the ground, while Trey Smith scampered for 73 yards and a touchdown in both players’ final collegiate games. Junior Titus Swen, almost certainly the workhorse back next season with Valladay’s graduation, pitched in with 48 yards on eight carries.

“I think during the course of that [stretch], they were able to figure out some things upstairs on how they were playing,” Bohl said of the offense’s early-game struggles. “We got thrown a little bit of a curveball, and then I thought our players just did a really great job adapting.”

Crum answered with a passing score right before half to put KSU ahead going into the break, but 21 unanswered second-half Wyoming points — and a lead it would never relinquish — followed en route to Bohl getting the game’s iconic yet quirky French fry bath just before the final siren sounded. Long second-half scores by Williams (80 yards) and Smith (49 yards) just sealed the deal even earlier.

Bohl enters his ninth season at the helm of the Cowboys in 2022 and has a core coming off a season-capping bowl victory to depend on, albeit missing a couple pieces such as All-Mountain West Conference linebacker Chad Muma, who played his final college game as he declared for the NFL Draft.

Nevertheless, for how excited Bohl was to talk about what’s coming, especially as a man who knew perennial success at North Dakota State before going to Wyoming, there looks to be few worries in the UW camp.

“We accepted the challenge,” Bohl said. “I want to wish Kent State the best; I think they’ve got a really good program and they’re going to win a lot of games in the future. But I can tell you, the future looks really bright for Cowboy football as well. … We’re really excited about coming up with another win.”