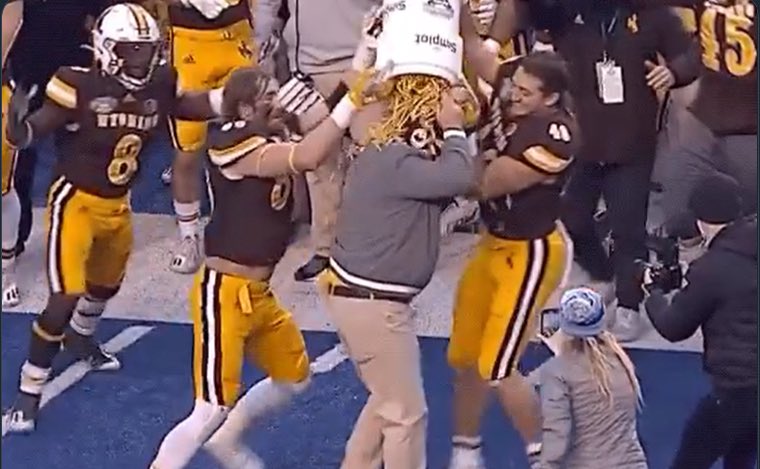 Wyoming football coach Craig Bohl has a cooler of french fries dumped on his head in celebration of the Cowboys' 52-38 win over Kent State on Tuesday in the Famous Idaho Potato Bowl in Boise, Idaho. (Twitter)

It’s customary after big victories in football for the winning coach to get an ice-cold bath of Gatorade from the players’ cooler.

Getting a celebratory dumping of crinkle-cut French fries instead? That’s a bit more unusual.

Sure enough, that’s the fate Wyoming football coach Craig Bohl endured when his Cowboys beat Kent State 52–38 on Tuesday in the Famous Idaho Potato Bowl in Boise, Idaho for his third bowl victory in five seasons.

The French fry bath has been a staple the past few seasons of the Famous Idaho Potato Bowl, obviously paying homage to what the game is sponsored by. Despite having won the game twice — Wyoming won the 2017 version of the bowl, as well — Bohl didn’t have the taters dumped on his head when the Pokes beat Central Michigan with current Buffalo Bills star Josh Allen at quarterback five seasons ago.

But when the Cowboys knew victory was in sight, his players knew that Bohl had to get the sweet — or perhaps salty? — taste of victory.