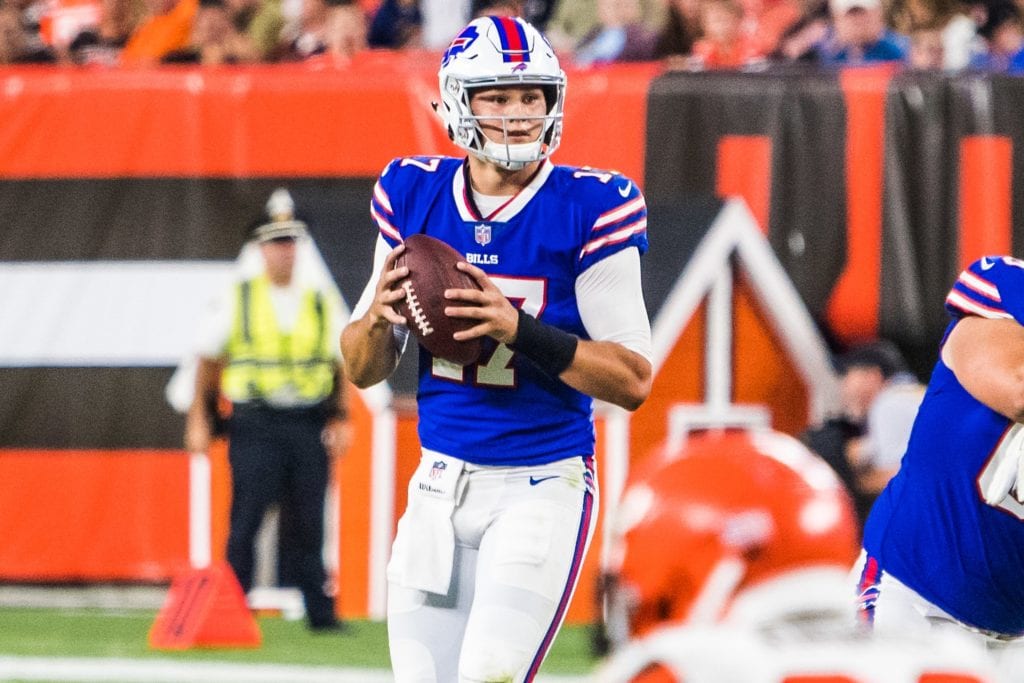 How did Allen respond to getting controversially snubbed from the Pro Bowl roster? By putting up — considering the circumstances — what may be his best performance of the season in a win at the New England Patriots this past weekend.

With first place in the AFC East and comfort in the playoff race on the line, Allen stormed into Foxboro and put on a show, throwing for 314 yards and three touchdowns (plus 64 rushing yards) in the Bills’ 33–21 win. He connected for scores with wide receiver Isaiah McKenzie in the first quarter and Pro Bowler Stefon Diggs in the second, then orchestrated a long fourth-quarter drive that ended in a touchdown to tight end Dawson Knox with 2:30 left that put Buffalo up by two scores.

It was sweet revenge for the Bills after losing 14–10 to the Patriots three weeks ago on a windy night in Buffalo and puts them in the driver’s seat in the AFC playoff picture. Currently seeded fourth as the AFC East leaders, Buffalo can clinch a playoff spot in Week 17 with a win over the Atlanta Falcons and a loss from either the Baltimore Ravens or both the Los Angeles Chargers and the Las Vegas Raiders.

Another week, another game in which Wilson was sidelined with a shoulder injury he suffered at the hands of the Los Angeles Chargers on December 5. Fortunately for him, the Bengals have been playing well during his recovery, punctuated by quarterback Joe Burrow’s 525-yard passing outburst in a win against the Ravens on Sunday.

That victory against an AFC North rival was big for Cincinnati’s postseason aspirations as a win in either of its final two games (against the Kansas City Chiefs or at the Cleveland Browns) will clinch the Bengals their first division crown in six years. That could also mean a late return for the former Cowboy and Mustang, though likely not this week: Bengals coach Zac Taylor said Monday that Wilson is “very doubtful” to play against the Chiefs.

Epps had not one, but two games in the Pro Sports Report’s timeframe this week. COVID-19 issues for both the Eagles and the Washington Football Team meant a postponement and a rare Tuesday night matchup last week, in which Philadelphia won 27–17 with Epps recording three total tackles.

Just five days later, the Eagles suited up again for their Week 16 matchup against the New York Giants, being unphased by the short turnaround in a 34–10 rout where Epps again had three tackles to go with a pass breakup. Philly’s three-game winning streak has shoehorned it into the NFC Wild Card picture, leaving it as the No. 7 seed with two games to play and controlling its own destiny.

It’s unfortunate that Wingard plays on probably the NFL’s most hapless franchise at the moment, because he’s been a consistent piece on a very bad Jacksonville defense. Wingard again had a solid showing for the Jags with five tackles against the New York Jets on Sunday — his sixth straight game reaching that number — but it was again for naught as Jacksonville lost to New York to drop its seventh straight game.

But Wingard was able to stake a claim that he helped out Jacksonville on the offensive side of the ball, too. On the Jags’ first drive of the game on 4th-and-2 from their own 33-yard line, Wingard got a direct snap on a fake punt and was able to get across the first down marker for four yards, setting up what would later be a field goal from Jacksonville kicker Matthew Wright.

Gipson has missed Chicago’s last two games while being on the team’s reserve/COVID-19 list, but was activated from the list Monday following the Bears’ 25–24 win over the Seattle Seahawks this past weekend. Barring any setbacks, the veteran should suit up for his team’s matchup against the Giants in Week 17, having started every game he’s been healthy.

Bryan played just 10 defensive snaps and recorded no stats in the Jaguars’ loss to the Jets, his first time not appearing on the stat sheet since Week 6. As Jacksonville’s season at 2–13 overall is long over, look for the former Mustang to possibly rotate into the lineup at times during the season’s final two weeks.

The Saints have been one of the teams most decimated by the recent COVID-19 outbreak affecting the league, missing 22 players and four coaches for their Monday night loss to the Miami Dolphins. Granderson was one of the many names on New Orleans’ reserve/COVID-19 list, with an NFC South matchup against the Carolina Panthers on Sunday his next possible chance to return — if the former Poke can get off the list in time.

It’s been an up-and-down week for Purcell, a veteran in his sixth NFL season. On one hand, the former Poke had a big moment in the Broncos’ eventual loss to the Raiders on Sunday, recovering a fumble in Las Vegas territory with two minutes left in the first half — a play that eventually led to a Denver field goal. Though that turnover was undoubtedly the highlight of Purcell’s day, he finished with three tackles on 36 defensive snaps as well.

However, the jubilations were short-lived as the Broncos announced Monday that they were putting Purcell on their reserve/COVID-19 list. Under the league’s updated COVID protocols, Purcell can “test out” of the list if vaccinated, though updated CDC guidelines released Monday that recommend shortening isolation periods from 10 to five days could mean a further update in protocols from the league.

After playing his first snaps in nine weeks against the Houston Texans in Week 15, Hollister became a larger part of the Jags’ passing attack in Week 16 against the Jets, catching both of his targets for 20 yards in Jacksonville’s loss.

Interim coach Darrell Bevell seems to like what he sees from the former Cowboy as Hollister has played a combined 56 offensive snaps in the past two games, both of which came after controversial former coach Urban Meyer was fired December 16.

Hill was promoted to the active roster prior to San Francisco’s Thursday night game against the Tennessee Titans after being signed to the practice squad earlier in the month. He’s currently fourth on the depth chart at running back behind Elijah Mitchell, Jeff Wilson Jr. and JaMycal Hasty, but did play 15 special teams snaps in the loss to the Titans.

Bobenmoyer’s role on the Broncos is limited to a few plays per game — his position dictates that — but the Cheyenne native is holding his own as one of the NFL’s youngest long snappers for punter Sam Martin and kicker Brandon McManus. He played nine special teams snaps against the Raiders in Las Vegas this past weekend.

Johnson sat three games as the Nets had to control a COVID-19 outbreak on the roster, which ended up sidelining 13 total players as stars Kevin Durant and Kyrie Irving still remain in health and safety protocols as of Tuesday morning. However, the former Thunderbird returned for the Nets’ game against the Los Angeles Lakers on Christmas Day, playing almost 25 minutes as he scored eight points and corralled four rebounds.

Despite Brooklyn’s issues, the 34-year-old veteran forward has been a key piece in the Nets winning six of their last seven games, including their last one, a 16-point win over the Los Angeles Clippers on Monday in which he tallied four points but brought down eight rebounds with it.

Portland has been in a tough stretch lately, but the same can’t be said for Nance, who has now started the Trail Blazers’ last seven games. In fact, he’s scored in double figures for three of the last four games, a 2–2 stretch for Portland after it lost seven straight matchups prior.

Nance is clearly becoming a more integral part of what the Blazers do as his 11 shots in a Monday loss against the Dallas Mavericks were his most in a game this season. The former Cowboy is currently averaging 6.6 points and 5.6 rebounds per night for coach Chauncey Billups’s team.