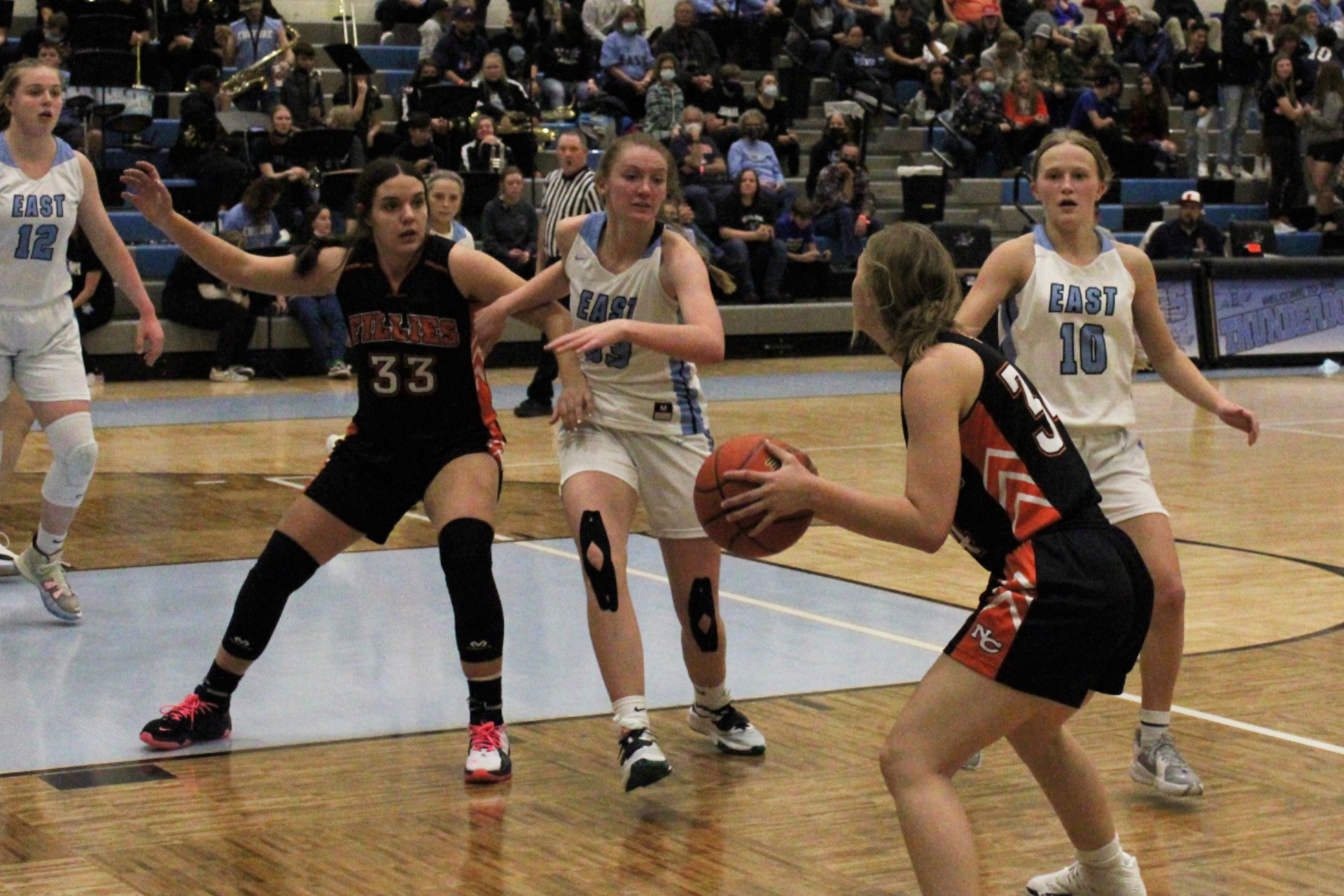 CHEYENNE, Wyo. — You could throw about every cheesy moniker under the sun to describe the hype leading up to the Cheyenne East vs. Natrona County girls basketball showdown Friday night at East High School.

State tournament preview. Unbeaten vs. unbeaten. And with 11 total state championships between the two storied programs, it rarely gets better in Wyoming high school girls basketball.

So it came as a shock when the Thunderbirds didn’t even make it competitive.

The defending Class 4A champions pulled off a stunning 69–38 win over the Fillies on its home floor in each team’s second game of the day at the Taco John’s Invite, pulling off a statement victory in style as East likely made itself the newly-crowned team to beat in the state.

With many on the team having held prior silverware from the previous year, Thunderbirds (9–0) coach Eric Westling knows how comfortable his teams are under pressure. But Friday night was another level of dominance, especially against a program that suffered just its fifth loss in two seasons.

“We’ve got a lot of kids that had been in big games, and we know how huge that is,” Westling said. “But we always talk about little-to-big: You do little things, then the big runs will happen.”

Sure enough, a lot of the little things — such as turnovers — added up for the Fillies (7–1) in a hurry.

Perhaps the night’s tone was set for good when East turned steals into layups on Natrona’s first two possessions of the game, because the Fillies were staring down a 23–5 deficit after the first quarter and 43–18 at half after coughing the ball up 11 times.

Meanwhile for the Thunderbirds, their newest face in the lineup was one of the main reasons why they were able to kick into high gear. Senior guard Jordan Jones, who spent her first two years of high school at crosstown rival Central followed by a year in Colorado, led all scorers with 21 points as a shiny new piece to an already-loaded East roster.

And after speaking with her after Friday night’s win, it’s safe to say she likes what she sees.

“Seeing our potential from the beginning, seeing what our great moments [are and] what we can do in games and even in practices, just shows us that we’re not even close to our ceiling of potential,” Jones said. “It just raises our confidence every game.”

East just passed its most daunting test of the season thus far with flying colors and should now be large favorites to repeat in 4A with Jones, two returning all-staters in guards Bradie Schlabs and Boden Liljedahl plus every win this year coming by 20 points or more.

Well, Natrona could very easily be an opponent the T-Birds see again come March, and the Fillies won nine straight games leading up to the state tournament rounds in 2020-21 — the point being Natrona could be a lot better once the season progresses.

Or East could just be too stout for anyone to hold a candle to. Time will tell.

“I think it’s our girls buying in,” Westling said. “I think that’s what’s made our program what it is, is a bunch of kids that want to play together and be a group. And I think that showed up again tonight.”