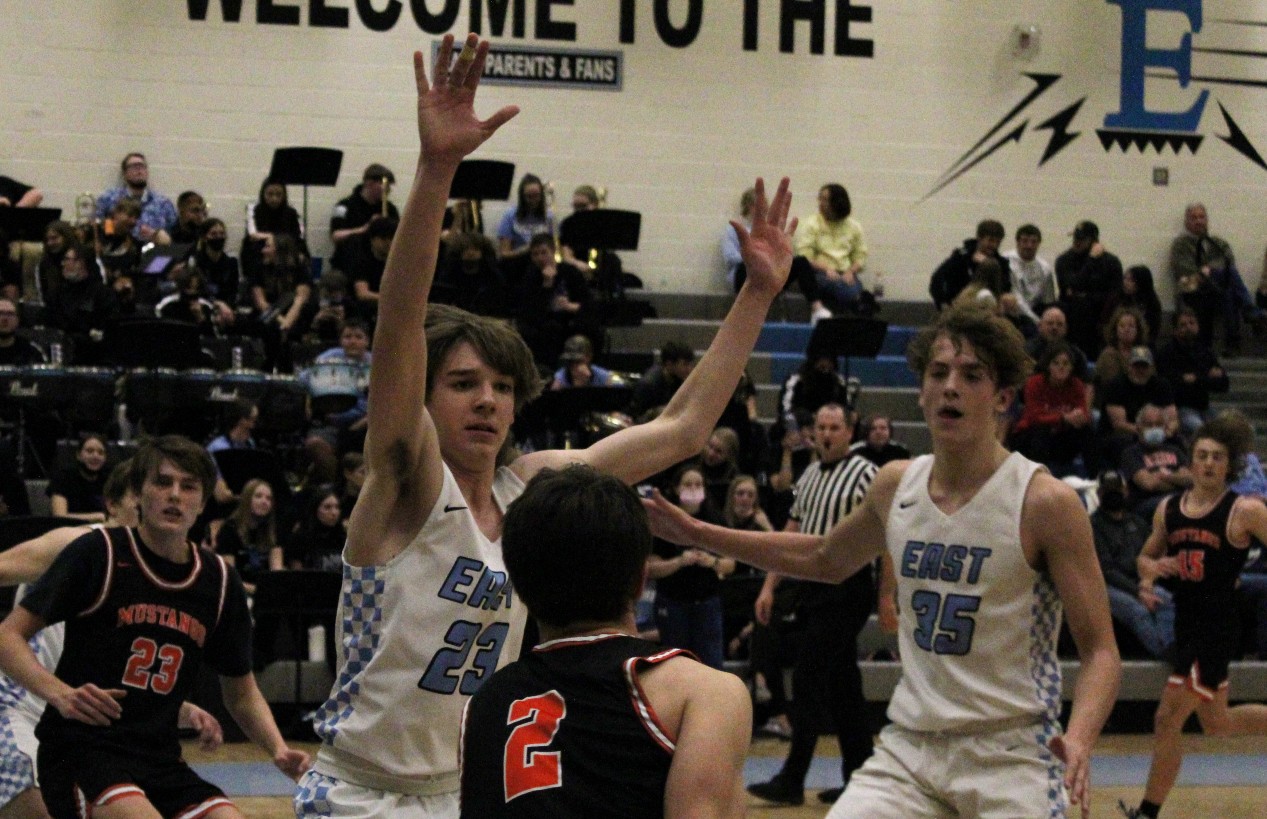 Sure, against Natrona County in the Taco John’s Invite at East High School in each teams’ second matchup of the day, the Thunderbirds had undoubtedly been running the Mustangs ragged for at least 16 minutes. East held a 26–6 lead at halftime, got up by as much as 23 and didn’t let Natrona score for nearly the whole length of a quarter between the second and third frames.

But the Mustangs slimmed the lead down to single digits, chipping away with bucket after bucket, and there was suddenly a sense of danger in the air. Leave it to a sophomore to calm some nerves.

East guard Drew Jackson showed poise beyond his years with a game-high 18 points, including four timely free throw makes in the fourth quarter, to help his team knock off Natrona 51–42 after a second-half surge from the Mustangs made things interesting down the stretch.

There were plenty of discussions in the East locker room about how things could’ve and maybe should’ve been handled differently, especially judging by the amount of time (roughly 20 minutes) the coaches spent with players postgame before leaving. But it was that stellar first-half display that propelled the T-Birds (8–1) to another positive result on what’s been a quality start to the season. Yet there’s also some urgency to not play with fire too often.

“I think in the first half we just capitalized and executed so well,” East assistant coach Paul Garcia said (head coach Rusty Horsley referred to Garcia to speak with Oil City/Cap City). “We paid … greater attention to the details and all the little things [like] hitting cuts, making extra passes, boxing out — and then we just got really impatient.”

Indeed, East was getting pretty much whatever it wanted on either end of the floor in the first half Friday night. Natrona looked frustrated on offense for much of the first two quarters, clearly off-kilter both by the T-Birds’ good defensive rotations and by not making shots it usually makes as a solid 3-point shooting team.

Then when the Mustangs were missing, East often got out and ran with the rebounds for transition buckets, building the lead piece by piece throughout the half. In fact, the T-Birds didn’t sink a single triple in the first two quarters and only shot two free throws, making a killing on close-range, high-percentage looks.

“I think maybe [with] the speed, there were some leakouts and runouts,” Garcia said. “But I think at half, they obviously regrouped and found quite a bit of answers to that.”

Natrona finally got some shots to go down after half, scoring 19 points in the third quarter with a pair of 3-pointers from 6-foot-5 junior sharpshooter Jackson Dutcher. The Mustangs looked most dangerous after dicing the deficit down to nine points with 5:34 left to play in the game, but the T-Birds kept their foes at bay and only allowed Natrona to cut the lead to as low as seven the rest of the way.

The steady hand of East’s sophomore guard helped, and he sounded worry-free when asked if the nerves of being a sophomore playing significant minutes in Wyoming’s biggest classification gets to him.

If the keep-it-cool approach can work for Jackson, it could work for East as it aims for a deep state run — and high-pressure scenarios — later in the season.

“Last year, I got a little varsity-level experience,” Jackson said, wearing a jersey of New York Knicks star RJ Barrett out of the locker room. “I don’t know, basketball’s my favorite sport; I just love playing it, so I don’t really think about it as being a varsity game. I just go out there and want to play [and] just have fun, honestly.”