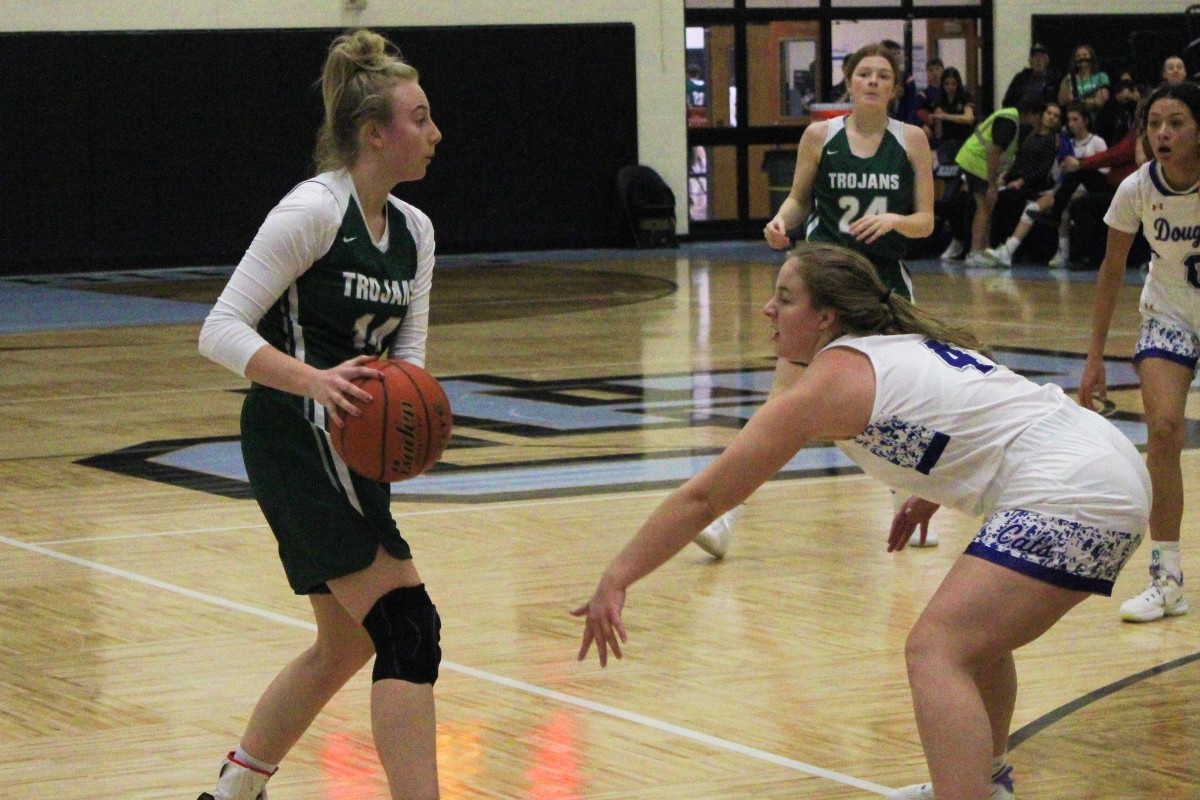 Over two full years have passed since Douglas girls basketball last lost a game, posting the longest winning streak from a girls basketball program in Wyoming high school history — 48 games — in the process. Approaching the all-time boys and girls record (set by Pine Bluffs’ boys team from 2015-17), the Bearcats could be forgiven for quite literally forgetting how to lose, as it’s been that long.

Kelly Walsh stunned the three-time defending Class 3A state champions with a 67–57 win Saturday afternoon in the Taco John’s Invite at Cheyenne East High School, leaving the Bearcats with a L on their résumé for the first time since Jan. 3, 2020.

The Trojans (6–3) led almost the entire game and seemed rather subdued in their celebrations at the final buzzer despite upending one of the state’s prep powerhouses in the sport. It turned out that Douglas’ (8–1) record wasn’t something on the minds of many Kelly Walsh players Saturday, which — judging by the result — turned out to be a pretty good thing.

“There was only one girl, I think, in the locker room that knew of that number,” Kelly Walsh coach Sara Tuomi said. “So it was not something we discussed. We just needed to focus on ourselves and do our job. I talked to them before the game [about how Douglas] is a disciplined, well-coached team. They know how to win, obviously, and we had to do our jobs on both ends of the court if we wanted to win.”

For the past four seasons, Douglas had one of the most dominant players in state history — 6-foot-4 center Allyson Fertig — patrolling the middle as a four-time all-state nod and two-time Gatorade Player of the Year. The Bearcats had/have many great players outside of her (like guards Allison and Lauren Olsen, who combined for 44 of Douglas’ points Saturday), but the Trojans clearly took advantage of their opponent’s sudden lack of height.

Swaths of rebounds fell Kelly Walsh’s way, many of which were turned the other way for transition buckets or right back up toward the rim as offensive boards. That iron grip on the rebounding battle was one of the main keys to victory that Tuomi cited, especially in the second half as her team grew a six-point halftime lead to as much as 14.

“We converted those [rebounds]; that was super helpful,” Tuomi said. “I think that third quarter, they kind of went a little cold there, and we were able to get some defensive rebounds and convert some of those. And that helped us build that lead in that third quarter.”

Clearly sensing its streak on life support down double digits in the fourth quarter, Douglas instituted a defensive press to attempt to create turnovers while trying to expose Kelly Walsh’s foul trouble. The Trojans had seven players finish with three fouls or more and five with four or more, forcing them to play a bit more cautiously even as the Bearcats cut the lead to as low as six in the final quarter.

But Kelly Walsh stayed cool, calm and collected down the stretch, scoring 24 points in the final eight minutes to keep Douglas at arm’s distance, including going 13 for 14 from the free throw line in the fourth. Trojans guard Peyton Carruth was a big part of the all-around effort, finishing with a team-high 19 points.

“I think that coming into the game, we knew everyone has to work together,” Carruth said. “And I think this team has something that a lot of teams don’t have: we can all work together and we all want it with each other instead of just for one person.”

When Kelly Walsh confides with each other, good things like snapping historic steaks happen. It also makes Tuomi’s life as a coach a little easier, even if a little bit of adversity made things a bit hairy at times.

“It was real nice, takes a little bit of stress off of me as a coach having so many in foul trouble,” Tuomi said. “I didn’t really have anyone next up to go because we’re all kind of in the boat of four fouls, three fouls. So it was good to get a collective team win.”