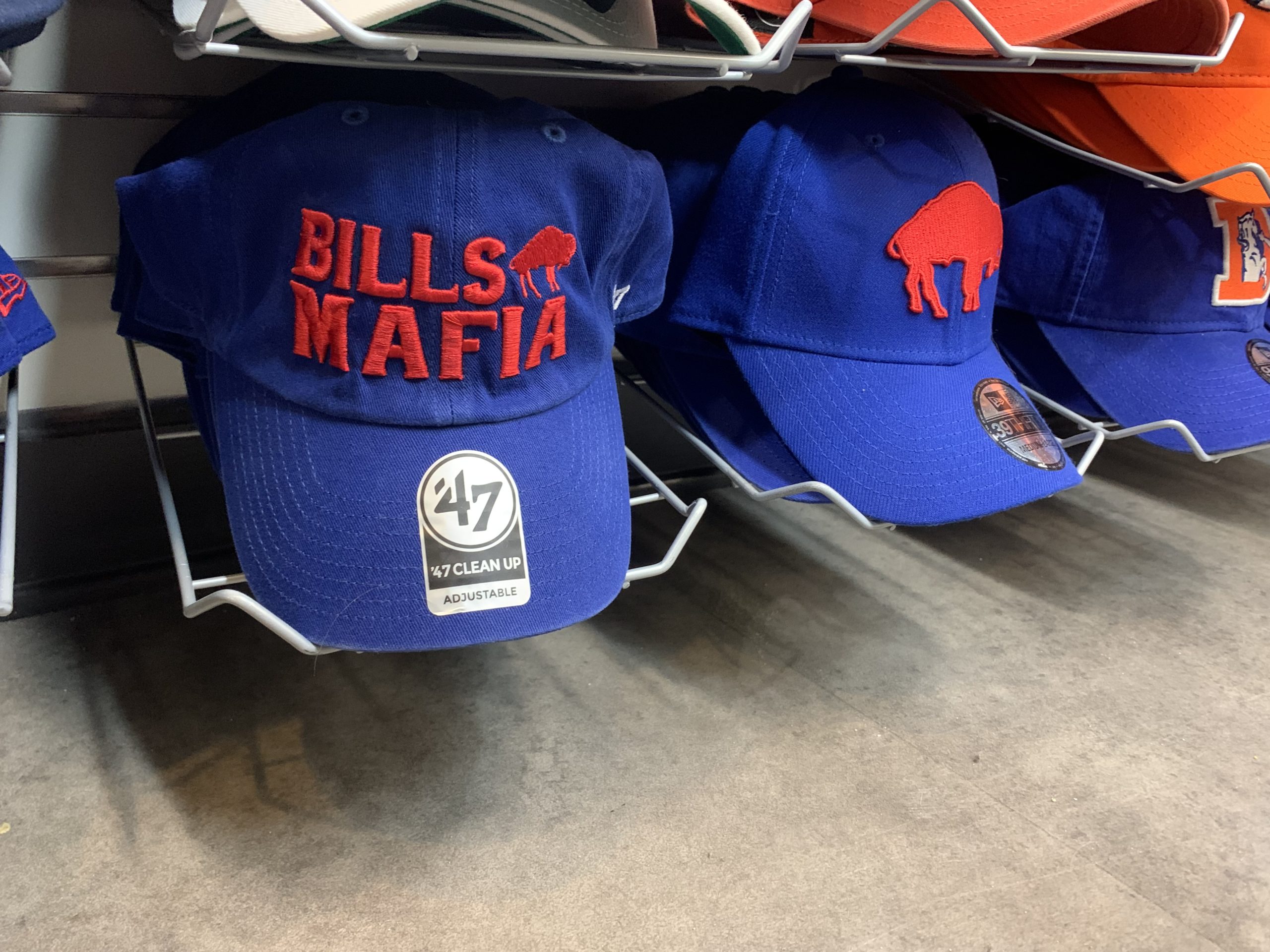 Buffalo Bills hats sit on a rack Thursday afternoon at Pro Image Sports inside Frontier Mall in Cheyenne. Since former UW quarterback Josh Allen was drafted to the Bills in 2018, many residents of the Cowboy State have found themselves joining the Bills fanbase colloquially known as "Bills Mafia." (Briar Napier/Cap City News)

CHEYENNE, Wyo. — Like most lifelong Buffalo Bills fans, despair is just part of the game for Casper resident Cathy Cywinski.

Bills loyalists like herself are used to reveling in their team’s misery; she’s lived (and suffered) through many dubious moments in the franchise’s history. There were the four straight Super Bowl losses in the 1980s (including kicker Scott Norwood’s “Wide Right” miss at the end of Super Bowl XXV) and being on the wrong side of the Tennessee Titans’ “Music City Miracle” during the 1999-2000 playoffs. Then there was not making the postseason after that for 17 years, a brutal drought that included a losing season every year from 2005 to 2013.

“We’re just waiting for whatever is going to happen to break our hearts again,” Cywinski joked. “It’s just what happens. You get used to it, and then it’s just sort of funny.”

Cywinski’s love of the Bills came from her Buffalo-raised parents, particularly her father, and strengthened as the family moved to Wyoming when she was a girl. She’s also a two-time University of Wyoming alum and fan of the Cowboys’ football team, so when former star UW quarterback Josh Allen starting lighting up opponents and catapulting his way up NFL Draft boards several years, it got her attention.

Then when the 2018 NFL Draft came around — and Allen was selected as the No. 7 overall pick by her beloved Bills — her two fandoms collided.

“I usually don’t watch the draft, but I was watching it to kind of see where he was going to go,” Cywinski said. “I thought for sure he was going to Denver. I thought, ‘Well, that’s OK. I don’t mind that, I can cheer for Denver and now I can cheer for him.’ And when they said the Buffalo Bills, it was so great. I probably got 30 texts that night from people saying, ‘Oh my God, You must be so happy.'”

It’s safe to say she doesn’t feel as alone as a Bills fan in Wyoming anymore.

Wyoming-connected professional sports stars don’t come around often, especially in a league that gets as much media and fan attention year-round as the NFL. So when someone connected to the Cowboy State puts it on the map, its residents notice.

Since Allen came into the NFL, the signal-caller has evolved into one of the game’s elite quarterbacks. A dual-threat passer who can do damage with his arm or his legs, Allen finished second in the league this year — only behind likely the greatest-ever player in NFL history, the Tampa Bay Buccaneers’ Tom Brady — in total touchdowns with 42.

Allen’s resonated so much with some Wyoming NFL fans, in fact, that some have spurned allegiances to other teams in favor of joining “Bills Mafia” (a colloquial name for Bills supporters) just because of the former Poke’s emerging superstardom.

“I’m a shareholding [Green Bay] Packers fan. I grew up a Brett Favre fan,” said Jared Christopherson, a dentist and UW alum based in Cheyenne. “But when Josh was drafted, I just found myself following the Bills a lot more than I was following the Packers. … As he’s gotten better and stuff and he’s a quarterback I saw play over in Laramie [at UW], I mean, if they both go to the Super Bowl, I’d want the Bills to win.”

Some fans haven’t just watched the Bills on TV because of Josh, but flown thousands of miles to check out the former Cowboy in person.

Casper residents and brothers Jerad and Brian Stack went to Jacksonville, Florida to watch the Bills play the Jaguars on November 7, a matchup that featured a plethora of UW alums including Allen along with Jags safety Andrew Wingard and tight end Jacob Hollister, plus Natrona County High School alum/Jacksonville defensive lineman Taven Bryan. By his admission, there was “a decent amount” of UW brown and gold flooding TIAA Bank Field in Jacksonville that day, with Allen the obvious main attraction.

Many Wyoming-based Bills fans spoken to for this story found it easy to relate their home state to Buffalo. After all, Wyoming’s state flag is red, white and blue — Bills colors — and has a giant bison plastered in the middle. Also, games at Highmark Stadium in Orchard Park, New York (where the Bills play) can get brutishly cold and windy in the winter, not unlike many parts of the Cowboy State.

“The Bills are pretty easy to like,” Jerad Stack said. “They kind of have a little Wyoming mentality, a little chip on their shoulder. Their fans are awesome, they’re a cold-weather team, stuff like that. But I mean, the truth is, it’s mainly because of Josh. … He fell into a great place.”

Allen-influenced Bills fans across Wyoming can be found across all ages.

Ben Swanson, a 13-year-old from Casper, got into the Bills during the 2020 season when Allen was earning shouts for the NFL’s MVP award after leading the team to a 13–3 season, the Bills’ best record since 1991. His mother, Becky, found Allen easy to like after she encountered a story about Allen’s charity work with a child that had gone through brain surgery — just like her son had at four months old.

“That surgery resulted in [Ben] having right-side paralysis, just like this kiddo that Josh did his story with,” Becky said. “There was just some similarity there, and it kind of just showed what a good guy Josh is. He’s got a way about him and he likes to pay it forward and do special things for kids and that kind of stuff. It just resonated with us, I guess you’d say, and just reinforced our fandom for Josh Allen.”

Allen helped take the Bills to their third straight playoff appearance this season, where at 6:15 p.m. Saturday he and Buffalo will host a hated AFC East rival, the New England Patriots, in the conference’s Wild Card round. It’s the first time since the Bills’ four consecutive Super Bowl losses from 1990-93 that the team has strung together that many playoff appearances in a row, giving much optimism to longtime fans like Cywinski.

But one person who won’t be there to witness possible history with her is the original start of her fandom: her father. After his passing in July 2020, Bills games have been a therapeutic way for Cywinski to remember her dad, an experience that she’s shared and spread to her nieces as the Wyoming connection with Allen grows more prominent.

And if the Bills were to finally erase the demons of season’s past and clinch their first-ever Lombardi Trophy, Cywinski would immediately think of the one that helped make years of Bills disappointment all worth it.

“It would be the best,” Cywinski said. “It would be the perfect way to remember my dad. … It’s been a struggle [being a Bills fan]; it was the 90s the last time they looked this good. From before I graduated high school until now, and now showing my nieces [games], it would just mean everything. It would be the best thing ever.”