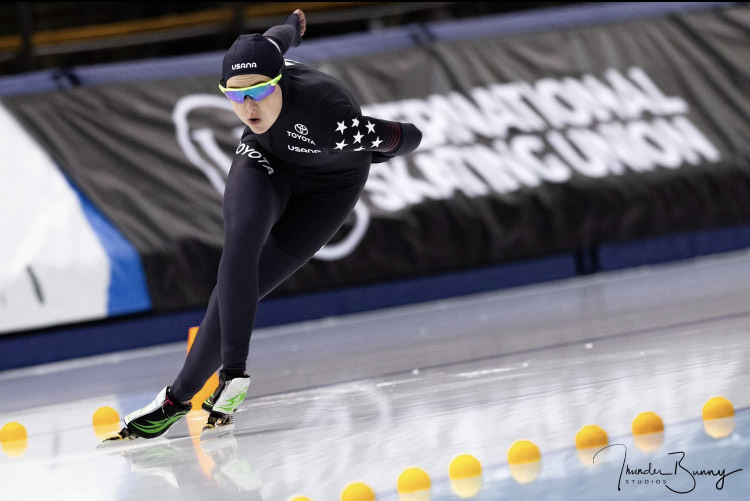 Cheyenne-born Team USA speedskater Brianna Bocox races in a meet. The 24-year-old Burns High School alum will have to wait at least four more years for another shot at the Olympic Games. (John Kleba)

CHEYENNE, Wyo. — The deck has been stacked against Brianna Bocox — a 24-year-old Cheyenne-born graduate of Burns High School — in her sport for a while now.

Southeastern Wyoming isn’t exactly a factory for future Olympians, especially in her sport, long track speedskating. In fact, the reason she got into the sport in the first place was an original love of inline skating, plus only a recent switch in the past few years to ice.

Compared to some of the best in her sport (like 1,000-meter world record holder and fellow American Brittany Bowe, who’s been winning speedskating world championships since before Bocox began training on ice in 2017), Bocox got a late start. Despite this, it’s propelled her to a status as one of the country’s best skaters.

Proving her might against the world’s best at an Olympic Games, however, will have to wait.

Bocox placed fifth in the 500 meters and fourth in both the 1,000 and 1,500 meters at last week’s U.S. Olympic Speed Skating Trials at the Pettit National Ice Center in Milwaukee, Wisconsin. And though the results proved once again she’s one of the best American athletes on ice, it did not qualify her for one of two spots in each event to be representatives of Team USA at next month’s Beijing Olympics.

Her dream of being one of Wyoming’s few but proud list of Olympians — joining the likes of Lance Deal, John Godina and Rulon Gardner — will have to wait at least another four years.

“I’m definitely still processing it,” Bocox said. “It’s a long four years. … My main goal was to give it my all, and I can honestly say I did give it my all, and it just wasn’t enough at this given time. And so I need to go back to the drawing board and figure out how to obviously get better. … There is a ton of hurt in my heart and obviously, I’m disappointed.”

Team USA has a loaded roster of speedskaters, making for an uphill battle for qualification to China in every event Bocox competed in. American teammates Erin Jackson and Bowe are the world’s No. 1 speedskaters in the 500 and 1,000, respectively, with Bowe being the world No. 2 in the 1,500 per International Skating Union rankings.

Bocox’s strongest event, the 1,000 (which she is ranked 31st in the world as well as the third-ranked American), was her first event of the week, but when she finished fourth behind qualifiers Bowe and Kimi Goetz, chances of her getting to China became slimmer. Solid, but not top-two, finishes in the other two events followed, making for an unceremonious weekend for Bocox.

Speedskating’s margins are ridiculously thin, evidenced by Jackson slipping in the 500 and originally not qualifying for Beijing in her signature event (Bowe later willingly gave her Olympic slot in the 500 to Jackson in an act of selflessness). That mutual respect Bocox has for her teammates makes it easy to root them on in a few weeks, even if she’s not going herself.

“At the end of the day, it’s whoever shows up that day,” Bocox said. “I hold no animosity toward any of them. I know how hard we train and sadly, we only had a couple of spots. I’m behind them, and I’m cheering them on as they go to the Games and I hope they bring back some hardware. That accomplishment is just as much of an accomplishment for myself because I do train with them and I do push them and I make them be better.”

So, what’s next for Bocox? For now, she’s back in Utah, where she trains full-time, for a “much-needed” recovery. But the four-year grind for the 2026 Winter Olympics in Milan will begin soon, which by then a 28-year-old Bocox, around prime age for most elite skaters, could be right at the forefront of Olympic qualification with sustained improvement and growth.

Family support is a massive motivator for Bocox, too, like when her mother flew to Milwaukee — despite a late ruling from U.S. Speedskating that the Trials would be held without fans — to be there for her daughter no matter what happened, watching streams of the event in the Pettit National Ice Center parking lot.

In any case, Bocox doesn’t plan for last week’s Trials to be her career crescendo. If anything, she could just be getting started.

“I want to prepare myself to commit to another long four years, because I don’t want this to be how my story ends,” Bocox said. “I believe I am good enough to go to the Olympics and right now, God did not have that in my plan. And so I need to go back to the training board because I don’t want to go to the Olympics just to have the name ‘Olympian.’ I want to go and compete.”