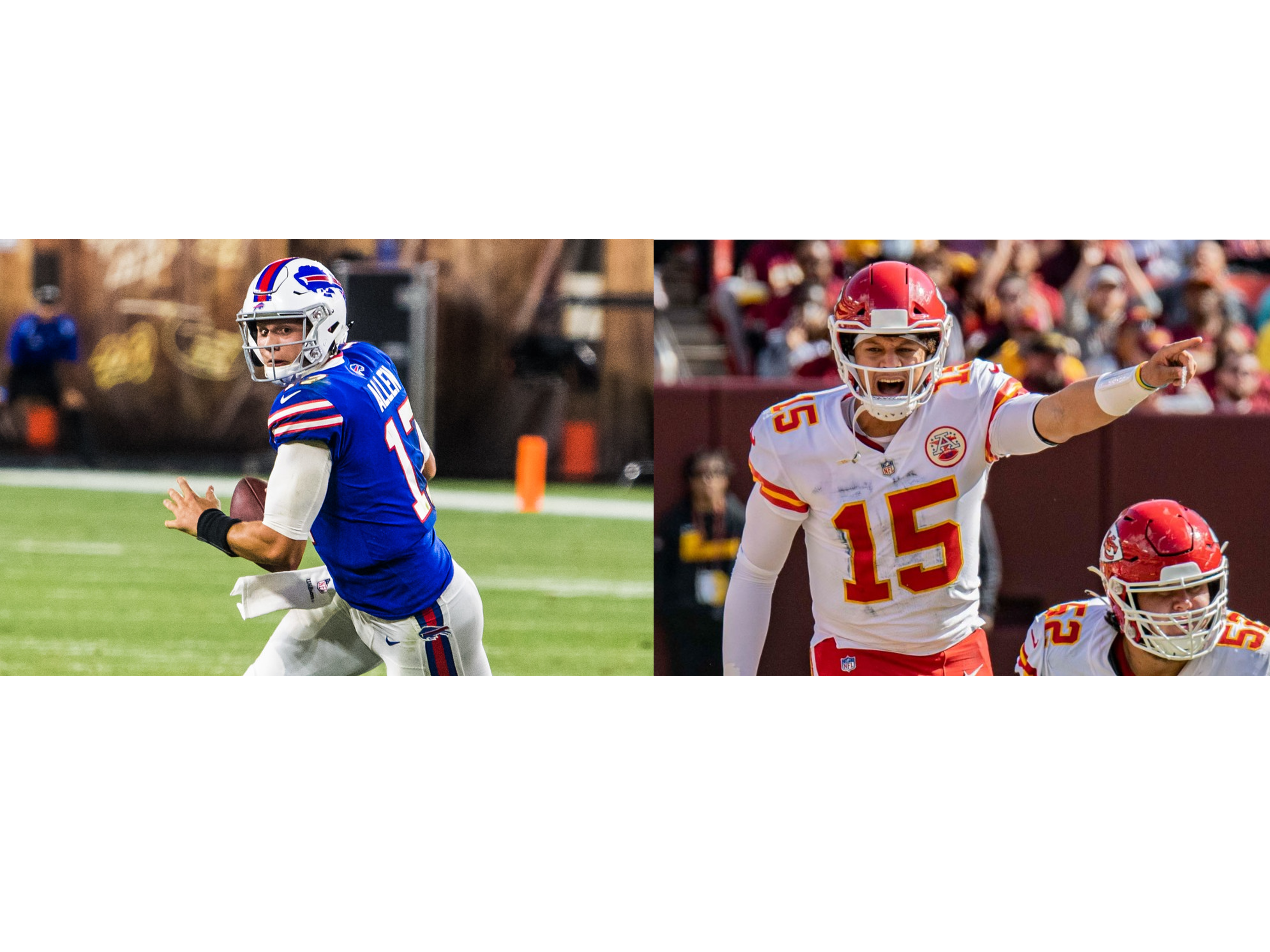 The obvious and otherworldly talent of Kansas City Chiefs quarterback Patrick Mahomes does have a certain caveat.

For as many ridiculous things the former NFL MVP and Super Bowl champion can do with a football, he has just about as many offensive weapons at his disposal. Tight end Travis Kelce is one of the best ever at his position, wideout Tyreek Hill is one of the fastest players ever to play and receiver Mecole Hardman is a Pro Bowl punt returner with added explosiveness.

Who does Buffalo Bills and former Wyoming quarterback Josh Allen have around him? Other than All-Pro wide receiver Stefon Diggs, a terrific pass-catcher that’s among the NFL’s elite, the remainder of the Bills offense is filled with veterans past their prime, journeymen or promising (yet still a bit raw) youngsters.

Many games, Allen is asked to do far more than just sling the pigskin as both an elite passer and a key member of Buffalo’s rushing attack. It’s a workload that’s earned the respect of one of the best arms to ever grace the game.

“He’s a tremendous player,” Mahomes said of Allen in the Chiefs’ press conference this week. “I actually know him a little bit off of the field as well — great dude. They put a lot on his shoulders and he rises to the occasion. He’s able to run the ball, he can throw the ball, he has the arm strength to throw it anywhere on the football field and he makes great decisions. … We’ll probably play them a lot of times. It’ll be great competition.”

Much of NFL history can be summarized in eras of great quarterback battles. There was Bart Starr vs. Johnny Unitas. Terry Bradshaw vs. Roger Staubach. Troy Aikman vs. Steve Young. Peyton Manning vs. Tom Brady.

And as a fresh guard of elite quarterbacks enter the fray with Manning retired and the seemingly-ageless Brady still going strong with the Tampa Bay Buccaneers, Mahomes and Allen could fill that void for the new age.

Rivalries like those mentioned tend to develop when two elite quarterbacks around the same age tend to meet often in constant high-stakes scenarios. With Mahomes and Allen, those moments are beginning to happen more and more often. Take the most notable of Mahomes and Allen’s three prior career meetings in last year’s AFC Championship Game, for example, when Mahomes outdueled his counterpart in a 38–24 Chiefs win.

Almost exactly a year later, there go the two signal-callers again, dueling for the right for their team to move on in the playoffs in the AFC divisional round at 4:30 p.m. Sunday in Kansas City.

“That’s the nature of the business,” Allen said in the Bills’ press conference this week. “We know in this league the quarterbacks, they get a lot of the praise and they get a lot of the hate and the downfall and all that stuff, too. … To think about people saying [we’re a rivalry], it’s obviously pretty cool to be in that conversation with a player who’s won MVP and won a Super Bowl already. He’s done all the major things that you want to accomplish in your career, and obviously he wants more, too.”

What might just kick the emerging battle between the two quarterbacks into overdrive, however, is if Allen eliminates Mahomes and the Chiefs out of the playoffs for the first time in his career on the road. In fact, he’s already beaten Kansas City at Arrowhead Stadium once this season.

Back in Week 5, Allen threw for 319 yards and three touchdowns while running in for another score in a 38–20 beatdown of the Chiefs. It was likely the kick in the teeth Kansas City needed to get back to the level of explosiveness that’s taken it to two straight Super Bowls: Mahomes and Co. has gone 11–2 since the Bills’ loss, with the quarterback throwing five touchdowns in just over 11 minutes against the Pittsburgh Steelers last weekend in the AFC Wild Card round.

Great teams adapt with what works over the season, and great players lead the way to doing that. As Kansas City has tweaked its ways to success, Buffalo will need to do the same to stay alive in the playoffs.

And the Bills could do a lot worse than Allen for players to lead the charge to do so.

“It’s easier said than done, I’ll tell you that,” Allen said of Buffalo’s plan to beat Kansas City for the second time this season. “They don’t lose many games in the playoffs, especially at home, and they’re playing some really good football right now. I think everybody in the world knows who the Chiefs are, and they’re hard to beat. … We’ve got to go put our best foot forward and try to execute a good game plan.”